I Love Island Milk campaign gets off to a great start

The ‘I Love Island Milk’ campaign got off to a great start this weekend at the Garlic Festival. This in from Andrew Turner’s office in their own words, Ed 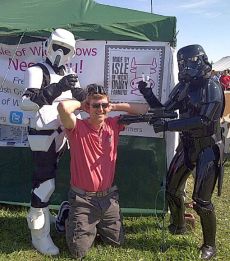 The ‘I love Isle of Wight Milk’ campaign got off to a flying start yesterday at the Garlic Festival in Newchurch last weekend.

Hundreds of people visited the stand to find out the facts about dairy farming on the Island and even two Star Wars Storm Troopers took a break from dealing with uprisings against the Galactic Empire to down a refreshing glass of Island milk.

It is a nationally recognised problem – but on the Isle of Wight costs are even higher due to ferry charges so the situation is even worse.

Launch at Garlic Festival
The first day of the campaign on Saturday at the world-famous Garlic Festival included free milk tastings and the first chance to sign a petition asking Island supermarkets to sell Island milk.

Justin Birch, chairman of the Island dairy farmers group, said, “When the Imperial Army of the Dark Side makes a special journey from the Death Star to come and taste the Wight Stuff you must be doing something right. 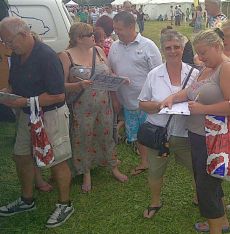 “I thought about asking them to take a bottle back for Darth Vader – but our milk is full of goodness so it would probably not go down very well with him. However, it was going down well with everyone else yesterday and people were amazed to hear that supermarkets are shipping milk over from the mainland whilst Island milk is being taken over there.

“The Garlic Festival has been great for us so far and we are looking forward to doing it all over again today. Everyone seems to be having fun and there is lots to see and do. So if you are heading down to the Garlic Festival today please make time to come and say hello and taste our delicious milk.”

newest oldest most voted
Sam
â€œbut our milk is full of goodness…” No, it’s full of Bovine Growth Hormone, anti-biotics, blood, and pus. Even if it didn’t have any of that stuff it still wouldn’t be good for us on account of the fact we’re not calves. You wont catch me drinking any of that stuff and if i had kids i’d certainly never feed it to them because it leaches calcium… Read more »
Vote Up00Vote Down
Old Knobby

Lucky it doesn’t then, as Bovine Growth Hormone is banned in the UK and Europe…

So we are all going to be poisoned by milk then, are we?

Too late, I have been drinking it for over 60 years – obviously takes a long time to kill you!

I don’t know how the campaign is going re higher prices for Island farmers, but Lidls have reduced their milk from £1 to 98p