The fourth round of the 2019 Winter Series Trials Championship Sunday 3rd March at Newbarn Farm, Calbourne saw five youth riders. See how they and others got on. 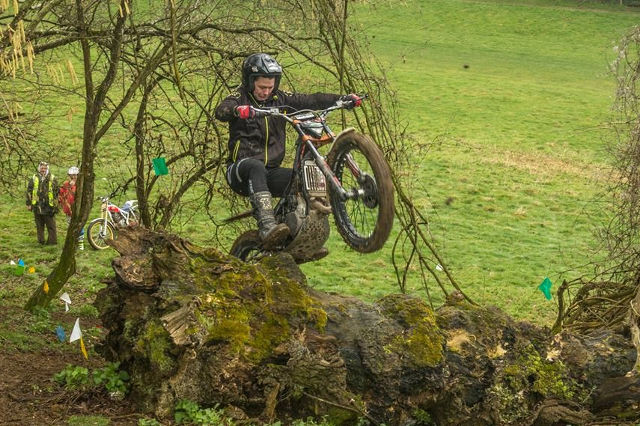 The Isle of Wight Motorcycle Club held the fourth round of the 2019 Winter Series Trials Championship (The Novice and Expert Cup) on Sunday 3rd March at Newbarn Farm, Calbourne. The Club would like to thank Mr Chris Spence for allowing us the use of this excellent all-weather venue. We would also like to thank the Course Setters; James Stay and Rob Howard, assisted by Dan Flux and Rob Baker, between them they set eight superb sections – something for everyone, top drawer stuff.

All clubs tend to rely heavily on volunteers to help out and we are no exception! Very many thanks to the Observers and to Viki Taylor (Club Photographer) who all braved the leading edge of Storm Freya, to help ensure a smooth running event – a good team effort people. I trust you all got home in good time to get dried off and warmed up.

The Club would like to extend a very warm welcome to four new members; Gill Locke, Tom Richards, Mark Grieve and Bertie Grieve. We hope they enjoyed the trial and we look forward to seeing them back out again very soon.

Youth riders
It was really encouraging to see five youth riders at the trial, headed up by Alfie Haydon in the Youth Intermediate class. Alfie only lost marks on four of the eight sections to end the day with a total of thirty-seven.

Dan Locke (pictured below) took the win in the Youth Novice’s despite a determined effort from Josh Morris, fourteen marks between these two. Meanwhile Alfie Gaskin (pictured below) put in an excellent performance to take his first win in the Youth Beginners. Alfie completed the four laps of eight sections for a loss of only fourteen – this is an exceptional ride considering it was his first full trial. Young Bertie Grieve (pictured below) signed on for the trial but decided to take the opportunity and treat the afternoon as a practise session. He did have a go at some of the sections and from what I saw, he seemed to be having a great time. Expert class
Only two Expert riders competing for the win – which was taken by James Stay with a total of fifty-two. Rob Howard finished twenty-six more behind, not helped by no less than four maximum five point penalties on lap one!

Very uncharacteristic for such an accomplished and steady rider – good effort by James none the less, although it wasn’t all plain sailing after his throttle jammed open exiting section two – luckily after some ‘precision adjustments’ he was able to regain control in time, to prevent any damage to the motor!

Intermediate class
The very well contested Intermediate class proved to be a much closer contest resulting in a win for Mark Coombes, thirteen clear of Ben Brodie in second with Shaun Harris just one more behind in third. Arguably Brodie’s best performance since moving onto the B route. Dan Flux and Scout Gregory were only a few more marks adrift finishing in fourth and fifth respectively. Two ‘over 50 B route’ riders, both piloting their brand new Gasssers; Simon Newnham recorded an emphatic win loosing just eight marks – the lowest score on the B route by any rider – proving that youth and enthusiasm are no match for old age and treachery! Malcolm Hawkins was the second place finisher today but, once he has mastered the new bike, we can expect him to be much more competitive.

Clubman class
There was a surprise winner in the Clubman class, new member; Tom Richards took the win four ahead of Scott Milton in second with Colin Brodie in third – only twelve marks between the three. Over in the Novices, Steve Chase took what proved to be a comfortable win, by twenty-two, from in second Joe Taylor. Steve has to be pleased with this result finishing so far ahead of one of the Club’s ever improving riders. Gary Jones (Sportsman class) almost finished the trial with a clean sheet, however the greasy uphill exit on section three caught him out for one mark, on his final lap, spoiling his otherwise perfect punch card – very good effort though.

The Club’s flagship event, The Wight Two Day Trial (27th & 28th April 2019) will soon be upon us! The trial is limited to a strict 150 riders. The entry is now well over half full. Please remember to get your paperwork in sooner rather than later to avoid disappointment.

Entries must be received on or before April 19th – No late entries can be accepted.