There was some great action from riders of all ages at the Pat Death Summer Series trials Championships last weekend. 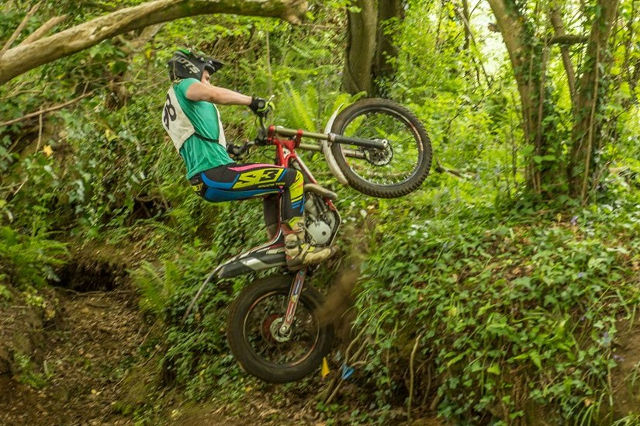 The Isle of Wight Motorcycle Club kick started this year’s Summer Series Trials Championships on Sunday 19th May at Pagham Farm, Rookley. The Club would like to thank A.B. Farms for welcoming us back to what is an excellent venue. Many thanks to Michael Brown and Geoff Taylor for cutting back the overgrowth last weekend.

Geoff Taylor had the sole responsibility of setting the eight section lap and he managed to provide something for everyone – very well done Geoff. Thanks also go to the volunteers who gave up their time to Observe the trial along with Photographers; Viki Taylor and Gill Locke.

Adult riders must complete all three rounds (in the same class) to be eligible for an award.

Almost perfect conditions
The weather conditions were just about perfect, slightly overcast but crucially warm and dry meaning there was plenty of grip to be found in the higher sections away from the stream.

It was really good to see Elite riders; George Gosden (pictured above and below) and Josh Stephens in action, adding some super hard deviations to some of the sections. George had the upper hand dropping a miserly two marks with Josh finishing ten more behind. Nevertheless, these two provided some great spectating whilst inspiring the younger riders.

James Stay was out on his own in the Expert class, despite the lack of competition he completed the trial with a competitive score of just eleven. James cleaned every section except seven and eight where he lost almost all his marks.

Over 50s
Things were very much closer in the Over 50s, between Simon Newnham and Rory Stephens. Six marks between them, not even the difficult triple root exit from section seven, helped to separate them – they both lost just a single mark there.

Section three is where all the difference was made, Rory lost over half his total  – which ultimately cost him the trial. Scott Milton (pictured below) continues to enjoy his spell of good form in the Clubman class, securing another win, with a thirty-two mark cushion, from in second Phil Chase. Sections one, three, four and five proving decisive.

Novice class
Meanwhile over in the Novice class it was Paul West (pictured below) who held his nerve to stay ahead of Joe Taylor in second – only seven marks between these two. Steve Chase found sections four and five very expensive, relegating him into the third spot.

Nick Symes (Twinshock) and John Townsend (British Bike Class) both secured the maximum ten Championship points getting their Summer Series campaigns off to a flying start.

Adult Beginners
Kevin Smith won the Adult Beginner class very convincingly by sixty-nine marks from the relatively new rider Mike True in second. The gap between these two is somewhat distorted. It’s not clear if Mike had a mechanical problem or sustained an injury but he was much more competitive on the first two laps.

Dan Locke took a convincing win forcing Alfie Gaskin into second spot – helped no doubt by his new Bike which he is obviously very quickly getting to grips with.

Unfortunately Josh Morris was carrying an injury sustained at an earlier practice session at home, he was forced to retire soon after the trial started.

Bertie Grieve continues to gain in confidence with every outing, its clear to see he thoroughly enjoys the sport – rewarded with ten Championship points. The pick of the bunch in the Sportsman class was Jono Read, he was taking on the ‘C route’ and completed the trial for just a single dab – a foot down at section four spoiling an otherwise clean sheet.

The full results are available from the Club Website.

Next meet
The Club next meet on Sunday 16th June for round two of the series.

Please keep an eye on the Website (Events) where all the details will be published just as soon as they have been finalised.