All the Isle of Wight TT details you want to know, that News OnTheWight learnt when meeting the team behind the new event, including the map of the course and 200mph+ down the Military Road! 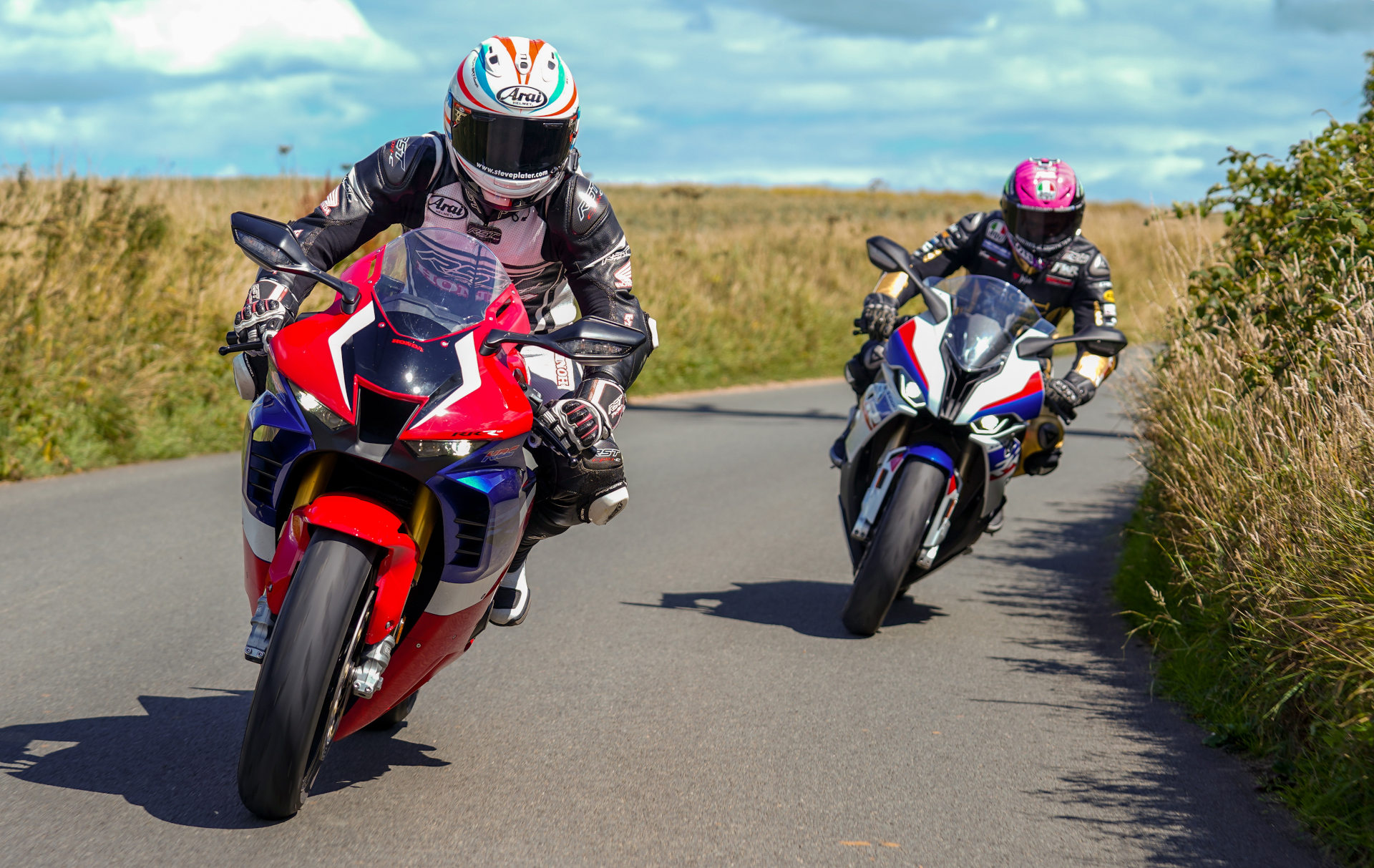 The Isle of Wight TT / Diamond Races motorcycling race comes to the Island in 2021.

If you’ve never been a biker, you probably don’t realise quite how massive the Isle of Man TT is in the biking world – it’s a Mecca.

From next year, the Isle of Wight will be hoping to grab a slice of that action with the launch of what one Superbike rider told News OnTheWight was a “spectacular” circuit, that “exceeds expectations” and has “a little bit of everything” – including a 200mph+ section.

The Isle of Wight’s first TT
The Diamond Races is an all-new motorcycle road racing festival, featuring some of the top names in the sport and expected to attract around 50,000 people, extending the Island’s summer season.

The Isle of Wight’s first TT is looking likely to be held on 13th-17th October 2021 (at the end of the 2021 British Superbike calendar), with a 12.4 mile-long course in the south of the Isle of Wight playing host to the event.

The event will see competitors complete time trials through the villages of Chale, Kingston, Shorwell and Brighstone, before hitting a five-mile stretch of the Military Road.

There’ll be Superbikes, Supersport and lightweight bikes taking part, as well as demo rides of sidecar racing, not to mention an electric category in the future.

For the 2021 races you can expect telemetry about the bikes and riders, as organisers say they plan to make the races “as digital as they can be”.

Years of hard work, dedication and planning
The Races are the brainchild of two Isle of Wight residents (James Kaye and Paul Sandford) and has support from the Isle of Wight council.

CEO and co-founder, Paul (pictured above), who presented the idea to the Cabinet in the early stages of planning, said,

“As an Isle of Wight local resident, I am very excited to welcome motorsport fans from across the globe to this beautiful Island, for what is sure to be an unforgettable weekend of racing action and entertainment for the whole family.

“The Diamond Races is the culmination of years of hard work, dedication and planning by the whole team, and we’re very lucky to have the best of the best involved with its setup. No stone is being left unturned in striving to deliver a spectacular event which we have every reason to believe will be a regular back-stop to the Island’s tourist season and put the Isle of Wight on the international motorcycle road racing map.”

The ‘Dream Team’
Described to News OnTheWight by a motorcycling trade magazine journalist as the ‘Dream Team’, those involved include the man in charge of safety at the Isle of Man TT, former British car championship drivers, as well as a past Isle of Man TT Senior winner and ex-British Champion.

Meticulous attention paid to safety
The safety of the riders, spectators and officials is paramount to the organisers and the race meeting will be run under strict event regulations stipulated by the sports’ governing body, the ACU (Auto Cycle Union), through which all UK motorcycle sport is administered.

Gary Thompson – who’ll be in charge of safety at the event – has been the Isle of Man TT course manager for the last nine years. He says road safety will be at the heart of the Diamond Races which plans to incorporate a strategy to promote road safety.

What’s happening when
The races will see two days of practice, on the Wednesday and Thursday, as riders get used to the course. Friday will be a rest day and the excitement arrives at the weekend, with Saturday being race day.

Although not confirmed yet, Sunday may include some limited public riding (in a controlled way).

In 2021, there are expected to be somewhere between 30-36 riders, with the bikes setting off from the start line every ten seconds.

The best of three possible courses
There were three courses originally proposed, but the final selection in the south includes fast (the Military Road) and technical sections (through the villages) providing some great challenges for the riders.

The road surface was found to be excellent, but before the races can take place there are 2,500 white lines that need to be treated, 177 manhole covers will be coated for safety, the removal of 1,500 cats eyes, as well as a small number of telegraph poles as they are in the direct line of bikes on some of the challenging sections of the course.

Walls will be protected, all road signage will be removed beforehand and returned after the event, as well as the cats eyes and telegraph poles.

How much to put on?
Clearly putting an event on like this isn’t cheap, so News OnTheWight asked the team how it was being funded.

To date it’s been self-funded, but the cost of putting on the event would be between £2-5m. Organisers say they are in the process of securing funds.

Find out more
Residents on the course were informed by letter on Tuesday of the plans, with the founders offering more details over the coming months of how they plan to work with them.

Look out for upcoming News OnTheWight podcasts with several members of the Diamond Races team.

You can find out more by visiting the official Diamond Races Website.

23 Comments on "Isle of Wight TT: The Diamond Races are coming (Circuit map and photos) (updated)"

The time to engage locals was at the beginning not now. And its not just polite because those are the people who have to live through the noise and chaos. I’m going to run a local survey to find out genuine opinion as neither the organisers or the Conservative Council have done that.

You’ve never seen the real TT then. We just tie a straw bale to any telegraph pole, phone box, etc.

In the report, it says ‘relocate telegraph poles’. Where’s the truth? take out 1500 cat’s eyes? Do they do that on the IOM? Anti slip on white lines? I like to seek the truth……

@Chartman I think it was 3-4 specific telegraph poles that needed to be removed. Simon was told this directly by the organisers as he was driven around the course.

Vote Up23-4Vote Down
Tamara
Has anyone thought of the impact on the lives of those living and working in the villages and countryside along the route? Are the roads going to be closed to ordinary traffic for five days, from the Wednesday to the Sunday, inclusive? How will people go about their daily lives? What about the safety of pedestrians, of cyclists on narrow, winding roads, getting to work or going… Read more »
Vote Up78-38Vote Down
seadog

This is an entirely irresponsible decision and very disappointing for road safety on the isle of wight. Has everyone forgotten that in 2019 the military road was named one of the top 10 most dangerous roads in the UK, this event will only encourage reckless driving and result in many more deaths.

Thanks Manxman – we’re new to this TT lark, thanks for the guidance and it’s good to hear from the experts.

Vote Up18-5Vote Down
Colin
Given the deaths and accidents over the past few years along the Military Road through dangerous and careless driving, I can’t at the minute think of anything more unsuitable for this stretch of road. As many of the Parish Councils and residents have regularly complained about the antics of speeding drivers for years, I can’t see how an event like this is going to help a decrease… Read more »
Vote Up83-57Vote Down
hermit
All of the accidents along Military Road involving a motorbike have been as a result of a car or van pulling out on a motorcycle, either at a junction, or from poor overtaking of the car/van. With closed road racing, and experienced riders, although not without risk, this will be an awesome safe event, bringing in millions to the Island economy, both in pounds and smiles. Come… Read more »
Vote Up60-73Vote Down
mikeiow
Strange comment: by this logic, we’d best cancel Monaco GP, Singapore, IOM TT….heck, let’s remove the Tour de France, Tour of Britain whilst we are at it! The riders are time alone – it isn’t a race with pile-up’s on the first bend ;) I just hope the Island gets behind hosting such an awesome event – far enough off to hope that Covid will be behind… Read more »
Vote Up50-67Vote Down
Spartacus

Won’t that clash with Beer and Buses?

Vote Up23-1Vote Down
Steve Goodman
This year’s B&B was cancelled in April: “Beer and Buses and the Coronavirus It is with great regret but after very careful consideration of all the facts, Ben and I have decided to postpone The Classic Buses, Beer and Walks Weekend until 2021. Cancellation of this year’s event was an extremely difficult decision to reach. We will make every effort to inform all involved as soon as… Read more »
Vote Up42-1Vote Down
Spartacus
Absolutely senseless and yet again no consideration for residents. The IOW has more fatalities than anywhere in the country so not only do we have more cyclists to look forward to (NOT) now we have a TT pathetic, inconsiderate, and dangerous encouraging more two wheel morons who think they are Barry Sheen. The agenda of course as usual is money, money and more money. WHAT about people… Read more »
Vote Up47-30Vote Down
davimel

Phew, glad it isn’t going through Arreton… might never get a second year if it did. Good news IF it happens, we have the ‘blessing’ from Dave, so that already puts a few potential issues in place, but if it can be done with minimum input from our Jobsworths, it may well be a bonus for us.

Vote Up35-44Vote Down
Chiverton Paul
At last something refreshingly different for the island. Having viewed the bios on their website the team putting this together seems to have a professional background in this type of event. This appears to be a ‘when’ it happens, not ‘if’. Greta news for the local economy. The other thing to stress is that this is not a mass start event, it will be individual bikes timed… Read more »
Vote Up48-75Vote Down
tosh
Great idea just what the Island needs having been to the TT races on the Isle of man this would be a shorter version . But I fear that there are those that have retired to the Island will not want this as they would like to keep the Island in the dark ages. Just look what happened to the Moto cross track at Arreton . I… Read more »
Vote Up45-76Vote Down
chartman

I’m retired and welcome it. WE shall have to wait and see if it comes to fruition…

Bring it on! Just told the family, spare bedrooms already booked! Just got to work out how much I’m going to charge for off road parking!

Typical response forget about safety, noise and pollution, how much money can we make. How sad