Launched in March this year with a government grant of around £40,000, Isle of Wight Twizy Hire has gone out of business just as Cowes Week is about to start. 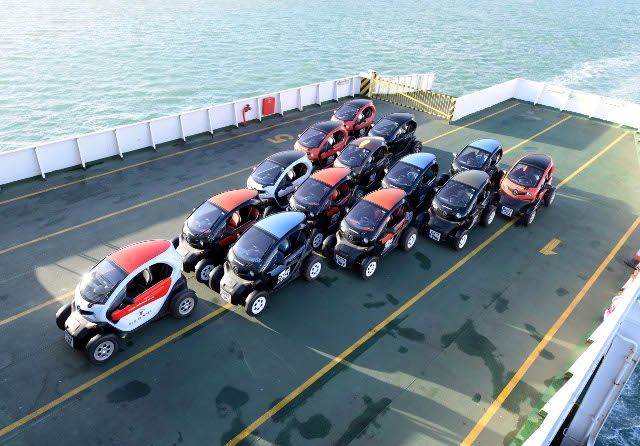 OnTheWight has learnt that Hire A Twizy Isle of Wight has gone out of business.

A customer, whose partner had booked six Twizys for this coming Sunday, told OnTheWight the business had closed down.

“We’re as disappointed as anyone when we heard yesterday. We understand the Isle of Wight part of the business has gone really well, but there’s been problems at the New Forest end.

“Given how popular it has been here, we hope someone can find a way to start it up again.”

Fifteen Twizys were available to rent on the Isle of Wight.

OnTheWight attempted to contact owner, Chris Beach, at the main business number in the New Forest, but all calls go to answerphone. The booking page on their Website has been removed.

What a shame! They were such funny little busy bees whizzing around… Lets hope someone else can re-start this. Electric bikes would be welcome too!

They actually have electric bikes available to hire from the Guild Hall in Newport :)

Vote Up00Vote Down
Steve Goodman
(OTW, last September) “Building on the established ‘Drive Less See More’ ethos, this week the Isle of Wight received another boost with the award of £70,000 for an innovative sustainable transport scheme that will bring 25 electric hire bikes to the Island by the end of 2015. The Red Squirrel Bikes funding bid was put in by Zoe Stroud, LSTF Visitor Project Manager at Visit Isle of… Read more »
Vote Up00Vote Down
Greg

I doubt they will get any of the money back since it has probably been spent on branding, advertising and non-refundable product. The money was through the LSTF fund, so even if they did get some money back – it would have to be spent in sustainable travel only.

I hired one of these a few weeks ago and it was great! I was hoping to hire 12 for a group of us later in the year….shame

I have seen them around , shame about going out of business, I think there should of done a big promo and have never seen electric bikes for high on the island

There are electric bikes for hire in Lake, so-called ‘high bikes”, a form of electric mountain bike which can take you up any hill! Feels likes flying! They should have them at every ferry port….

Sad to hear of twizy demise is it for sale? Would be interested.

I agree it is a such shame.

Or such a shame, sorry!