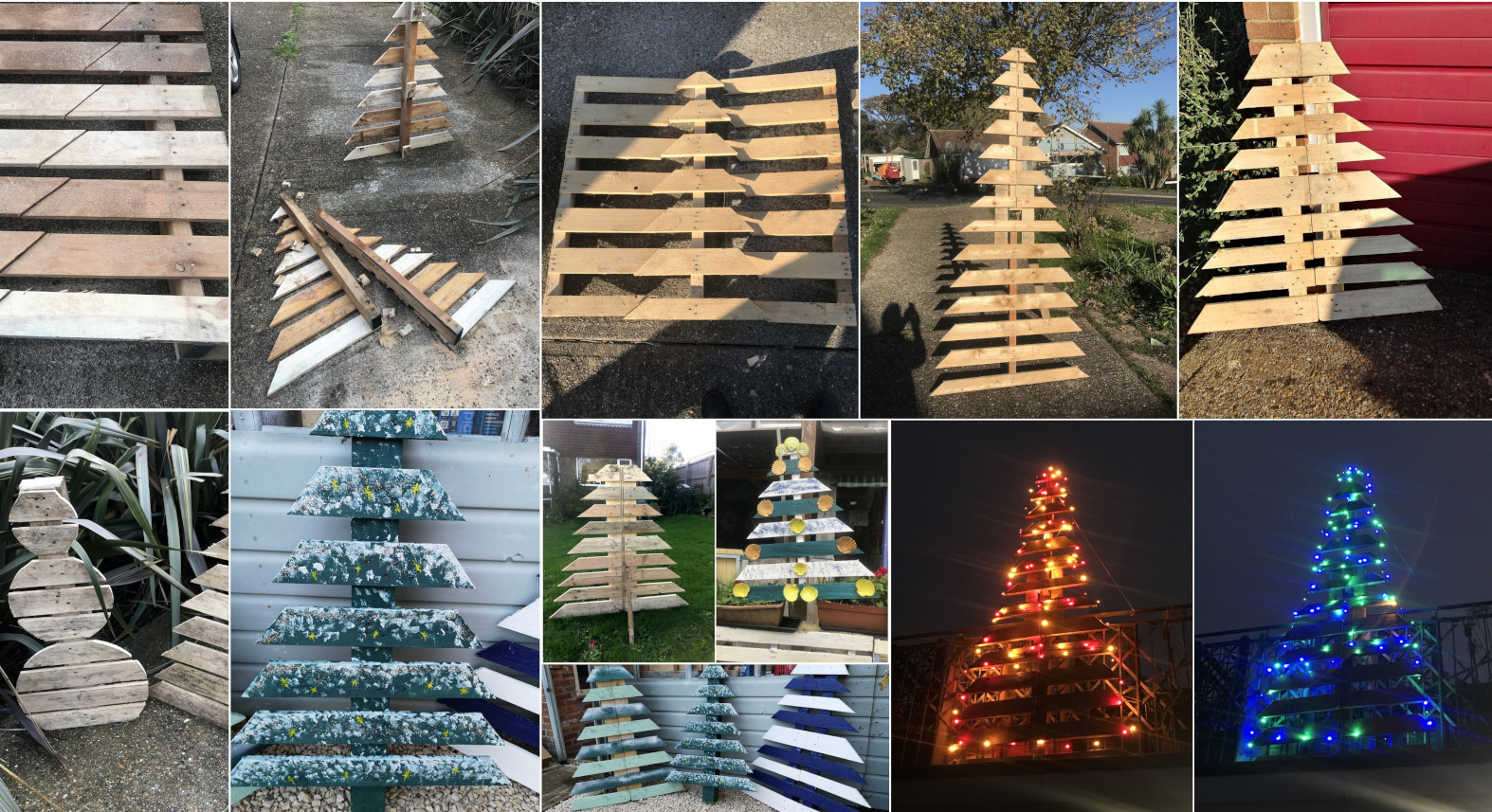 Many in the community of Nettlestone and Seaview (N&S) have taken to social media to express their dismay after handmade wooden Christmas trees were removed from around the villages.

As reported by News OnTheWight last month, the wooden Christmas trees were created from pallets by the men and women of the N&S shed.

All trees removed
Lee Warren posted the news to the Seaview and Nettlestone Community Page on Thursday, saying

“So today the lovely Pallet Xmas trees that were made by the local men in sheds group and painted by various people in the community were removed from around the village, due to some local person complaining that they are a health and safety risk and Island Roads getting involved and wanting them removed!

“Most of the pallet trees were tied to posts (which if you walk with your eyes closed are also a H&S risk). We have had real trees in the village in the same spot for the last three years with no complaints or injuries!

“If someone raises it or complains, Island Roads have to pay the council a set amount for each week they are there, if we do not remove them.”

News OnTheWight got in touch with Island Roads to confirm why the trees were removed, whether they have been returned to the N&S Shed and where they can be placed.

“We became aware of these Christmas trees when the person arranging their installation called Island Roads on Thursday evening. After being given our advice around the process to follow to ensure that anything added to the road network does not compromise the safety of road users and pedestrians, the organiser elected to remove the trees. We have had further conversations with the organiser today (Friday) and we are looking to work with them to identify suitable locations for the installation of the trees so that everybody can enjoy them but can also be kept safe during this festive period.”

Offers from locals
There appears to be a local determination that the trees continue to light up the villages over the festive period.

Many residents commenting on the Facebook thread stepped in to offer their gardens as locations for the pallet trees.

Some trees to be auctioned
Rob Webb from Nettlestone and Seaview (Men & Women’s) Shed said he was “completely demoralised by local bureaucracy”.

Over £500 has already been raised for Shed’s charity, and Rob has decided that the 8ft pallet tree will be auctioned off to the highest bidder, with 100 per cent of the proceeds going to the Shed (Charity No. 1189878).

If you wish to bid for the pallet Christmas Tree, pop over to the Nettlestone & Seaview Shed (NaShers) for more details.

Obviously complained about by a very SAD person (someone suffering from Seasonal Affective Disorder). I found a sign, pinned to one of the posts which read ‘Bah humbug!’ and signed S C Rooge. I almost had a serious accident, nearly pricking my thumb with the drawing pin – but I broke a nail trying to get it out of the post.

Vote Up70-1Vote Down
Benny C
Come on Mr Ward, you’re cabinet member for infrastructure, explain this. Maybe perceptions are different from reality, maybe you actually read the terms of the island roads contract before you signed our money away, or maybe, as you allegedly claim yourself, you didn’t bother to. Try not to duck the issue for once. This is yet another sum of money spent not for us but on something… Read more »
Vote Up50-5Vote Down
Angela Hewitt

Why cut down a living tree when you can have these wonderful hand made creations. Far more carbon friendly.

It has no credibility whatsoever!

Do some PROPER journalism and get to the bottom of it.

Vote Up19-59Vote Down
Sally Perry
To be clear, a representative from Nettlestone and Seaview Shed got in touch with us to explain what had happened, they then pointed us to a FB post where Island Roads were accused of removing the trees. We got in touch with Island Roads, who said they did not remove the trees. An accusation is made and denied, that’s the basis of our report. Locals were furious… Read more »
Vote Up71-2Vote Down