Last Saturday at the Newport library protest, we met with Cllr Peter LLoyd, the Mayor of East Cowes. 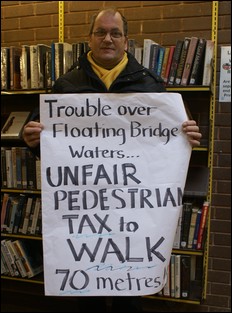 Ahead of tomorrow’s public meeting at East Cowes Town Hall (10.30am), we thought it would be good to share our discussion with Cllr Lloyd.

We discussed the proposal by the Isle of Wight council (IWC) to charge 50p per passenger, per journey, on the Cowes Floating Bridge.

Cllr Lloyd made his opposition to the proposed charges clear during our discussion.

He recognised that the IWC are in a difficult financial position, but felt that the proposed charges, as well as other changes, were being delivered very heavy handily.

Apparently, the IWC intend to collect the fares by installing personnel at the top of the slipway at Cowes and East Cowes with the tolls being collected before cars and foot passenger travel onto the bridge.

Other areas of budget proposals were raised during our discussion, click on the play button below to hear the interview.
[audio:http://otw-audio.s3.amazonaws.com/cllr-peter-lloyd-east-cowes-mayor.mp3]

So paying the wages of two more personnel (possibly?) around the clock to collect these tolls… That’s a lot of passengers before they’ve begun to break even. Especially if people with the luxury of choice decide to go via Newport in protest. I’m staggered by this.

Good luck Cllr Lloyd. Thanks for speaking out for East Cowes residents.

Vote Up00Vote Down
keithybaby
Should slow the floating bridge down considerably! Currently fares for cars are collected as the ferry is moving off and the operator just has time to collect all the fares/tickets over the short distance covered. Hope they’ve got big pockets for all the pennies we’ll turn up with! Will they be checking car boots for hidden passengers? Is it discriminating against larger families? Of course, if we… Read more »
Vote Up00Vote Down
cyclist

The floating bridge is actually part of the “cycle the wight” route. Now I suppose we will be expected to pay. Even the short river route will now cost to ride it! Well done eco-island really forward thinking!

Dear cyclist. Not sure how getting free use of a ferry is ‘eco-friendly’, no matter how short the distance. Perhaps you could explain?

Maybe if you were really concerned about being ‘eco-friendly’ you’d cycle down to Newport and cross the Medina there instead.

Oh, sorry, you just want to moan because you’re being asked to pay for a service that you use. I understand now.

Vote Up00Vote Down
Pamela
For those of you who haven’t seen it yet, the draft budget papers were published today (see below for link). Looks like 50p for every person – adults, pensioners and children, whether they are pedestrians, cyclists or car passengers. It appears that they are also raising vehicle prices 10%, reducing the discount on books of vehicle tickets from 20% to only 10%, and scrapping the discount for… Read more »
Vote Up00Vote Down
hmmm

Im quite tempted to get a rowing boat. In return for saving yourself 50p, you have to row. I’ll steer.

Vote Up00Vote Down
ThomasC
This podcast got me thinking. On 2001 census figures the IOW has a population percentage of over 65s of 22%. Let’s say Cowes is representative of the IOW and use that as the percentage of total FB foot passenger journeys made by over 65s. Wikipedia says 1.5m foot passenger journeys on the FB per year (anyone got official IWC figures to hand?). 22% of those is 335,675… Read more »
Vote Up00Vote Down
rjc
Simple answer to that, Southern Vectis could create a route across the medina, via the floating bridge,with a mini bus. Bus pass holders go free and they charge the council Â£3 p.p.per trip. Come to that they could also run to southampton bus station, might have to charge the council a tad more on the fare per person. But I believe coaches go free on the ferries… Read more »
Vote Up00Vote Down
Sailor Sam

Don’t you think SV gets enough out of the council? And coaches do not go free on the ferries, they are charged depending on how many passengers they are carrying and the consessionray scheme would not apply on them.

The coach goes free, passengers pay was what I ment.

You are wrong. Southern Vectis gets 12p for each additional free passenger journey, even if they end up having to put extra buses on. Mainland owned? Owned by our pension funds in reality I suspect!

Got any documentary evidence on that, Ed? The figure I’m using is from the podcast above, so is the mayor of E. Cowes as far out as me?

Vote Up00Vote Down
Ed
The appeal decision from 2009/10 gives the calculation for concessionary fares. Aside from a few adjustments around the edges, you take the number of journeys that used to be made before free travel. The appeal set that (this was the big arguement between Southern Vectis and the IW Council) figure at 1,450,000 journeys. To set the percentage paid, the Council estimates the number of journeys that it… Read more »
Vote Up00Vote Down
Bus Driver

SV gets almost 40% of the applicabe full fare per journey made by a concessionary passenger. So I would say ThomasC has got his facts right. Where Ed gets 12p ‘for each additional journey from, I don’t know.

Vote Up00Vote Down
allan marsh
F/B running 20 h /day /7 days a week how many staff would we be employing to run the ticket office ,even if they were employed as Tesco employees i.e 16 hour contracts so no N.I or tax paid and only 16 hours holiday pay per week, the council could announce it as great new job creation,140 hours a week x2,280 hours to be covered + supervisors… Read more »
Vote Up00Vote Down
allan marsh

Vote Up00Vote Down
DrFox
We all used to pay as passengers on the folating bridge. The last foot toll was 20 pence somewhere at the end of the nineteen eighties. Taking into account inflation (RPI) from say 1987 meand to 45 to 50p is possibly about right. After the automatic machines were installed there were also no more staff than there are now. Kids travelled free before 6:00pm, although 5-10 years… Read more »
Vote Up00Vote Down
DrFox

Just to add, when tickets were bought from the machines, it was much faster for the guys to collect tickets.