The Phoenix Choir will be performing in the church on Saturday July 21st in order to raise funds to help install water, a small kitchen and toilet so that the building will have the facilities expected of a C21 community. 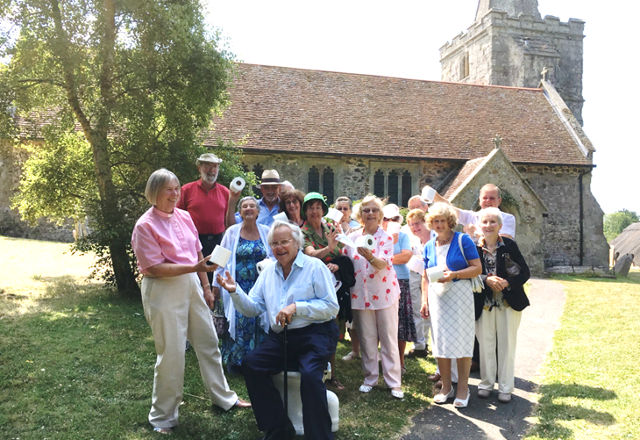 St Peter’s Church, Shorwell has gone through many changes during its life.

The North Chapel was built in the C12 and much of this remains today. Above the door is an important medieval wall painting dated to circa 1470 depicts scenes from the life of St Christopher.

Middle Ages
In the C17 the SW corner of the south aisle was added to house the Town Gun. The middle ages were a time of economic difficulty for the Isle of Wight with raids from the French and their allies and the gun was part of the Island’s defences.

The church also boasts an original C13 stone pulpit with a C17 hourglass to call to order any lengthy preacher. There is also an Octagonal stone font with a Jacobean strapwork front cover with dove finial and hoist inscribed “And the Holy Ghost descended in a bodily shape like a dove upon him”.

Latest fundraiser
Now is time for another addition, and the congregation are fundraising like mad, not only to keep this fabulous piece of social history and architecture in good order, but also to install water, a small kitchen and toilet so that the building will have the facilities expected of a C21 community.

To aid funds the Phoenix Choir will be performing in the church on Saturday July 21st at 7.30pm.

Their programme will be a wide range of easy listening songs from a number of different genres – musicals, films, country, popular, traditional, folk and even two Maori ballads.

Admission is free with a retiring collection.