The Holliday family say they will lose their home, livelihoods and everything they have worked for over the last 50 years if planning permission is granted for this development 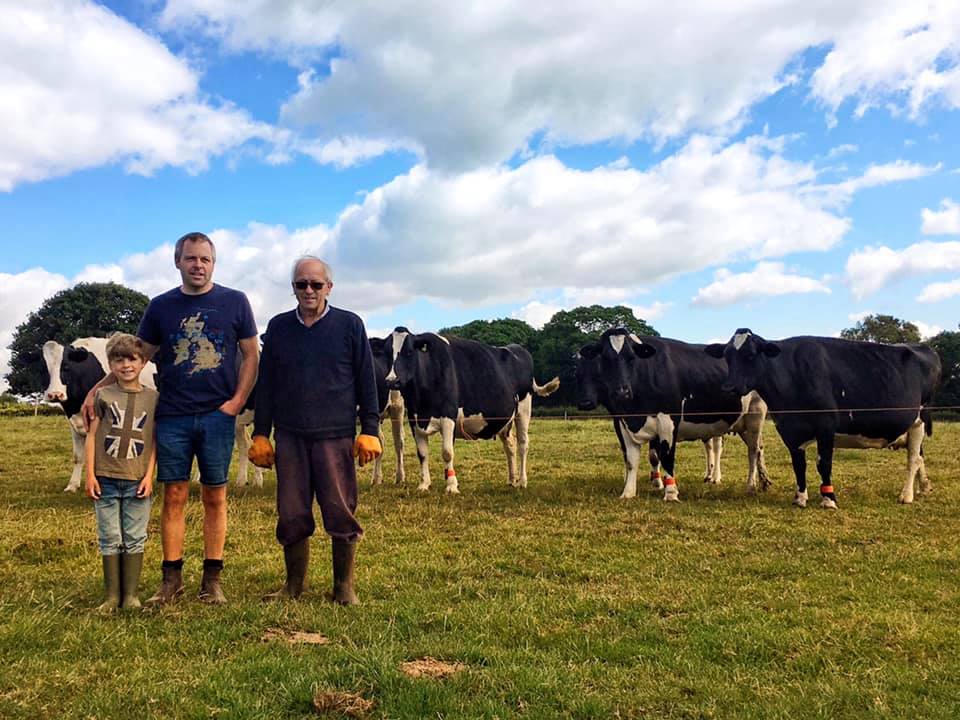 The plight of the Isle of Wight’s Holliday Family from Westridge Farm, Ryde received national attention this morning on the BBC Radio 4 Today programme.

The segment featured Nigel Holliday, who grew up on and works on the farm, as well as Isle of Wight Conservative MP, Bob Seely, who said under the new planning proposals announced by the Government last week, that “we’re going to lose democratic control”.

He argued that if people are outraged by loss of planning control or objections to specific major developments, MPs could lose seats in the next election.

Save Westridge Farm campaign
With less than ten dairy farms left of the Isle of Wight, the campaign to save Westridge Farm has bounced back into full force once again, after plans were lodged with the council for 475 news homes on the farm land.

On the Today programme, Nigel explained that to see the landscape in front of him “all go under concrete breaks his heart”.

You can watch eight-year-old Archie share his plea below

Former farmland being “decimated”
Readers will remember the hard-fought planning application in May 2017 that saw permission granted for 80 new homes, resulting in the land the Holliday family once farmed “being decimated” in front of them.

A successful dairy farm
The Holliday family have farmed the land at Westridge Farm since 1966 as tenant farmers. They are custodians of this land and have worked tirelessly for over 50 years.

They say that although they lost 11 acres to the 80 homes development, Westridge Farm has continued as a successful dairy farm.

The Holliday family say they will lose their home, livelihoods and everything they have worked for over the last 50 years if planning permission is granted for this development.

Lilley: Was driven to tears by the cruelty
Isle of Wight councillor for Ryde East, Michael Lilley, told News OnTheWight,

“I was delighted to get the call yesterday morning from the BBC Radio 4’s to link them to the Holliday family at Westridge Farm.

“I am glad our MP, Bob Seely is standing with this Ryde farming family.

“I was moved hearing granddad, Bernard, dad, Nigel, and Son, Archie (eight years old) stand together speaking to the reporter. I was in tears.

“Why does this Island family during Covid-19 have to face this planning application for 475 houses that destroys their lives.

“It is cruelty, we need this farm and beautiful historic countryside not unaffordable homes that are not needed. It has to be stopped. I call all Islanders to stand by the Hollidays.”

The developer, Captiva, argue that over 400 families would get much-needed new homes with 160 being ‘affordable homes’.

You can listen to the segment again on BBC Sounds (skip to 2.40 in).

Have your say
To view all planning documents relating to West Acre Park and to comment on the application, you can search 20/01061/FUL on the Isle of Wight Council’s planning portal.

People can comment on the proposals until 11th September 2020.

newest oldest most voted
Tamara
Whatever Bob Seely’s motives, and I am well aware that his motives tend to be personal ambition, speaking out against the Government’s plans to deny citizens their democratic right to take part in public consultations is surely a big step in the right direction for our MP. And his warning that MPs will lose seats in the next election is motive enough. His opposition to unrealistic new… Read more »
Vote Up360Vote Down
wellsm
This is a link to a document on how to oppose a planning application: http://www.hampdenfieldsactiongroup.com/wp-content/uploads/2012/04/HowtoobjecttoaplanningapplicationEbook.pdf It is long and complex but it does give guidance on the sort of issues which are valid objections as, clearly, simply saying “I don’t like it” or “it is too big” will carry no weight. It makes the point that objections need to be on planning grounds, such as the proposed… Read more »
Vote Up100Vote Down
Eagle eye
Perhaps Mr Pink should read what he has stated on Captiva website which reads: “The island has a culture and community of its own. That’s very special, something which we’re proud of. The community has a genuine sense of belonging, of connection and respect for our environment and heritage. “The island needs investment and progress, but it also needs protection and responsible development. As islanders, we are… Read more »
Vote Up40-6Vote Down
Tamara

Vote Up16-1Vote Down
Benny C
You’re confusing me, please explain. I can’t see how you can JR a planning application. You can JR a planning consent. If the grounds are there. But that doesn’t necessarily mean a reapplication will fail. Are you trying to stop the housing or stop abuse of process? One needs a well thought through planning led approach at the consultation stage, ie now. The other needs a lawyer… Read more »
Vote Up7-2Vote Down
wellsm

That is correct, judicial review in planning can be in relation to process only not the fact of granting or refusing permission.

Vote Up60Vote Down
Benny C
Thank you. So please let’s pause and think about the impact of posting a subjective inaccurate rambling story when the writer has a valid and serious point to make. Sadly, being frank, this is a bewildering mix of fact, fiction and fantasy opinion founded too much on hopes and dreams rather than logical conclusion. It undermines the argument, disrespects the audience and discredits the author. Let’s avoid… Read more »
Vote Up4-2Vote Down
truth
‘He argued that if people are outraged by loss of planning control or objections to specific major developments, MPs could lose seats in the next election.’ . Not the lying, cheating, back-handers, the threat to UK security, not the Boris Bus lie, the three-fold imminent increase to drugs prices in the UK and dismantling to the NHS, not the astronomical costing and devastating environmental damage of HS2,… Read more »
Vote Up41-13Vote Down
Eagle eye
The family were also responsible for Bullen Village and a recent development in Pondwell. The family sold all the houses they owned in Bullen Road immediately after the Hope Road development was passed. Hope Road was passed due to the family threatening the council with court action, this was stated by the then Head of Planning at a residents meeting. The same family also had planning permission… Read more »
Vote Up110Vote Down
Benny C
I’m sorry to be a pain here but it’s pointless talking to the tenant other than for PR value, which I admit seems to have worked. He signed up a lease and presumably had legal representation so the risks were understood at the time. The real focus should be the landowner who has sold out (or sold an option) to the developer. The developer is just trying… Read more »
Vote Up8-3Vote Down
peterj
The landowner and the wider family are well know to the locals, him being a business man in the local area for many decades – including Westridge Ltd (construction and skip hire) and a myriad of property businesses. Companies House has him listed as having been a director of 22 companies over the years (about 6 still active). I’m fairly sure he has been a gentleman of… Read more »
Vote Up110Vote Down