Figures released today show that 38 out of 40 Isle of Wight schools will be facing cuts to funding up to 2020. OnTheWight has the per-school breakdown. 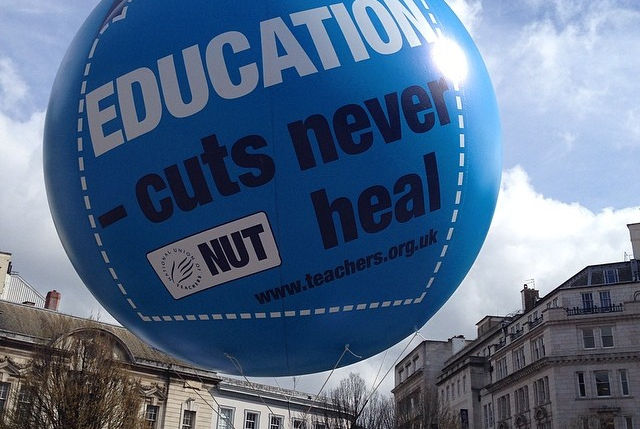 Based on the latest government figures, we estimate 38 of 40 Isle Of Wight schools will face cuts:

As a result of the campaign by parents, trade unions, teachers, heads and support staff to ensure our schools are properly funded, the Government has found £1.3bn over the next two years from other parts of the Department for Education’s budget.

This, while important, is nowhere near enough to reverse the £2.8bn in cuts that schools have suffered since 2015.

Head over to the School Cuts Website, put in your postcode and see exactly how badly schools in your area will be affected.

“The bottom line is that the Government has still not found enough funding for schools. The cuts schools are already having to make are only going to get worse, with most schools being faced with cutting subjects, increasing class sizes, cutting staffing, reducing the support for vulnerable children and providing a less rounded education for pupils.

“What is more, parents know that behind every teacher is a whole team helping schools run smoothly, allowing teaching staff to concentrate on teaching.

“These cuts are almost certain to include some support staff. When support staff are cut, their tasks are either not completed or they fall to teachers. Pupils are undoubtedly the losers.”

The stats
Full details of changes to funding per pupil and per school can be found in the table below. Readers can sort the table by clicking on the arrows at the top of each column.

But surely we had assurances recently from the latest Tory carpetbagger to ‘represent’us at Westminster that all was going to be well with school funding ?

There is no new money. It’s all previously announced money taken from the existing education budget. It’s a bit like re-arranging the deck chairs on the Titanic.

Vote Up00Vote Down
Colin
Is it any wonder that the UK has a shortage of well trained skilled workers when the basics in the education of tomorrows workers are underfunded and mis-managed? The education system in the country is fragmented with a mixture of Local Authority controlled schools, Faith schools, Academies, Free schools and others, each of which have their own management teams and agendas. Parties of all flavours have contributed… Read more »
Vote Up00Vote Down
electrickery
Intriguing that the Studio School is receiving so much support. Now why would that be? Geoff: I doubt whether Cap’n Bob has any more influence or information now than he had when he made that rash promise. Still, we know other prominent Tories who have made education commitments that turned out to be so much hot air, don’t we? And I still can’t see how it’s costing… Read more »
Vote Up00Vote Down
Colin

The bulk of that goes to Southern Vectis. The council have a multi million pound contract which we are over half way through.

If I were spending that much money down the drain, I’d have kept very quiet about it. That’s why I keep bringing it up…

Vote Up00Vote Down
electrickery
@Colin I assumed it was all going to SV. This, together with other Concessionary Travel (paid to SV) accounts for more than the entire £7M pa IWC budget shortfall. IWC claimed to have gone to national tender in 2012. In other words, they got to choose between Go-Ahead, Arriva, First Group and Stagecoach, a cartel arranged by the de-regulation/privatisation of bus services by … now who was… Read more »
Vote Up00Vote Down
stevenage104
As much as I detest this government’s squeezing of the Education budget, I very much support the news that the new National Funding Formula is leaving too many schools with less money and Ofsted demanding more. However, I work in 2 of these schools and your figures for those are incorrect, possibly because of pupil numbers being out of date. If we are to fight this government… Read more »
Vote Up00Vote Down