There’s a lot of discomfort about the PRS looking to charge self-catering businesses.

We’re always keeping a close eye on what is happening with digital media and the fate of the music world is something we’ve kept close tabs on. 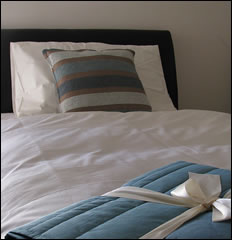 Shop keepers on the Island and around the UK, will be well aware of the Performing Rights Society (PRS) getting in touch with them, asking for money if they listen to the radio or play music within their shops.

It appears that another source of income has been identified by the PRS – self-catering holiday businesses.

The PRS argue that any holiday accommodation that has a radio, TV or CD player in it should pay the PRS for a music licence.

As you might imagine, this hasn’t been well received.

Concern about PRS tactics
The quote from Kevin Smith, CEO of the Chamber, “We would, of course, always advise our members to comply with the law, but in an increasing number of cases, we are concerned about the fairness of the law, the tactics being used by the PRS, and the apparent lack of communication, which means that very often the first businesses know about their liability is when they get a demand for payment.”

We had a good look around the charges page on PRS site, including searching for ‘self catering’ and we couldn’t find a single thing on the site about charges – backing up what Kevin Smith had said.

Island PRS meeting
We read in April’s Island Business magazine that the the Isle of Wight Chamber of Commerce has arranged for the PRS to come to the Island and explain how it’s going to work.

If you’re interested, it’s going to be at Joe’s Bar in Newport on 18 May.

newest oldest most voted
Helen C
I can’t find anything on PRS website either. Having a daughter at Platform 1 I do think the PRS is a ‘good call’ on the whole….. but will I have to pay for guests listening to their Ipod on a dock that we provide … or CDs that we have bought to go into our properties? I should CoCo. I will be going to Joe’s. Thanks VB… Read more »
Vote Up00Vote Down
Simon Perry

I’m all for artists making money.

My concerns – centrally – how much of the money would small artists get?

Haven’t all of these tracks been paid for already, by the radio station / people who have bought the CDs? How many times is too many for charging for the same thing?

Vote Up00Vote Down
BigEars
It should be noted that if the listener has bought a copy of any music, they have effectively paid the license to the PRS to hear that piece of music regardless of how that music is relayed to them. It would therefore be incumbent on holiday accommodation owners to require their guests to turn off the radio or television every time any music (or for that matter,… Read more »
Vote Up00Vote Down
Cx

Its great to see that the Chamber have arranged an event that will help businesses. Have seen alot of arranged events in the Island Business recently which is a great help to those who can not normally source this information individually.

If anyone would like to attend the PRS event you must book, as spaces are limited, by calling the Chamber offices on 01983 520777.
Thanks
Zoe from IW Chamber of Commerce

Vote Up00Vote Down
Pete
Â£900!!!! Has anyone done the Maths on this? Â£900 x number of Island establishments liable. Â£900 x number of UK establishments liable. This of course excludes revenue from Radio stations, CD purchases, re-issues of re-issues, downloads. One thinks of shops, supermarkets, diy stores, pubs,cafes,the list goes on. How much does the artist get? judging by the groups i like, nothing, or hardly anything much as they are… Read more »
Vote Up00Vote Down
INSIDER
The fat cats, and their entourage, of the music industry have been robbing us blind for decades. Back in the sixties and seventies buying an album was quite a serious outlay. Yet now, thanks to limewire and the pirate bay etc. the tables have turned and the parasites are getting just what they deserve, and getting desperate hence measures such as this…that’s not including the artists themselves… Read more »
Vote Up00Vote Down
James P

What happens if you take your own music on holiday with you? Even my phone has a radio in it!