Whether the call-in will delay work going on behind the scenes to prepare reports due to go to the October Executive for both Undercliff Drive and Totland Seawall is not yet known. We’ve asked and are awaiting a response. 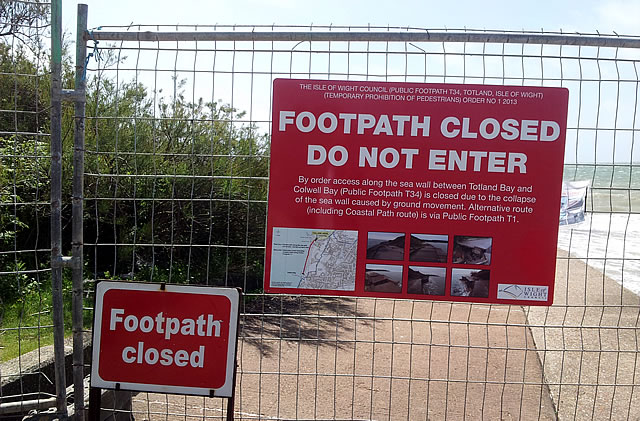 Five cross-party councillors have called-in the decision made at the recent Isle of Wight council Executive meeting to allocate funding for several projects, including Undercliff Drive and Totland Seawall.

The decision on the ‘Capital Programme Contingency Budget – Bids for Resources and Prioritisation of Key Capital Projects’ is the subject of the call-in.

The report presented to members was incomplete as it did not include costings for a number of items which were discounted without reasonable explanation. The Scrutiny Committee did not have the opportunity to review the priorities at the pre-decision stage as the priorities were only decided at the Executive meeting.

The setting aside of the above decision and the deferral of a decision on the Capital Contingency Budget priorities for 2014/15 until projected costs have been obtained on all projects identified in the report on this matter.

Unknown costs for missing items
At the Executive meeting on 9th September, deputy leader, Cllr Steve Stubbings took the opportunity to explain why three items were not being considered for funding that evening. He said,

“There are three items on this list which we can clearly consider as not ready for moving forward on yet. One is the Shanklin Lift because there are conversations taking place with other parties with a view for the potential of that being operated in a different way.

“One is the Shanklin railway cutting/Rush Close landslip where exact sums are not known and there is also a potential dispute in regards to this.

“The third of the items which I would consider falling in that category is Cowes Enterprise College where this Executive continues to await a report from Hampshire colleagues in regard to the exact expenditure still to be allocated to that project.”

“I absolutely disagree with the suggestion which came forward from Scrutiny on this one Chair, there is no question that as an Executive member, given the urgency of these issues and they sheer weight of public opinion around them that I think a deferral from this committee would be appropriate.”

It was also later explained that the three items mentioned above were not being removed from the Forward Plan and would be considered once full costs were forthcoming and any possibility of legal disputes resolved.

The call-in will be discussed at the 2nd October Scrutiny Committee.

Article edit: Removed reference to Scrutiny meeting being held on a Tuesday

2nd October is the usual slot – first Thursday of the month. Scrutiny ‘call in’ will usually delay confirmation of the original Executive decision (if not reversal of it) until the next Executive – 7 October.

My fault – what a twit, I’d read Tuesday not Thursday. I thought it was strange to see it moved from the usual slot. Now corrected.

Vote Up00Vote Down
buckle
It is a shame that the Scrutiny Committee were not quite so active at the outset. The Committee could have requested further examination of the viability of the scheme, questioned whether it represented value for money and questioned whether appropriate consultation with stakeholders, partners or members of the public had taken place prior to acceptance and realisation. Value for money, sustainability, voicing the concerns of members of… Read more »
Vote Up00Vote Down
MamaLu

Vote Up00Vote Down
phil jordan
It might be prudent to consider that extensive public consultation took place for both Totland and the Undercliff. The public meetings were widely reported. However, it might also be worthy of note that included in the decision to allocate Capital funds under the paper that is now being called in are: 1. Beaulieu House boiler replacement [a home for those with learning difficulties who are facing the… Read more »
Vote Up00Vote Down
Geoff Lumley
Phil. I certainly didn’t sign up for this ‘Call In’ to play political games as I have little in common with any of the others politically. You are well aware that there are gaps in the information presented to Executive last month. Scrutiny Committee urged you to defer that decision last month, but we were ignored. ‘Call In’ delays confirmation of a decision by one month. The… Read more »
Vote Up00Vote Down
phil jordan
geoff: That’s not addressing the items I listed above…the call in affects those items and issues. The call in puts at threat the disabled and those with learning difficulties in the establishments I have listed. Also, I’m not sure that I agree there were gaps in the information we had at Executive.. Some people keep asserting that there were/is but it might be helpful to explain just… Read more »
Vote Up00Vote Down
dotdotdot

Well said Mr Jordan. There are real people with real needs waiting on these decisions and the last thing they need is petty delays introduced at the last minute by self serving individuals.

Clrs. Blezzard, Lumley, Whittle, Gauntlett, Nicholson should be ashamed of themselves for politicising a decision which will affect the lives of vulnerable residents. They know that all the capital projects have been fully discussed at every level. They have gone down in my estimation.

Am I correct in thinking that the two main moans are about projects that a certain pair refused to discuss or attend a meeting set up to errr discuss the issues in question????
The more these idiots play their power games, the more I wonder if it is time to let Hampshire take over!

Vote Up00Vote Down
milly
The people would like the road reinstated at the Undercliff. The Council options put forward were inadequate. The options did not include for consideration, a bridge standing above the landslip and fixed to the base level.The £20m should not be accepted as a final quote. Engineers to the Government, Ovey and Partners or socially friendly Jonathan large Associates (consultancy often used in the nuclear industry and other… Read more »
Vote Up00Vote Down
tryme
If Phil Jordan doesn’t know where the alleged gaps in information are, then really, what is going on? His description of Chris Whitehouse congratulating Bob Blezzard after Scrutiny, makes my heart sink. The destabilisation process seems in full swing, and I wonder if some got caught up in it without understanding how they are being used. Now this is all evident, I fervently hope the Indie group… Read more »
Vote Up00Vote Down
Victor Meldrew
There has been so much discussion around council spending prioritites I dis some research to try and discover WHAT the local authority was legally obliged to do in an attempt to put into context where and what cuts could be made. Amazingly I found out that up until 2011 neither local OR central government knew! As a result DCLG carried out a review and published a list… Read more »
Vote Up00Vote Down