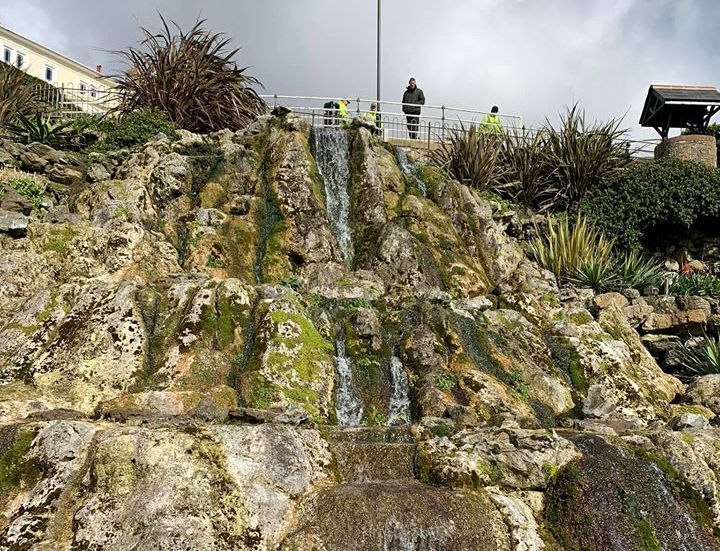 Thanks to the investigative work of Ventnor councillor, James Toogood and Stan Hayden (from John O’Conner Grounds Maintenance), water is once again flowing down Ventnor’s cascade.

Where has the water gone?
Residents raised concerns last week when the flow of water became restricted and eventually stopped on the iconic Ventnor cascade.

Jim and Steph Toogood set about trying to work out what had happened amid fears from residents about where the water might be diverting to.

Natural spring
The water that flows down the cascade comes from natural springs and some flows into the paddling pool (in the warmer months) whilst the rest feeds into the harbour.

Blockage at top of cascade
This lunchtime (Thursday) Steph Toogood reported that a blockage in one of the inspection chambers at the top of the cascade was causing the problem.

It’s believed the water was backing up into some of the culverts in the unused basement of No 13 Pier Street.

Well done to all involved for solving the mystery and getting the water flowing again.

And what does the owner of 13 Pier Street say?

Vote Up150Vote Down
Benny C
Nice one. Councillors getting involved, fixing things and getting well deserved good press. Small but very meaningful. Meanwhile in Niton , the local Councillor wants to spend millions of pounds on a wobbly bridge to help prop up a few poorly run businesses he says he has connections with. Nice one. We could use that money to prop up essential services which have been deteriorating under the… Read more »
Vote Up20-10Vote Down
steephilljack

Steph Toogood is the wife of Cllr. Jim Toogood !

I answer to ‘Bones’ question I don’t think Steph Toogood is a Ventnor Town Councillor, but she’s very good at telling Jim what to do.

Priceless, that’s made my day! Thank you.

Who is Steph Toogood ?

Oh ! Is she also on the Council?

Not as far as I am aware, but she’s a concerned resident so helped with communications on Facebook