This Is Asa: Hear His Story

You may’ve heard of him, you may’ve met him, you may’ve read about him in the national press or you may’ve seen him on TV …
If any of the above apply, you will no doubt be in agreement that 14 year old Asa Singletonn … 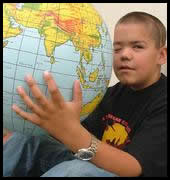 If any of the above apply, you will no doubt be in agreement that 14 year old Asa Singletonn from Ryde is an amazing kid, who we could all learn so much from.

You’ve been told by Doctors that you could lose your sight before the year is out…. No amount of surgery or money can stop this from happening…

You are very quickly going blind.

What would YOU do?

I can’t imagine how I would deal with that kind of news at my age, let alone as a child. Asa and his family made the decision that he would get to see as much of the world as possible before he lost his sight completely.

Along with help of some very special people, Asa made a documentary to highlight the tragic genetic disease, Neurofibromatosis 2 (NF2) that he was born with. This disease affects 1 in 40,000 people and is as yet incurable and potentially life-threatening.

The story of his life so far and what he had to endure is heart breaking, but despite this, Asa “goes out there himself and does the best he can. This is the inspiration people see when they meet him and what makes people he has never met want to help him. He is truly an amazing boy.”

You can watch a trailer of the film over on his MySpace, and we’ve just heard that as the film is now completed it will be broadcast at several events in the near future. We’ll let you know as soon as we hear dates and places.

In the meantime, take a look at the official website for more information and to make a donation.

Spread the word and spread the love.

5 Comments on "This Is Asa: Hear His Story"

My heart goes out to Asa’s family today …
Many Blessings