People Power strikes! Two fingers to the council as Islanders build their own new road on Undercliff Drive

Residents of Undercliff Road are sick of Isle of Wight council and Island Roads having done nothing solid over the last eight months to re-provide vehicle access to their homes. Knowing this, a group of Islanders have got together and built a road themselves, as a big ‘Up Yours!’ 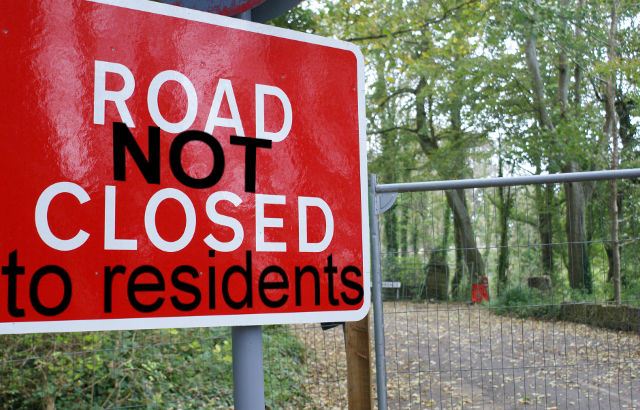 Residents in the nine landlocked properties on Undercliff Drive, are singing three cheers after a stretch of road, which has been closed to vehicles for the last eight months, has been rebuilt by Islanders.

He explained the new road appeared at the weekend and now enables residents vehicular access right up to their properties (apart from Woodlands and Fleet House which are stuck between the Eastern barriers).

All the council has done in the last eight months seems to be writing reports and holding meeting. In September they finally agreed to spend £500,000 on building a new road from the West and a cycle path through-route, but no work had started.

OnTheWight understands that deliveries have already been made to the previously-landlocked properties with a 17 tonne lorry using the road without problem.

Nettles and overgrowth had been left unattended by the authority blocking the stretch of road residents had to walk along. These have now been cut back and leaves along the stretch where properties sit, cleared by residents.

The new stretch of road is now wider than previously and provides a passing-point should residents approach from opposite directions at the same time.

Residents: “Not prepared anymore to just sit back”
Gary, whose business has been completely devastated this year due to being landlocked with only pedestrian access, was kind enough to spare some time for us today to explain what’d happened over the last week.

“We’re not prepared anymore to just sit back, the council have been so lax.”

Now the road has been rebuilt, residents can drive their cars right up to their properties, receive deliveries of winter fuel (oil, gas and wood) and be safe in the knowledge the ambulance and fire service now have vehicular access.

“There’s been a lot of help from the Island.”

Timing of winter repairs
On the amount of the time that’s passed since the landslip occurred at the beginning of the year, Gary said,

“They’ve [the council and Island Roads] had all the dry weather and now they’re going to do the same mistake as last time, start the repairs in the winter.”

Podcast
Listen to our chat with Gary by clicking on the play button below.

People Power opens road: Video
Given it’s been eight months since the Council closed the road cutting access to Undercliff Drive, it was with no small excitement that we drove along the newly-opened road this morning.

To mark the occasion, it only felt right to video the journey, to share it with the Island.

29 Comments on "People Power strikes! Two fingers to the council as Islanders build their own new road on Undercliff Drive"

Congratulations, Gary and whoever else helped! Looks really good. Are you sending your £500,000 invoice to the IWC?

Brilliant news! Well done to everyone involved. And well done Simon and Sal for being first to break such an excellent story.

This is what should have been done right at the start to maintain access – instead all we got was ‘monitoring the situation’, ie doing nothing (except erect the barriers to keep people out).

Congratulations to those concerned.

The people have kept the initiative in their own hands, got together and solved one of the problems. They haven’t relied on Island Roads or the Politicians at Council level or the MP, Andrew Turner, to solve the problem.

This is the way forward and the ordinary people support and congratulate you.

Who are you calling ‘ordinary’, Milly!

You often write as though you are speaking on behalf of all of us, ‘ the people’. As though you command and speak for a monolithic political movement, (shudders)

I find that creepy.

Vote Up00Vote Down
Don Smith
Well done and the cost of this work should be paid for by IR – Do it yourself! I wish I could lower a roadside kerb in my close myself, this would allow me uninterrupted access to Newport on my mobility scooter. Eighteen months since I first applied to the IoW council and IR for this kerb to be lowered; although I am informed by Councillor Lumley… Read more »
Vote Up00Vote Down
Patrick Mckay

Perhaps the council should offer Gary a post as the ” Can- Do ” Officer for the Isle of Wight?

Vote Up00Vote Down
dennisthegrockle
Yes, it’s that overnor again! So very delighted to read this and I just wonder why “people power” can make this mighty move when the council just seem to dilly dally. We visit the Undercliff because we love that fabulous area – we know for you folk it is so much more of course, your home and business and we really do feel for you all. We… Read more »
Vote Up00Vote Down
Frustrated99

Cut and paste the Utube link, at the bottom of the story, into your web browser.

Vote Up00Vote Down
Steve Goodman
Nice one; big respect from this old guerrilla gardener & PFI road contract sceptic, still waiting for the urgent work overdue by several years at the Frank James site. (Last day today for comments on the new planning application there – http://www.iwight.com/planning/AppDetails3.aspx?frmId=28771). Still paying our taxes, still keeping our side of the bargain, still being let down by the people in power, still angrily certain that the… Read more »
Vote Up00Vote Down
peaceful_life

Much kudos to all involved in their concerted effort and achievement.

Just to add, I sincerely hope the coming rains don’t wash it all away, but most of all…stay safe folks.

Vote Up00Vote Down
tryme
I’m kinda glad the Council writes a few reports and holds a few meetings before spending half a mill of our money! Perhaps they overestimated by 100% or perhaps the road they have in mind will be even more useful for residents and other people too. It’s always great to see people not feeling dependent on the Council, but tackling things themselves. The Council, of course, is… Read more »
Vote Up00Vote Down
Tom Spragg

I kinda wish the Council had “written a few reports and held a few meetings before handing over half a mill of our money” to Pihl, a company that had already been declared bankrupt

See you over on that topic to counter that one, Tom! If you want to back up your comment, that is: unless you just wanted to make a piggyback soundbite and not follow it up at all. Mistakes will always be made with technology and in that case appears recoverable.

Vote Up00Vote Down
tryme
Certainly the previous administration’s decision to spend many millions on CEC was a disaster. But it’s a false point and inflammatory to infer that because a mistake was made recently with payment of a half mill to Pihl,(which is expected to be recovered), that the money must therefore have been seen as “mere petty cash”. It was an accident that the payment was made. Not a decision… Read more »
Vote Up00Vote Down
Stephen

We do not know whether the Administrator for Pihl Ltd ‘advised’ IWC that there was a legal obligation to pay.

Perhaps this was a stage payment for work actually done and ‘signed off’ thus requiring payment.

The sole task of the Administrators, apart from covering their fees, is to maximize income for the creditors.

I kinda wish the council would stop sitting on their hands and get a move on. They have managed to get to winter again without doing anything. Are they hoping the rain will make the decisions they are avoiding ?

Vote Up00Vote Down
Billy Builder
Whilst I congratulate the residence for taking initiative here in providing access to these properties, this should not be regarded as a long term solution. The underlying conditions that lead to the collapse last winter still exist. The land on which the road and houses are built is still unstable and liable to slip further. It is very unlikely that insurance companies will offer any affordable cover… Read more »
Vote Up00Vote Down
Philip Hawkins

Just to point out that the houses to the north of the road are untouched, just cut off (or were).
The slippages occured either side, where the roadworks were.

Vote Up00Vote Down
Billy Builder
Some of the houses to the north of the road have clearly moved, with new cracks evident. I believe that the council have installed tell-tails to monitor this cracking on a number of properties. The trouble with land slips is that they are progressive, in that when an area of land slips it destabilises the land above the slip. Therefore, since the slip occurred along the road… Read more »
Vote Up00Vote Down
buckle
I agree 100% with Billy Builder. The underlying cause of instability remains without drainage. The temporary road buys a bit of time but it doesn’t solve the problem. It was clearly a desperate act after 8 months of sheer frustration. The question is, what happens now; who is responsible for the upkeep and maintenance of the road? I can’t see that Island Roads or the Council will… Read more »
Vote Up00Vote Down
Man in Black
I don’t think that whoever rebuilt the road sees it as a long term solution. Someone just wants them to be able to have proper access to their homes, as they should’ve done eight months ago. It’s an absolute disgrace the council have left things as they are for so long. These people have been in a living hell for most of this year. They need fuel… Read more »
Vote Up00Vote Down
The Sciolist

Oh dear, I hear the council are unhappy with this private enterprise and propose stopping access.

If they do, they will be making a big mistake. They did nothing, the residents have acted in desperation. The council cannot prevent people going to or from their own homes, nor should they. It’s telling that the usual councillor’s are absent from the comments here?

Could the IWC “unadopt” that part of the Undercliff Road and thus wash their hands of the whole problem? Sneaky!

Vote Up00Vote Down
Ian Ridley
Congratulations to Gary Smedmore and helpers !!! – I have just listened to his interview and watched the video of his first drive on the new road to his business the Caravan park and now giving the other properties cut off, a life line to reside in their homes for this winter. You have done in a few weeks what IOW Council could not, did not and… Read more »
Vote Up00Vote Down
Mike Connor

I have just heard that Iisland Roads presumably on instructions from the council are to close the road and erect barriers. I am 72 non political but feel that people who want to decide action that is right for them and accept the resposibilility for their actions should be allowed.They have been failed by their elected representatives .Can anything be done to support island people?