UFOs On The Isle Of Wight

Many thanks to Rich Cattle for sharing his experiences of investigating UFO sightings on the Wight.

It’s written in response to the recent media coverage of UFO sightings and makes for a very interesting read. Rich clearly has a great deal of knowledge in this area. Ed 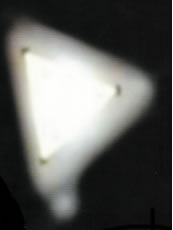 It was a large ball of white light that pulsated in and out but made no sound at all.

It appeared on the horizon north of me as I reached the top of Hunnyhill in Newport. At first I thought it was a planet still visible in the morning light, but soon dismissed this thought as the object drew nearer. It passed over the island from northwest to southeast at a high altitude. When I returned home which was only 10 minutes walk away, I recorded what I’d seen immediately.

Thinking I would see a rational explanation for my sighting I kept an eye on local media. Instead of an explanation the local paper that came out a few days later had an article about the sighting asking for more witnesses to come forward. I felt obliged and in doing so discovered that two other people I had never met had seen the same object on the same morning, one in Ryde and one in Shanklin.

Both were just as bewildered as I was and had no explanation as to what we saw. At the time I was studying media at the local college and used these skills to start documenting the UFO phenomena on the Isle Of Wight as best I could and have been doing so ever since.

Ten years down the line I think I have managed to sort out genuine witnesses of UFOs from miss observed known aircraft, hoaxers, attention seekers, and the mentally ill.

It hasn’t been easy, many things I’ve investigated have turned out to be normal air traffic in this area and there are plenty of cranks out there ready to mislead genuine seekers of the truth. In many cases police have been called to investigate claims from frightened witnesses. In these cases you can usually rule out hoaxers. You see, hoaxers are likely to tell me or other journalists nonsense, but in my experience they won’t involve the police, as if found out, they could risk prosecution for wasting police time.

Over the years I’ve had the experience of investigating UFOs and dealing with the sort of people that surround the phenomena at first hand. I always interview witnesses on cases I’m dealing with myself and feel that everyone should do the same when writing about these things, as I’m sure many journalists in the past have not done the same, leading to many well known examples of UFO literature being fake.

There are many physical signs people give off unknowingly when they are lying that journalists are trained to look for. Also I think I have had my fare share of witnesses that are clearly suffering from mental illness and can now tell early on in an interview if this indeed is the case. It is always more newsworthy if you have independent witnesses reporting the same UFO as this is much more harder for people to fake.

Over the years, I have looked at the UFO enigma on the Isle Of Wight as a whole and tried to look for patterns in its behavior.

For some reason, certain areas on the island are more prone to strange objects in the sky than others and also the shapes of UFOs are quite unique to our shores, particularly the kite shaped UFO and white triangle that make a ghostly appearance in our skies now and again.

It seems to depend on where you are standing, that increases your chances of seeing an aerial apparition. Many people see strange things in the skies when they are traveling along particular stretches of road, curiously these are the same roads that yield countless ghost reports. Also we seem to get both ghost sightings and UFO reports at the same time, we seem to get them both in ten year cycles.

Maybe all paranormal activity is somehow connected and that it is a natural phenomena of the island that simply wells up from time to time and unleashes an energy of some kind manifesting itself in strange apparitions on the land and in the sky.

I don’t believe the modern myth that the UFOs seen over the island are secret military craft. This doesn’t make sense because anyone who wanted to spy on our air force’s newest creation could simply come to the Isle of Wight and see them in flight, lets face it when the stealth bomber was top secret twenty five years ago it was not being tested over populated areas for the same reason.

In all my investigations I have found no evidence to prove the existence of extraterrestrials, although I maybe proved wrong one day, when we finally hear from those elusive little Grey men.

14 Comments on "UFOs On The Isle Of Wight"

newest oldest most voted
chris shaw
My god just seen a ufo. I was in my garden south facing in ryde havin a smoke. I was looking over at the point at the top of culver cliffe at a light on top of the hill far left of it around 2:30am. Then i started looking up at the star’s a head of me and then all of a sudden it looked like a… Read more »
Vote Up20Vote Down
musoactivator

Maybe something to do with them marconi first radio waves all those years ago? ;O)

Vote Up10Vote Down
Luigi
I’m very much a skeptic on this subject, but I remember seeing something in October 1996 over Newport. My girlfriend (we had been together for about a month or so) now wife, saw something too – she was up early feeding her baby and mentioned seeing something out of her kitchen window. I was riding my motorcycle back to Freshwater and thinking it was a planet or… Read more »
Vote Up10Vote Down
Paul
My Girlfriend and I were walking along the seafront at Ventnor at approx 10:00 – 10:05pm on Friday 26 September 2008 when my girlfriend pointed out approx 7 to 10 small lights in the sky travelling inland in a diamond formation, most of the lights were interacting with each other but still loosly sataying in the same diamond formation. We only saw them for approx 8-10 seconds… Read more »
Vote Up10Vote Down
caroline
On Thursday 1 January 2009 at 00.20 hours I saw a very bright orangey yellow oval light moving across the sky south of Ventnor, going from east to west. I was in the kitchen in our home in Madeira Road, Ventnor, which has south / sea facing windows. We had already looked out at the New Year fireworks and then a short time after I glimpsed this… Read more »
Vote Up10Vote Down
Sally Perry

We saw them too, we think they were chinese lanterns being released from the hotel.

Vote Up10Vote Down
lulu
Hi everyone im a regular star watcher but been watching the skies more since seeing my first unexplained object in the sky. Its seems 2014 has a lot of activity in our island skies I find more so between 12am and 2am in the mornings. I’ve seen triangular shaped and soooo bright objects moving down from space zig zaggin then shooting up into darkness and then suddenly… Read more »
Vote Up10Vote Down
11910

A UFO sighting was mentioned in the county press last week and on GMTV this morning.

and they were about the isle of wight

cigar shape over brading down 19.45 02/03/2009? anyone know if large blimp, multiple lights in area, returned from Sandown 10 minutes later, object had vanished

Hey Leon, These were lighted for Asa Singleton who would have had his 18th Birthday. They were chinese lanterns released from his home in Pellhurst Rd, Ryde on Saturday night. :O)

The 2nd lantern was for Asa’s sister Dominique whose 21st was the next day.