What does the future hold for the Ventnor Winter Gardens?

OnTheWight digs in to find out what will happen to the Winter Gardens if the owner fails to complete their development by July 2014, as is looking increasingly likely. 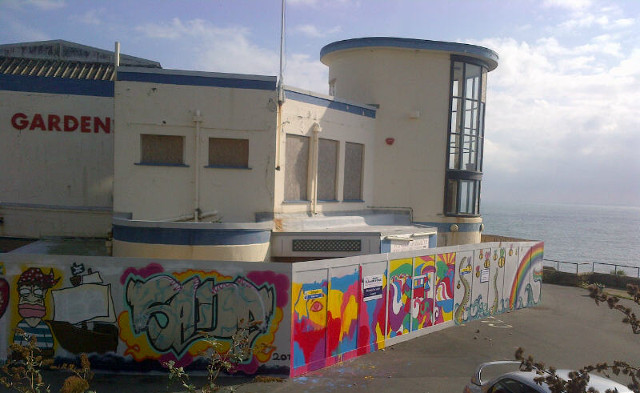 It’s coming up to the three year anniversary of the closure of Ventnor’s iconic venue, the Winter Gardens.

Back in July we ran a detailed analysis of the then-current position with the Ventnor Winter Gardens.

Since then, as you can see from the photo above, boarding has been erected around the building followed by that being painted by locals.

No sign of any work
When the Conservative-led Isle of Wight council made the private decision to sell the building to its current owners, a condition of the sale – summarised here, but explained in detail below – was that its conversion to the hotel had to be completed 18 months from the signing of the contracts. Ink hit the paper in January 2013, so the building has to be completed by July 2014.

However, there has still been no sign of any other works taking place, despite the deadline for completion looming ever closer.

We got in touch with the owner, Kevin Sussmilch, and the council to find out more.

Gilbey: Lack of work is “unacceptable”
We asked whether the council were concerned about the building being left to degrade even further.

“The lack of work undertaken at this prime site in the heart of Ventnor is unacceptable and not what was promised by the developer when it acquired the Winter Gardens from the previous administration.

“It is clear to me that it has broken promises made for the future economic prosperity of the town and I share the frustrations of local residents and businesses at the lack of activity.

“With the July deadline approaching fast, I would hope that we will start to see a start to the promised development of the building in the new year.”

Walk the walk?
Cllr Gilbey’s tone sounds quite encouraging, robust some might say, but will his comments be followed by action?

We started by asking whether penalties would be imposed on the owner should the building not be “substantially completed and open to the public by July 2014”.

No penalties built into the contract
Rather surprisingly we were told,

“There are no penalties applicable to the sale but the council has an option agreement to buy back the property for the greater of £1 or an amount agreed reflecting the investment made by the purchaser.”

As readers may remember, Cllr Stubbings told OnTheWight in July that these fees, which include ground work surveys, were then in excess of £200,000.

Will the council buy it back?
We went on to ask whether the council are considering the option to buy back the property.

“This is a matter for Members to decide as the 18 months deadline is reached.”

Will the deadline be extended?
Finally we asked whether the owner, Kevin Sussmilch, has asked for an extension to the July 2014 completion deadline?

A spokesperson for the council replied, “No” and in answer to our question of whether the council would give any request for an extension a sympathetic hearing, we were told,

“This would be matter for the Cabinet to consider and it would only do so if such a request was received.”

We posed several questions to owner of the Winter Gardens, Kevin Sussmilch, but at time of publishing had not heard back. This isn’t unusual, OnTheWight has never had a direct reply from him. If he does reply, we’ll update you.

25 Comments on "What does the future hold for the Ventnor Winter Gardens?"

The building is now totally wrecked and has gone beyond the point of mere refurbishment. I don’t know whether this is what Sussmilch intended, but he has shown himself to be to much cleverer than the IOW council solicitor who drew up and agreed that Mickey Mouse agreement with him.

I wonder if the idea is that soon, demolishing the WG and building a stunning, or at least a potentially more profitable, modern building, will be the least worst option left for the Council to sanction.

I don’t know that Ventnor is being treated any worse than the rest of the Island. We haven’t heard much about Ryde Theatre recently.

There is no doubt. The project cannot be completed in the time remaining.

The last council were very good.

At announcing these amazing deals.

And then nothing happened.

Sold down the river for a quick headline?

Kevin Sussmilch, the saviour of Ventnor! What a heartless, cynical person he must be. Merry Xmas Kev!

Vote Up00Vote Down
binnel ghost
This is everything I predicted way back in early 2011. I said then and I say it now there is no joy in I told you so. I blame not just the former deranged Isle of Wight council but also all the Ventnor councilors of the period who should have supported the community initiative that was ‘Save the Ventnor Winter Gardens’ group but instead were taken in… Read more »
Vote Up00Vote Down
tryme

Perhaps the only way to make contact with
Kevin S. would be to spray a message on that handy hoarding….

Perhaps a protest at his Hambrough Hotel would get the message through to him.
I see that they have a Boxing Day brunch advertised and there will be a lot of people down that way on Boxing Day to see the swim…..

Vote Up00Vote Down
Bruce Webb
Its a terrible loss for the town from the moment it closed it was still a viable entertainment venue. The Vfringe could have sold it out in the last 3 years and the bids for the building were all viable but for the one that won. I doubt the building is gone in terms of saving it and reopening it, sell it back to the town for… Read more »
Vote Up00Vote Down
richard
I agree with a lot of what has been said above – but – when it was run by the ‘community’ it failed miserably and so we are where we are now. This doesn’t even take into account the millions that need spending on it – I think that was estimated at £12m 3 years ago! I would like nothing more than to see VWG thriving, but… Read more »
Vote Up00Vote Down
Man in Black
I don’t know where you’re getting the £12m figure from, from memory it was about £650,000 that the council stated needed to be spent. Also, the community bid was not the only one on the table, there was another commercial bid that would have kept the venue open and allowed community use. The two businessmen who put forward that bid have gone on to invest large sums… Read more »
Vote Up00Vote Down
Richard

Vote Up00Vote Down
Steve Goodman
Firstly, thanks OTW for keeping an eye on this, & indeed for all you do for us; I hope you are on everybody’s Xmas present list. This sad story has a lot in common with others, here & beyond. We are losing buildings of great architectural, historical, & community importance like Frank James, Ryde theatre, & the hammerhead crane, at a time when we are expected to… Read more »
Vote Up00Vote Down
tryme

The £40-50 billion of HS2 would go (gulp) quite a long way…. I daresay someone has worked out what it would mean if used instead – in a properly thrifty manner, mind – to support services and environments for local communities all over the UK. (If not, Cicero will work it out!)

Vote Up00Vote Down
Chris Bonney
Is there any point in yet again telling binnel ghost’s and the smugly self-righteous I-told-you-so brigade that Ventnor town councillors had absolutely no say in how the Winter Gardens was disposed of. Ventnor councillors at the time were given the option by the Island council to either totally take responsibility for the building, including paying the bill to bring back it up to a standard that was… Read more »
Vote Up00Vote Down
commonsense
I do feel the Ventnor Town Council ought to have supported the local communities views much better than just handing the keys back without a fight. When you look at the lengths the VTC have gone to keep hold of the Coastal Visitors Centre i’m sure a lot more could have been done to fight the local communities corner; Ventnor Winter Gardens being a much more useful… Read more »
Vote Up00Vote Down
Chris Bonney

What do mean ‘without a fight’! As a group we spent many, many hours over a period of weeks going through every possible scenario.
The VTC fought hard for this town and deserves better than your imagining that it just rolled over on its back. For what it’s worth, I personally told the Island councils representative that he was a liar.

The additions to the building were planned as far back in the site as they could be. I suspect that the Banks were worried about the possible stability of the site particularly at the Eastern end when lending money.

Vote Up00Vote Down
binnel ghost
Chris Bonney – smugly self righteous – pot, kettle !!!! Ventnor town councillors did not support the other viable options. They supported the man who [part of comment removed by moderator] This has now become blindingly obvious. No other group could have made a worse mess and yes those of us with a grain of common sense predicted this almost 3 years ago. The community group could… Read more »
Vote Up00Vote Down
tulsevent

Almost all of the present VTC are NEW Councillors and were not involved.

Not quite true. There were two members of the then Ventnor Town Council on the interviewing panel that gave the building to Kevin S (and the Town Clerk was there to advise), and those councillors are part of the present council.

Vote Up00Vote Down
steve s
VTC made the decisions they made based on the information that was available to them, just as the current members do. I was on the panel that UNANIMOUSLY declared the Hambrough Group bid the strongest of the three, because it was. I take full responsibility for my part in that decision. I suspect that none of the panel members contemplated the possibility that we’d be where we… Read more »
Vote Up00Vote Down
steephilljack

Well said Steve. The County Council’s contract should have had a penalty clause to prevent this happening, but the important thing now is to get things moving.
I would be very annoyed if any council, town or county, had to refund Mr. Sussmilch’s expenditure on the building, apart from the £1.