Watch out for influx of brown-tail moth caterpillars

Watch out for the annual influx of Brown-tail moth caterpillars in Ventnor – they might look soft and fluffy, but the hairs can cause skin irritation and breathing difficulties. 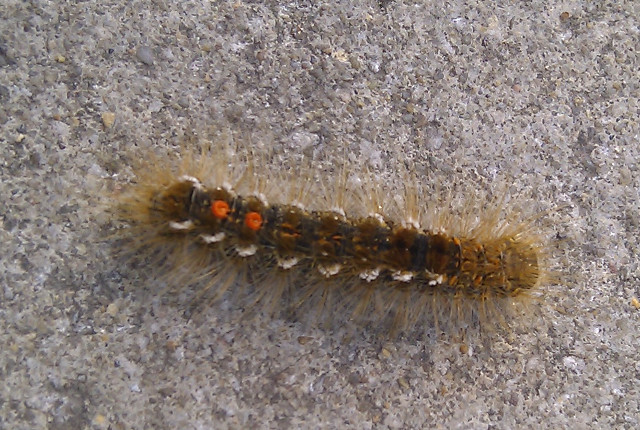 There have been many sightings of brown-tail moth caterpillars in Ventnor this week – particularly by the paddling pool on the esplanade.

The influx of caterpillars – which can cause irritation to skin – have been reported to the Isle of Wight council, but it’s worth taking care if you see any.

The hairs of the caterpillars, which look lovely and fluffy, can break off as barbs, causing skin irritation and breathing difficulties.

What to do
When the same happened almost to the week last year, the Isle of Wight council said,

“Normally this will give a few hours of localised discomfort. Washing the affected area with water and the application of calamine lotion on the skin may ease the itching. The hairs may also worsen symptoms of asthma for some people.

“You should seek medical advice from your pharmacist or GP if symptoms do not settle down within a few hours.”

They gradually move further away from their winter tents during May until they become solitary. The creatures spin a cocoon and pupate, with adult moths emerging in July/August, ready to mate.

Females lay eggs near the tip of shrub branches and then they spin a tent at the end of the shoots in readiness for winter.

FACT FILE
Although the caterpillars prefer hawthorn and blackberry, they will eat leaves from any type of bush.

The creatures are between 7mm and 38mm in length (depending on age), dark brown in colour with a distinctive white line down each side; with the whole body covered in tufts of brown hairs and two distinct orange/red dots are noticeable on the caterpillars back towards the tail.

The insects have spiked and barbed hairs, which can penetrate skin, causing an irritant reaction.

Thanks to OnTheWight reader Eileen Harnley for the heads-up

Image: morningcoffee under CC BY 2.0

The local council have promised that they won’t be using pesticide on these generally harmless caterpillars this year. Let’s hope they are left well alone. Maybe a few signs posted to make people aware of the small chance of issues would suffice.