Isle of Wight business Wyatt and Jack were live on The One Show last night, flying the flag for the Island and sustainable living. 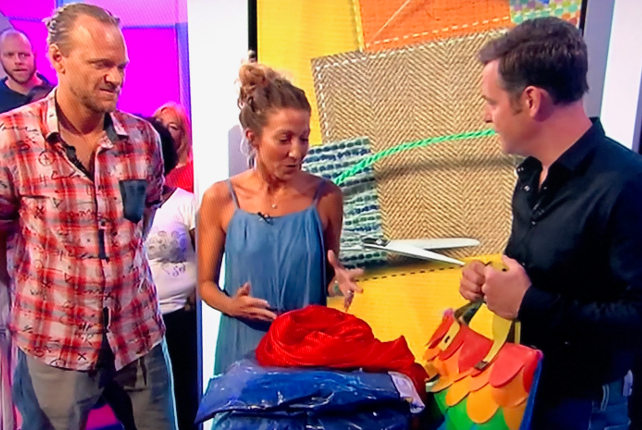 Wyatt and Jack – the Isle of Wight-based company that creates sustainable bags and accessories from unwanted materials such as former deck chairs, bouncy castles and inflatables – had another national boost this week.

As well as being featured on the BBC’s main UK news site earlier this week in a feature titled, ‘Plastic waste: What to do with your inflatable when it goes pop’, last night (Thursday) Georgia and Steve Lovell appeared live on BBC1’s The One Show.

Great boost for the business
Presenters Matt Baker and Emma Willis were joined on the sofa by Orlando Bloom and Cara Delevingne and 15 minutes into the programme, Wyatt and Jack is featured, with Georgia explaining what their business is all about.

After hearing about how Wyatt and Jack help tonnes of plastic swerve landfill, Matt Baker goes on to explain that his brother-in-law was on the Island recently and bought Matt’s daughter a Wyatt & Jack bag for her birthday.

Watch again
If you have a TV licence you can watch via the BBC iPlayer for the next 29 days. Georgia and Steve appear 15 minutes into the programme.

They follow by a very good segment about a woman who collects unwanted tents from festivals and turns them into raincoats. Such a great idea!