Eight-year-old Martha from Niton is featured with three photos in the first issue of new female skateboarding zine, Plank. She continues to be an inspiration to many. 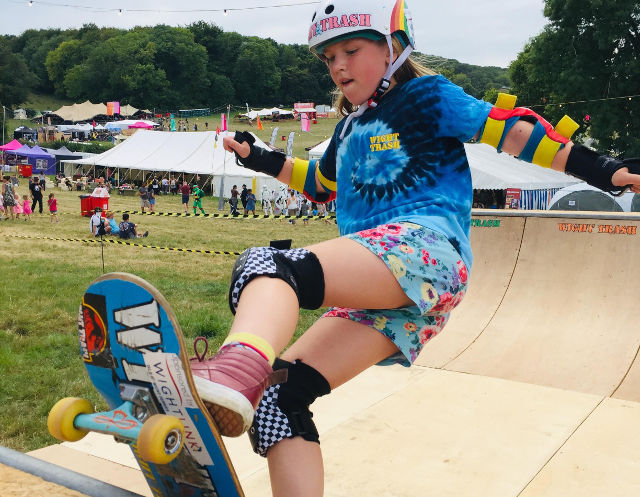 Women and girls have been involved in skateboarding for decades, but it’s not uncommon for skate mags to only offer the occasional feature on female skateboarders. That makes it even more fantastic to see an entire printed zine dedicated to female skateboarders of all ages.

The zine, produced by Laura Harris, has included three great shots of eight-year-old Martha, including one as a double page spread. Read more about Plank below.

Sky will need to pass qualifying stages first, but watching videos of her in action, you can see where Martha may get her motivation from.

Who knows, perhaps in a few years Martha could be representing GB at future Olympics.

Martha is the first skateboarder to be included in the Isle of Wight council’s Talented Athlete Scheme, and has received fantastic support from Wightlink.

Injury repairing well
Back in April OnTheWight reported that Martha had broken her leg in five places whilst at a skatepark on the mainland. After sticking to the prescribed rest, it wasn’t long before she was strong enough to get back on the board and has ever since been building up to being able to perform the even more tricks than before.

Her mum, Heather, reports that Martha’s leg is getting stronger and actually because of all the extra training she’s been doing, both legs are stronger than ever.

She’ll be back at Southampton General Hospital in November, when she’ll be put on the list to have the steel rod removed from her bone.

Check out this short video of recent action.

You can stay up to date with Martha’s progress by following her on Instagram, where she regularly posts photos and videos.

“I have been on and off some kind of board for over ten years and always tried to be an active member of skate communities in the cities I’ve lived in.

“When I decided to put Plank together, it was to shine a light on the amazing scene that has emerged from more and more women and girls getting involved. More so over the last five or so years, and with a big help from platforms like Girl Skate UK.

“I wanted a space for anyone to be showcased. From first timers to pros; everyone has a space here. I either wanted people to be inspired to start, inspired to keep going, or inspired to go all out and take over the world.”

“The level of support everyone is amazing, and it genuinely excites me to see young girls like Martha absolutely shine on a skateboard.

“The future of skateboarding as a sport is very exciting right now, and I’m so happy I could produce something that has had such a huge level of support behind it, and that has involved skaters from all over the country.

“The magazine itself has been bought by people from every corner of the country, and has even reached skateboard legend Cindy Whitehead who lives in California. Just incredible, and I feel honoured and humbled to be a small piece of everything that is happening.”

For more on Plank Zine head to Facebook where we’ll be keeping an eye out for news of the second issue.