Despite the atrocious weather over 100 Islanders turned out for the Unite the Isle of Wight’s anti-austerity rally on Saturday to oppose the Government’s austerity programme. 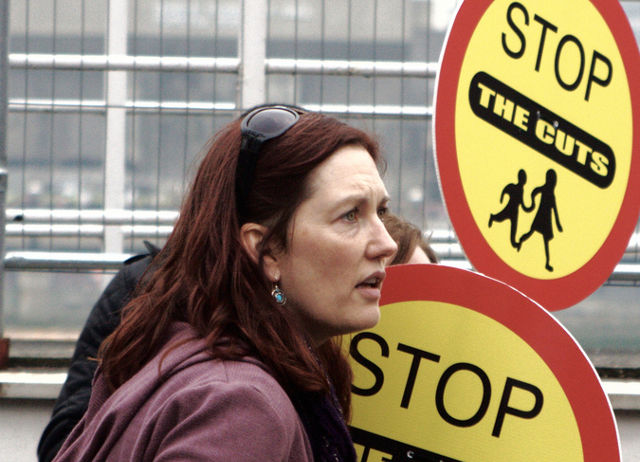 Thanks to Kay from Unite the Isle of Wight for this latest news. Ed

Despite atrocious weather conditions, Unite the Isle of Wight – Politics of Hope organisers were delighted with their third anti-austerity rally on Saturday, in protest at the government’s latest Comprehensive Spending Review.

As supporters gathered in St Thomas’s Square, Newport, heavy rain fell from the skies right on start time and the rally re-located to the nearby Unitarian Meeting House.

Over 100 turn out for rally
There, more than 100 people listened to speeches and re-asserted their determination to contest austerity as it affects the Isle of Wight.

Amongst the speakers were Independent IW councillors Phil Jordan and Luisa Hillard, Labour IW councillor Geoff Lumley, both the Green and Labour candidates at the last general election Vix Lowthion and Stewart Blackmore, Cowes town councillor Vanessa Slade and Mark Chiverton of Unison, together with several others who also wanted their voices to be heard.

“Considering the weather we are delighted with our latest event. All present understood that the spending review last week may have seemed to soften the blow to islanders with the major u-turn on tax credit cuts, thanks to people power here and nationwide. But we also understand those cuts will come through different avenues, for example with the introduction of Universal Credit, and over a longer period of time.

“We remain 100% committed to our campaign, vigilant that cuts will be made ‘through the backdoor’ and united that austerity and numerous other Conservative policies, will not move this Island and country forward.

“Speakers on the day also talked with great passion and knowledge on other topics such as the impact current policies are having on our young people’s futures (job prospects, home-ownership, student debt etc), TTIP, the situation in Syria, climate change and many other issues that we know people on the Isle of Wight feel so under- represented and concerned about.”

Looking forward
Unite the Isle of Wight will now look at how it will approach and respond to what is feared will be a brutal round of government-forced public service cutbacks by the Isle of Wight Council in February next year.

The next group meeting will be on Tuesday 2nd February 2016 at Downside Learning and Community Centre 7-9pm, with another rally planned soon after.

In the meantime, the group invite as many Islanders as possible to get involved in this campaign.

Please find us on Facebook or email: [email protected]

Image: Ajehals under CC BY 2.0

By Unite the Isle of Wight

It was the biggest rally by far yet! The movement is certainly growing.

In fact we all hate austerity so much we turned out in droves to vote for Labour at the last election……..

Vote Up00Vote Down
Luisa Hillard
Dear tiki, this is not a Labour group – I’m an Independent – rather it brings together those of all political persuasions who believe that austerity measures are too extreme and that the repeated cuts to council funding is affecting the poorest and most vulnerable. And yes, 100 people is a small number out of 140,000 residents but as we all know there is a silent majority… Read more »
Vote Up00Vote Down
Geoff Lumley

Well said, Luisa. A group for people of all political persuasions and none, with IW Independent councillors joining Labour and Green members/supporters. The organisers invited every Tory Councillor, but didn’t even get the courtesy of a reply from any of them.

People who are prepared to stand up for fairness and democracy, rather than making snide comments under the cover of anonymity. Many of which in this persons case are falsehoods.

Wrong again.It was Liam Byrne who wrote the ironic note ! You really must check your facts, tiki…..

Does it really matter which idiot wrote it?

The facts are any right minded individual wasn’t going to vote for your shower at the election.

Jeremy Corbyn is the gift that keeps on giving. He must stay as your leader. Comedy gold.

Just making sure you’re awake. So come on then, why didn’t the masses all vote Labour? It’s all very well rattling your sabre for the greater good ….. I draw comfort from the fact that with Conrad Corbyn at the helm you’ll spend 10+ years in the wilderness.

It has something to do with the bloke who went behind his own shadow cabinet’s back, by eMail, to urge Labour MPs to vote against Syria air strikes while they were still debating it.

Vote Up00Vote Down
Mark Francis
The money all went bailing out banks after the meltdown that began in the USA. If this had not happened the whole economy would have gone down the toilet. Yet all through the global economic crisis the rich have got richer & the burden of the sacrifice has fallen upon the poorest. And the bankers still get bonuses. George Osborne is no doubt quoting the words of… Read more »
Vote Up00Vote Down