After spending nine months in talks with Port Talbot council, art dealer John Brandler says he’s given up setting up a Museum of Street Art there and is looking to the Isle of Wight 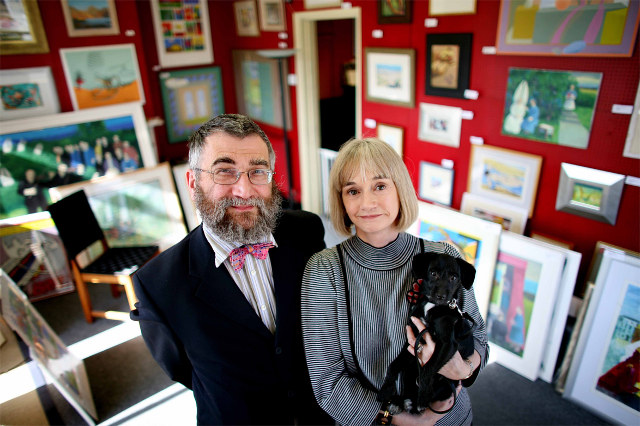 An art dealer from Essex who owns the Season’s Greetings artwork by Banksy, along with work by many other international artists, is looking for willing partners to set up a Museum of Street Art on the Isle of Wight.

Season’s Greetings – painted on the side of a garage in Port Talbot, Wales – attracted international attention last year. The work, which was bought for a six-figure sum and then loaned to the town, depicts a boy seemingly catching snow on his tongue, which is in fact, ash from a bonfire behind him.

Going nowhere in Port Talbot
John Brandler of Brandler Galleries – who is a fond visitor to the Isle of Wight – intended to set up an international-level Museum of Street Art in Port Talbot, featuring work by Banksy, Kaws, Pure Evil, Connor Brothers, Damien Hirst, My Dog Sighs and many more renowned artists.

However, he told OnTheWight that after nine months of talks with Neath Port Talbot council leading nowhere, he’s now looking for interest from another location. He predicts the Museum would attract over 150,000 visitors a year, with increased trade for nearby cafes, bars, restaurants and accommodation providers.

The difference between tagging and graffiti
John’s plans for the Museum extend further than work on display, he said,

“Want to educate people about the difference between scrawling your initials on a wall (tagging) and true graffiti which conveys a message.

A movement for the 21st Century
Clearly passionate about the art of graffiti, John added,

“It’s the movement for the 21st Century, with five Museums globally already dedicated to it. The one in Amsterdam gets over 500,000 visitors a year.”

As an alternative option in the event of any future proposals for residential development of the Columbine building, they were seeking expressions of interest from the likes of the V&A for the building to become a Centre of Excellence in Science, Technology, Innovation by bringing an arts and cultural experience to East Cowes.

Secured for marine jobs
The Isle of Wight council last month had their offer for Venture Quays – which includes the Columbine building – accepted by Homes England. They say the main objective of the purchase was to secure marien jobs at the site.

Get in touch
John Brandler told OnTheWight he’s interested in hearing from anyone who would like to talk further about the possibility of setting up a Museum of International Street Art on the Island.

How about one of the large, empty buildings in Ryde – the Town Hall or Royal York Hotel, perhaps?

Vote Up10-3Vote Down
Benny C
ive seen a couple of these, both absolutely awesome. They’re in capital cities or major regional conurbations because the only way to survive financially is to make the visitor journey super simple in terms of time, effort and cost. millions of residents plus hundreds of thousands of tourist visits annually is a sensible starting point. Philadelphia is known as a spiritual home but the Greeks and Romans… Read more »
Vote Up10-4Vote Down