Free screenings: The Ecoisland vision – how it fell apart and ultimately ended in tragedy

There are several free screenings across the Isle of Wight of David George’s documentary about the Eco Island vision and how it ultimately ended in tragedy. 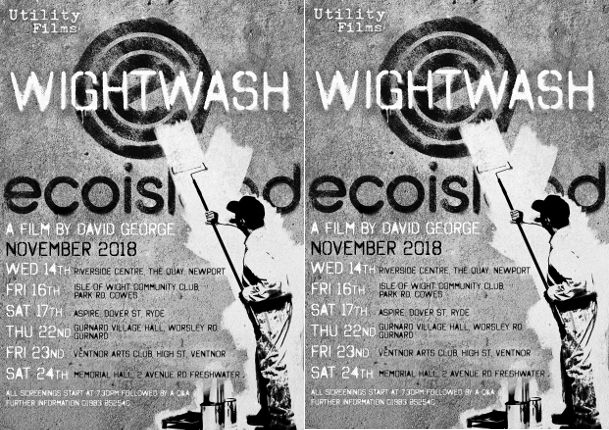 The next two weeks bring another chance to see screenings of the ‘Wightwash: Eco Island’ film by Isle of Wight film maker, David George.

In 2007​ the Isle of Wight Council laid out its Eco Island vision.

“We want the Isle of Wight to become a world renowned Eco-Island, with a thriving economy and a real sense of pride, where residents and visitors enjoy healthy lives, feel safe and are treated with respect.”

Tragic end
Eleven years later this documentary looks at what happened to that vision, how it fell apart and ultimately ended in tragedy with the suicide of Ecoisland Founder, David Green.

Both the Isle of Wight council and the County Press came in for criticism at his Inquest.

Free screenings
There are a variety of free screenings around the Island over the next two weeks, apart from Ventnor Arts Club where entry is £6 for non members.

See our listings at Events OnTheWight for more detail.

All screenings start at 7.30pm followed by a Q&A.

8 Comments on "Free screenings: The Ecoisland vision – how it fell apart and ultimately ended in tragedy"

I will definitely get to one of the viewings – I still think this could and should be one of the main drivers for the island. Some people have carried the ideas forward, but this should be part of almost any strategic thinking with organisations here.

Vote Up30-1Vote Down
Steve Goodman
Sad to see that one very relevant organization mainly still thinks that this need not concern them. Weeks ago David George wrote to all forty IWC councillors, offering them a private screening at County Hall of his film (which of course concerns the council, and which includes contributions from past and present councillors), followed by a private Q&A opportunity. Ten replied saying they would like to see… Read more »
Vote Up15-3Vote Down
Steve Goodman
This film was made because we are in extremely serious trouble environmentally, because our council and other leaders with the power to act to help us all continue to fail to respond with much more than greenwash, because the council came up with the EcoIsland aspiration without following up with anything useful, because when David Green offered to do their job for them they took the opportunity… Read more »
Vote Up24-3Vote Down
tyke

There goes any suggestion the film takes an impartial view then. I think Cartesianism is the word for it. Well, one phrase anyhow. I was looking to attend this so thanks for saving me the time, Steve.

Vote Up4-23Vote Down
Steve Goodman
There goes any suggestion tyke takes an impartial view then. The film is a documentary, and simply documents the facts. It started as a very important look at what if any progress has been made since David George’s excellent “Thin Green Line” documentary looked at some good green work being done on the Island, what went wrong with the potentially world-leading EcoIsland project kicked off by the… Read more »
Vote Up20-4Vote Down
tyke

Well if an American University has asked to show it then I take it all back. Proper custodians of the environment are the Americans, don’t you know.
I will watch it though, despite your painting it as an exercise in confirming one’s own preconceptions.

Vote Up4-23Vote Down
Steve Goodman
? Unsurprisingly, some of the hundreds of millions of Americans are indeed environmental custodians, and their numbers have increased in response to Trump becoming president; plenty of other politicians, individuals, and businesses seeing the urgent need to improve are much more willing than he is to get on with doing what was agreed by the previous president and every other leader at the last climate crisis conference… Read more »
Vote Up17-3Vote Down
Steve Goodman

Wightwash is now freely available to view, and to forward to anyone else you think might be interested;
https://vimeo.com/291380278