Friends of Dinosaur Isle outline their vision for an exciting future

Following OnTheWight breaking the news about the uncertain future of Dinosaur Isle, we approached the Friends of Dinosaur Isle asking them to outline their vision for what the popular attraction could be in the future, while staying in the hands of Islanders. 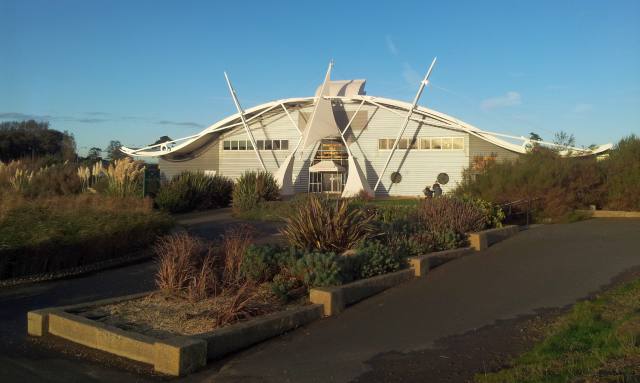 Jeremy Lockwood, post-graduate researcher with University of Portsmouth, shares this vision of the future of Dinosaur Isle from the Friends. Ed

Sandown Bay is blessed with golden sand, clean sea, stunning views and a fascinating marine ecosystem, but what makes it really special are the rocks beneath it. 125 million years ago they were overrun by dinosaurs whose bones now lie silently under the houses, shops and streets but regularly fall from the eroding cliffs.

They attract huge interest from the science community, with world class research being undertaken by universities and London’s Natural History Museum.

Why did Dorset County Museum get £11.3 million of lottery funding last week when our museum is desperate for funds? This demonstrates the huge potential a fully accredited museum with such a rare collection could have for the regeneration of Sandown Bay but also shows that we have a lot of catching up to do.

It would fail to qualify for accreditation and grants, and would not attract new donations. In short it would cease to be a proper museum.

Run as a charitable trust
The Dinosaur Isle Development Group want to see the museum run as a charitable trust. This would free the museum to make its own decisions and importantly open the doors to grants and funding for expansion, as well as encouraging volunteers. We have crates full of dinosaurs waiting to be exhibited and have plans for the museum to become much more interactive with lots of new activities for visitors.

The museum will also be a focus for a science hub (Discovery Bay) for the Island, linking with local groups to provide fun-science days out for schools and families, while bringing a new brand of tourism activity to the bay. We are also talking to universities who wish to have a greater presence on the island, with all the benefits that would bring to our youth.

Developing the Bay, collaboratively
A safe and thriving museum will work hand in hand with businesses to develop other areas of the Bay. A dinosaur themed attraction with an accredited dinosaur museum at its heart surrounded by the zoo, and science activities on the beach could be a winning combination to kick start regeneration in Sandown and attract substantial grants.

There is a one off opportunity here for the council to work with the community to form a trust to safeguard and develop the collection and museum while coordinating businesses in the bay.

The Island has a great and valuable heritage in its dinosaurs. It’s time to cherish them and let the world know.

newest oldest most voted
Colin
The IWC bleat on about regeneration and yet here is a small attraction with an international reputation and with huge possiblities that could be the centrepiece of a properly thought out plan for the area. Sandown is crying out for a proper place in the modern world with a reason to visit it. And what have we had so far? A proposal for a fast food outlet… Read more »
Vote Up170Vote Down
electrickery

No doubt Cllr Mrs Andre will tell us on this forum what action she is taking? Sandown has become a tourism embarrassment and IWC is, as ever, doing nothing. Only last week Visit Isle of Wight was asking for suggestions on how to upgrade our tourism offering – what’s the matter with them, are they blind or daft?