Hare and Magpies at Arreton

James Pickett tells us about a new carving at Arreton.

We’d like to welcome new contributor, James Pickett, onto the VentnorBlog team. James lives in Arreton and is passionate about the Island. He’s agreed to share his experiences of life on the Wight with our readers. Ed 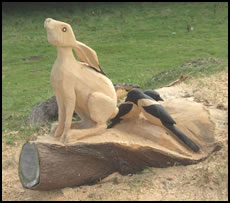 If you take the Sandown Road from Newport, and pay attention as you approach the turn-off to the Hare and Hounds, there is a new character on the opposite verge, where there used to be a fallen tree.

The tree, a Macrocarpa, had to be tidied up, but the stump was left while its fate was decided.

Happily, rather than remove it, Ian Boyd from the Island 2000 Trust proposed a carving (the cost was much the same) and approached Paul Sivell, the chainsaw sculptor, who suggested a leaping hare, now labelled the Arreton Hare.

I think he looks more like a moon-gazing hare, a creature with a mystical past and associated with growth and good fortune, but either way, he is a fine animal and it is a pleasure to have him close to my own front door. 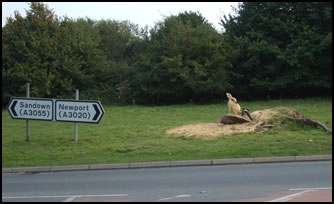 The magpies are a delightful addition, and those of you who are old enough to remember the ITV children’s programme of the same name will doubtless remember the rhyme, ‘One for sorrow, two for joy’ so I hope they never get separated.

A bouquet, too, for the Parish Council, who stumped up (pun intended) some of the money. Nice when that happens.

Take a look at Paul Sivell’s Website, he does some amazing stuff.

Read other references about Paul Sivell on VB

Filed under: Community, The Arts

5 Comments on "Hare and Magpies at Arreton"

Wahay, James. You’re eligible on two counts now to join us in our (all too occasional!) Maharaja outings. Nice one.

Vote Up00Vote Down
Bertie
JP, I would keep a close eye on it if I were you. Ventnor West have lost several expensive plants and other items, (mostly related to the building trade) in the last few weeks. There appears to be a team of tea-leaves going around lifting whatever is not chained down, or digging up anything that looks easy. In the words of a famous islander “Keep ’em peeled”… Read more »
Vote Up00Vote Down
James P

That thought had crossed my mind, Bertie, but since the council wanted Â£350 to dig up the stump, I’m guessing that it wouldn’t be a take-away job. Hope not, anyway…

WRT to Indian (or possibly Bangladeshi) restaurants, we seem to be spoiled for choice. Time for a bloggers nosh again, with any luck!

[…] Talk about getting one up on the hare and magpies in Arreton. […]