Assistant Harbour Master at Newtown says he owes his life to all those who quickly and expertly came to his aid. 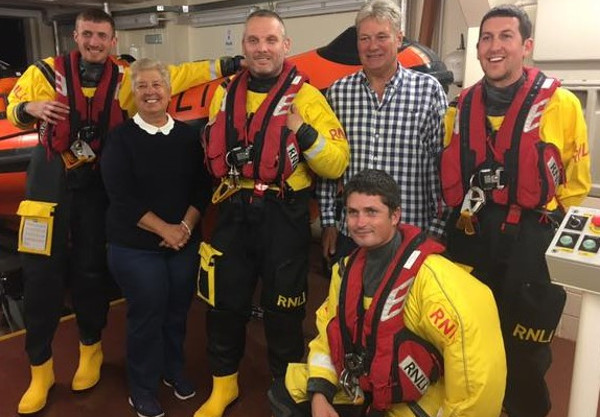 A man who said he would have died but for prompt emergency treatment he received in Newtown Estuary in the summer paid a ‘thank you’ visit to Cowes RNLI lifeboat station.

Jack Cameron-Wallace (pictured above), who was accompanied on the visit by his wife, Marie-Anne (pictured above), had been working as Assistant Harbour Master at Newtown last June when he collapsed with a heart attack in his boat, hitting his head, while collecting mooring fees.

Transported up the creek
After being initially treated by medically trained staff who just happened to be on a nearby yacht, he then received urgent resuscitation procedures on the yacht from a paramedic, winched down from a Coastguard helicopter.

Because the yacht was located well up the creek the lifeboat then conveyed the man out of the estuary to be winched into the helicopter and taken to Queen Alexandra Hospital, Portsmouth.

Owes life to rescuers
Anne-Marie told lifeboat members at the Cowes station that her husband, who spent two weeks in Queen Alexandra, owes his life to all those who so quickly and expertly came to his aid.

The couple presented two tins of luxury biscuits for the crew, a cheque for the RNLI and a bottle of fizz to be auctioned for funds.

“It is lovely to see you are on the mend, and it is such a kind gesture to come and visit us like this.”

Makes efforts worthwhile
Mark Harker, Helm of the lifeboat on the call-out, said,

“It makes all our efforts so worthwhile when we learned at first hand of such an excellent outcome.”

Jack said they had already visited those manning the yacht and would soon be visiting the helicopter crew at Lee-on-Solent.