More than 130 Islanders gathered at Compton on Sunday to voice their concerns about fracking on the Isle of Wight. The gathering raised awareness of the campaign and even made it onto the BBC local news (watch the video below). 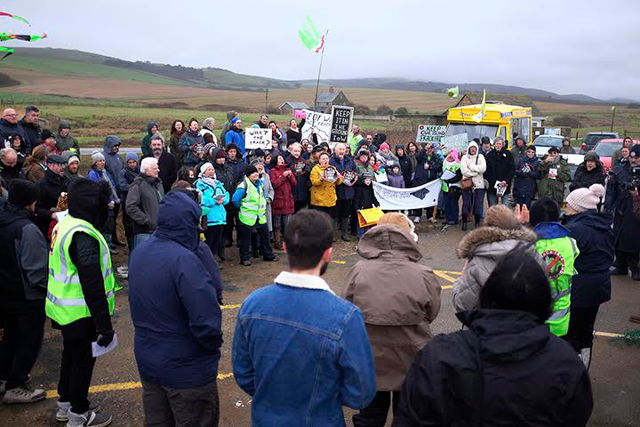 Thanks to Morgan from Frack Free Isle of Wight for sharing this report and Patrick Eden for the photos. Ed

More than one hundred and thirty Islanders came together on Sunday at Hanover Point, Compton Bay, braving the wind and rain to demonstrate their concern about potential oil and gas drilling on the Isle of Wight.

This followed Thursday’s announcement by license-holder UK Oil & Gas Investments PLC (UKOG) that they intend to accelerate plans to drill for oil on the Island. The gathering was part of ‘No Fracking Way’, a national day of action which saw thousands of people take action in 35 counties across the UK.

Waving handmade banners and flags, and singing protest songs, the mood of the crowd was both festive and resolute. Islanders of all ages and walks of life were welcomed to the microphone to speak their concerns about the prospect of oil and gas drilling on the Island.

Heather White, a landscape ecologist from Freshwater, evoked the surroundings of the gathering in her remarks, gesturing to the downs and open ocean. She said,

“This is such a beautiful island, we all want to keep it pristine.”

Another sign echoed the call of the international climate change movement to “Keep It In The Ground IoW,” referring to the need to keep 80% of proven fossil fuel reserves underground to avert catastrophic climate change.

“We can find much better alternatives”
Derek Farrell, an electrician from Shanklin, said,

“We’ve had enough fossil fuels, to pull more out of the ground now is total insanity.”

Tanja Rebel, from West Cowes, also described her concerns as being on a global scale. She said,

While UKOG’s chairman said Thursday that drilling in Arreton could be economically viable “without massive hydraulic fracturing,” commonly known as fracking, Frack Free Isle of Wight is determined to show that no form of drilling will move forward without massive community resistance. She described hearing the stories of young people from the countries most vulnerable to climate change around the world, and the failure of the Paris Agreement to mandate fossil fuels stay underground.

“It’s up to us. We are going to keep fossil fuels in the ground, those of us that love the places that we do.”

Arreton meeting
Later on Sunday afternoon, Frack Free Isle of Wight held a public meeting in Arreton, where UKOG will likely first apply for permission to drill in April.

Close to fifty local residents crowded the community center for a presentation on the potential impacts of the project, and an energetic discussion was held that showed the strength of feeling against the project.

Next meeting
The next Frack Free Isle of Wight public meeting will be at Totland Church Hall on February 23rd, from 7-9pm. All are welcome.

Videos from the gathering on Sunday can be seen on the Frack Free Isle of Wight Facebook Page.

The BBC traveled over for the event and the gathering made the BBC South news.

Posted by Frack Free Isle of Wight on Sunday, 31 January 2016

Good to lead the news broadcast with this, but misleading of the BBC to describe the unclean carbon company’s 219 (million barrels estimate, of which 17m only is estimated as recoverable) as “several hundred million”.

So I assume good jobs arent needed on the island.?

Vote Up0-2Vote Down
Frank James
Red F. and their friends don’t seem to think so judging by their plan to destroy successful specialist businesses with a greedy E. Cowes land grab. Those of us who recognise both the need for good jobs on the island and the stupidity of worsening our carbon climate crisis would welcome investment in the safer, cleaner, greener energy sector. The Germans are doing it, and they’ve created… Read more »
Vote Up20Vote Down
tiki

Why will the authorities refuse to answer the “Godzilla” question?
Are we ruled by the Lizard People?
Where was David Icke?

“Massive community resistance”? 130 people. That’s 0.1% of the island population then who think they’re speaking for us all.

Vote Up0-2Vote Down
m coakley
I thought the Germans were far ahead of the UK in generating green electricity until a German friend told me that they were still opening coal powered plants. The latest opened in Moorburg a suburb of Hamburg where she lives. She thinks it’s probably a lignite hard coal plant which is permissible under the EU Large Combustion Directive. Apparently over a million Germans (pop 80 m?)have had… Read more »
Vote Up0-2Vote Down