Prior to the start of the trial the younger riders presented a cheque for £500 to Home-Start IOW, their charity of the year. 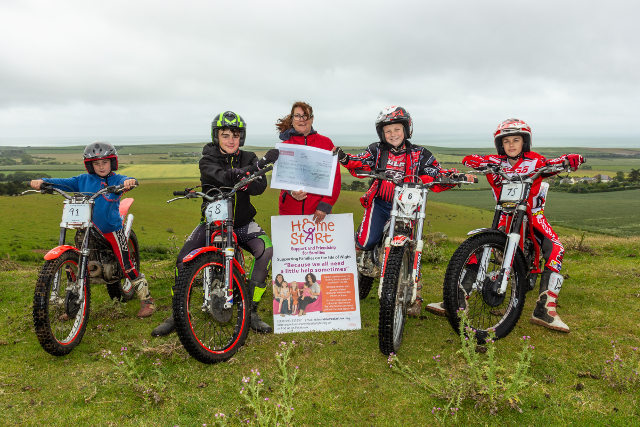 The Isle of Wight Motorcycle Club held the second round of the 2019 Pat Death Summer Series Trials Championship on Sunday 16th June at Limerstone Farm. The Club would like to thank Geoff and Mary Case for welcoming us back to this venue which has stunning views out across the English Channel.

Supporting Home-Start, IOW
The Club supports a different charity every year raising funds at the Annual Awards night and at the very popular Wight Two Day Trial. This year’s adopted charity is Home-Start, IOW. Home-Start supports Island families with children under five years of age who are either vulnerable or experiencing difficulties – or both!

Prior to the start of the trial some of our younger riders presented a cheque for £500 (funds raise to date) to Home-Start, Specialist Support Worker; Rachael Brodie.

Course setters and Observers
The eight section course was set by Shaun Harris and Alan Gosden. The feedback from the riders following the four lap trial was very positive – proof if needed that the course setters did an excellent job. Many thanks also to the Observers for their help in helping to keep the trial running smoothly.

The Summer Series is made up of three trials and Adult riders must complete all three rounds (in the same class) to qualify for an award.

Youth classes
Alfie Haydon is the only Youth Intermediate rider in the Club this year but despite the lack of competition he always manages to post very competitive scores, today was no exception. He ended the day with a total of just thirty-one.

Dan Locke and Alfie Gaskin were head to head in the Youth Novice’s. It was Dan who finished the clear winner from Alfie, who continues to improve with every outing.

Bertie Grieve is currently the youngest member of the Club who is also gaining confidence with every ride. He was rewarded with the maximum ten Championship points in the Youth Beginner class. Excellent effort by all these four.

Expert class
Over in the Expert class it was Rob Howard who fought off a determined effort from James Stay. These two were very evenly matched but Rob just about took the win with eleven, James on fourteen.

James’s afternoon didn’t get any better after he sustained a nasty injury to his hand whilst loading his bike following the trial – then spent over three hours at A&E accompanied by his good mate Rob H. We wish him a speedy recovery and hope that no lasting damage was caused.

Intermediate class
The Intermediate class proved to be another very close fought contest, only six marks separating the first three! Tom Richards narrowly took the win with a loss of twenty-nine from Jos Wright, only one mark behind.

Over 50s and Clubman
Rory Stephens was all on his own in the Over Fifty class, he completed the trial on thirty-five.

Two Clubman riders in action this afternoon, resulting in a win for Colin Brodie who finished fourteen ahead of Phil Chase.

Novice classes
Meanwhile over in the Novice class Joe Taylor will be buzzing after taking the win with an eight mark cushion from Paul West. Steve Chase finished in third.

Nick Symes, another lone rider, took his ten Champ points in style – he completed the trial with the lowest score of the day – a miserly seven dropped marks. John Townsend (British Bike class) managed to get around with a total of thirty-seven.

Mike True took the spoils in the Adult Beginners, finishing on eleven. Geoff Taylor proved to be the pick of the bunch in the Sportsman class, the second best performer on the ‘C’ route.

Next meets
The Club next meet for the third and final Summer Series Round on Sunday 21st of July. Please keep an eye on the Club website where all the details will be available once finalised.

Just one more date for your diaries – The Bighobbler Trial, in memory of (the legend) Nigel Crouch, will take place on Sunday 18th  of August. Once again all the details will be made available very soon. If you can only make it to one trial this year – make it this one!