Jonathan Dodd returns with his Sunday column. As always, a great long-read. 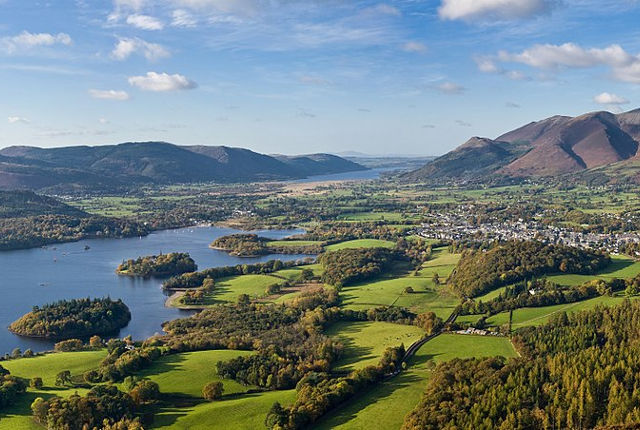 As a child I don’t remember surprising myself very often. In almost every circumstance I can remember, I was either somewhere unimpressively keeping up with everyone else, or there would be a call from some alert adult bringing my attention back from whatever or wherever it had strayed to, and encouraging me to return to the fold. I was not an unusual child at all. Occasionally, though, I did find myself doing something different. I remember the first time I went to the Lake District, and there was an expedition to walk up to the top of the nearest fell.

I just found myself going up and up, with no thought in my head. I just kept on going, regardless of anyone else, completely overtaken by the sheer joy of ascending, with the thinning air in my lungs and the sparse mist clearing as the sun grew stronger in the sky. Every now and then a sheep would appear and gaze at me in surprise. It was magical, and I was, for that small time, unstoppable. Until I got to the top, and turned round in a circle, just staring at the glorious landscape. For the first time, I could see everything around me, uninterrupted by anything at all. I was almost giddy with the wonder of it.

Impelled mysteriously to seek out hills
To this day, when there’s any hill, up I go. It’s a mystery to me, but one I adore. I sometimes wonder how that arrived in my mental make-up. Was I born with a hill-ascending gene? Was it race-memory, or species memory? Maybe the Spiritualists are right, and memories do leak into one’s consciousness from previous lives. Did my very young eye catch sight of a picture-book illustration of the view from a hill? I have wondered whether I would ever have known about this hill thing if I hadn’t ever gone to the Lake District or found myself among hills. Would I have never known, or would I have been impelled mysteriously to seek out hills? Has it influenced any decisions I might have made during my life? Am I over-thinking everything?

Of course, over-thinkers like me aren’t going to let anything like this alone. I started thinking about all the other things inside me that I haven’t even noticed. Why did I bite my fingernails until I was 33? Do I wear shorts a lot because my father did, or would I have done so even if he never revealed his knees to the world? I sometimes think my father’s knees were the thing I best knew about him. I know all this could lead to madness if pursued too far, but it does fascinate me.

Change-deniers and change-refusers
Then, I find myself saying that I’ll probably never know. And then I wonder if maybe we will find out the mysterious mechanism of the things that we are and all those small items inside us that come together to make us who we are. And then I wonder whether that would make any difference. There are people out there who believe we can’t change, and there are people who think we change all the time. And there are people who don’t know, and people who never even think about it. There are even change-deniers and change-refusers.

So much of how we behave is influenced by our concept of who we are. I know lots of people who see themselves in terms of the labels they hang round their necks. “I’m 33, I’m married, I have three children, I work in a shop, I drive a Ford Fiesta, I support Wolves”. There you have it. Indisputable facts that place someone firmly in place, but yet say nothing about them. Then there are the other labels, that aren’t so often spoken out loud. “I steal things. I drive too fast. I wish I could give up smoking. I know I eat too much. I hate (fill in specifics here)”. And the things we worry about because of other people. “Should I wear this? Will they laugh at me? Am I actually a worthwhile person?”

We might do something about it, or we might just worry
All this is so very complicated, and it may not even be very important, in the long run. Everyone is so precious, and so complex, and so delicate, and yet we’re tough. We carry on, we strive to live, or succeed, or survive, or make something of ourselves, or create things that we’ll be remembered by. And we worry about ourselves and our children, and our future and theirs, and we might even do something about it, or we might just worry. None of us has a clue, really, what any of it’s actually about. So we join groups that tell us they have the  answer, and we become believers, probably because it’s better to believe something than not believe anything, and it’s better to be with others who agree with you than being on your own. Or maybe we prefer to be on our own, responsible to nobody else, not being told how to be or what to say.

I was thinking the other day about genes. The first completely-mapped individual genome cost a million pounds to put together. Nowadays you can get your genome done for maybe only hundreds, and the price is always going down. There may come a day when everyone’s genetic map will be known and available. We’ll be able to find out whether we’re going to be more likely to get certain diseases, or how long we’re likely to live, and we can decide to live with it or do what we can to push back. Along with that, crime will become more difficult to get away with, and then people will find ways to get round it, or alter their genes, and medicine will change our genes too, either to counteract bad genes we might be born with, or to make us better at sport, or more intelligent, or more good-looking.

I once worked in an office where there was a mix pf people, full-time and temporary. Two women that I knew were having a heated conversation one day, and asked me what I thought about a colleague. When I asked them why, they said he had been harassing them sexually, which astonished me. “What exactly has he been doing?” I asked. “He’s creepy. He comes on to us all the time!” They were so worked up about it that they were going to report him to our manager. I couldn’t get them to say what exactly he was doing that was so upsetting, so I asked them to let me observe and see if there was something I could do to help, before they made their accusations public.

You got too close. I didn’t like it
I watched him for a while, getting on with his work and talking to people, and I could see there was a problem, which some people hardly noticed but others were uncomfortable with, and I was convinced that he didn’t know what was going on at all. So one day I waited until he and I were alone, and I asked him whether he was having difficulty with anyone. He said that some people didn’t seem to like him, and he was upset about that. I asked him to let me try something out. I spoke to him from about a metre away, and he leaned in towards me. I asked him if he was comfortable with the distance. I gradually moved nearer and nearer, and he was fine. Eventually, I got so close that our faces were nearly touching, and then he pulled away.

“What happened there?” I asked. “You got too close. I didn’t like it”.  So I showed him how far away my comfort zone was, and we could see that his was much closer than mine. “I think you lean in a little too close, that’s all. Just watch their faces, and if they pull back, then keep that distance. It won’t be a problem any more.” He stood there, transfixed, and I felt so sorry for him, because I could see he was going through a whole lifetime of moments when something had happened with innumerable people and conversations, and he was seeing every one of them in a new and terrible light. I thought that he had had no idea, and nobody else had realised, or even worse, nobody had ever said anything to him about it.

Is this your problem, or theirs?
He over-reacted, of course, and talked to people after that from far too far away, but the women stopped thinking of him as a sex offender, and all talk of sexual harassment went away, thank goodness. He left soon after, so I never found out if he managed to find relationships easier afterwards, but at least he had a better chance of having relationships with people. So, if there’s something about me, or anyone else that you know, that you really can’t stand, take a moment to think about it. Is this your problem, or theirs? Might there be something you could do to improve their life or yours? It’s not always easy, or even successful, but is it worth it? Would you like someone else to tell you about something like that?

Life is so interesting, when you really look and think about it all. Don’t you agree?