Cllr Ian Ward also says it’s his view the Isle of Wight needs to have Undercliff Drive road open again, but will not make a decision until after the consultation. 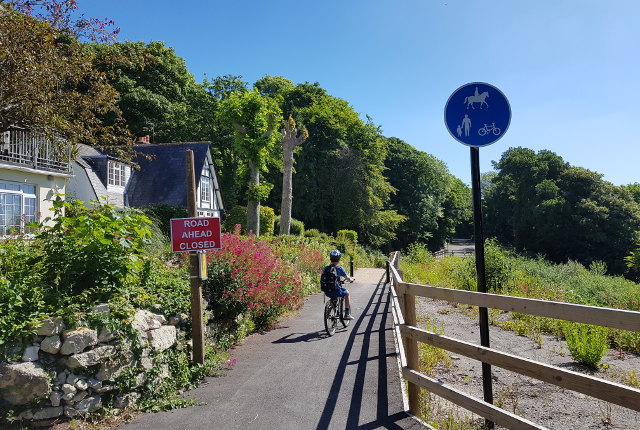 A consultation on the reinstatement of Undercliff Drive to traffic is being launched by the Isle of Wight Council.

The local authority is seeking the views of residents, businesses and visitors on possible plans to re-open the road which suffered significant landslips in 2014.

A consultation is being launched to gauge public opinion.

“My view is it cannot be beyond our engineering capability to find a way to remedy a landslip of less than 100 metres.

“We have houses and businesses spread along the length of the Undercliff, but the economic damage of the closure has spread well beyond these areas with businesses as far away as the West Wight also noticing a drop in trade and tourism following the closure.

“However, while my personal views and that of the Cabinet are clear, we acknowledge others may take a different view and this consultation seeks to gauge public support for the plans.”

Background
Undercliff Drive was affected by major ground movement during the very wet winter of 2013/14.

The landslides led to the loss of the road at two locations, land-locking nine homes between the two sites.

In 2016, access was restored to these properties along with through-access for walkers, cyclists and horse riders.

£200,000 for design
The cost of producing a design to re-open the road to traffic is estimated to be around £200,000, and would involve topographic surveys, ground investigation boreholes, a stability analysis and an environmental impact assessment.

£1-2 million to reinstate road
Currently, the cost to re-instate the road is estimated to be between £1 million and £2 million, dependent on whether the scheme allowed one or two-way traffic and if the new route was restricted to vehicles below a certain weight.

The council has acknowledged that ground movement will continue in the future and any investment in the area will need to take this into account.

Ward: “My view is the Island needs to have this road open”
Cllr Ian Ward, Cabinet member for infrastructure and transport, added:

“It’s a complex issue that doesn’t lend itself to a quick solution, but my view is the Island needs to have this road open and we should be making every effort to do so despite the obvious challenges.

“However, any decision will only be taken after consultation with Islanders and we are encouraging everyone to get involved.”

Take part in consultation
A six-week consultation will start on Friday 14th June 2019 and end on 26th July 2019. People are encouraged to complete the survey online.

So, no reason why they couldn’t sort out 100m of landslip? Mmmm! A project of more than £2m. Anyone remember who was responsible for delivering the floating bridge, which was much less than 100m and just a bit more than £2.2m. Oh yeah, that would be the same people.

So Dave Stewart wants to spend £2m on a road for his ward , buying his votes with our money ahead of local elections? Meanwhile, across the entire island, residents services suffer appalling inefficiency and cuts at the hands of the ineptly run regime he presides over. Priceless.

Vote Up24-2Vote Down
JossS
If Cllrs Dave Stewart and Ian Ward really believe it is just a 100 metre stretch of Undercliff Drive that needs reinstating perhaps they should take a drive along the whole stretch of this dark and gloomy road where five years of vegetation growth has overtaken although the plus side to this is that wildlife is thriving. Cllrs Stewart and Ward’s arguments in support of the reinstatement… Read more »
Vote Up20-4Vote Down
Spartacus

I see the chain ferry is out of action again and we are considering reinstating the Undercliff Drive. How can you trust this council to do anything properly they continually waste money and have not got a clue. We need real change with people who truly represent the Island population. They couldn’t manage a corner shop.

Vote Up15-1Vote Down
Spartacus
Absolute madness to consider reinstating the Undercliff Drive, why because Government acknowledge the area as the most significant ground instability problem in Great Britain and largest urban landslide complex in Western Europe so that in itself tells us the road needs to remain closed. Even the Council cabinet accept ground movement will continue in the future. Leading geologists who know a lot more than anybody about the… Read more »
Vote Up19-6Vote Down
Spartacus

Ventnor Town Council oppose reinstatement of the Undercliff Drive. At last some real positive news. We now need a public enquiry to stop Councillor Stewart pursuing this any further which is really about self interest and not in the interest of the Island

Actually you could divert the road to around the back of the houses similar to that which was done at Beauchamp house and compensate the affected householders by giving them the land in front of their houses where the current road is.

Vote Up19-11Vote Down
buckle
Possible, however if there were any objectors, it would trigger a local public enquiry into the CPO. I would be very doubtful of the Council wishing to go down that avenue. It may risk closer inspection of the failed geotechnical scheme and inevitable media interest. When you look at how other Councils have reinstated their infrastructures after land movement, in areas of land instability, it does highlight… Read more »
Vote Up41-3Vote Down
laurentian

It should be re-instated as soon as possible, and Ramboll should pay – it was their failures that caused it.

Vote Up18-15Vote Down
Benny C
Yep, let’s build more roads through areas of irreplaceable landscape, add more chemical pollution – wait, even better, let’s spend huge amounts on unstable land and build them there. If businesses on West Wight are so fragile this road has impacted them then sorry but clearly they would have failed anyway. £2m would move a fair few, or maybe reduce their sky high Council rates bills. There… Read more »
Vote Up31-31Vote Down