More great news for another Isle of Wight voluntary group, as IW Steam Railway is recognised with the Queen’s Award. Ed 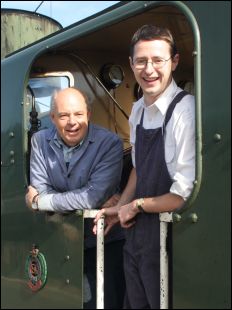 The Isle of Wight Steam Railway is thrilled to announce that we are a recipient of the highest award for volunteer organisations – The Queen’s Award for Voluntary Service 2012.

This major and prestigious award is ‘The MBE for volunteer groups’. The Award, made in this the Queen’s Diamond Jubilee year, has been given in recognition of the work, community involvement and achievements made possible by the IW Steam Railway’s many valued volunteers.

“This award is a very significant and appropriate tribute to the many hundreds of volunteers past and present who, over the past half-century, have each contributed so much to our work in preserving, restoring and bringing back to life an important part of our Island’s heritage”.

Determined volunteers
Volunteering has always been at the heart of the Isle of Wight Steam Railway development.

From the sheer determination and hard work of the small band of dedicated volunteers who saved one locomotive and a few items of railway rolling stock in the mid-1960s, through to the unswerving dedication and efforts of the 300-plus volunteers who keep the trains running in 2012, the millions of hours of volunteer activity have created what is now one of the UK’s leading heritage railway’s and a major visitor attraction for the Island.

Men and women of all ages
“Volunteers, both male and female, are aged from 14 years to 80 plus, and cover a myriad of tasks and duties,” said Peter Vail, General Manager of the IW Steam Railway.

“From locomotive maintenance to painting fences, from crewing trains to fund-raising, from gardening to pulling pints, and from relaying track to performing at special events, through volunteering many individuals have learnt new skills, developed new abilities and interests, and engendered lifelong friendships.

“Volunteering on our railway really has opened-up new opportunities for so many people. This award truly recognises their excellent work and I take this opportunity to sincerely thank them all for their contribution towards the success of our Railway”.

A richly deserved award. All the railway’s hard-working volunteers should be very proud to have been recognised in this way