Residents turn out in their droves to hear about surgery closure 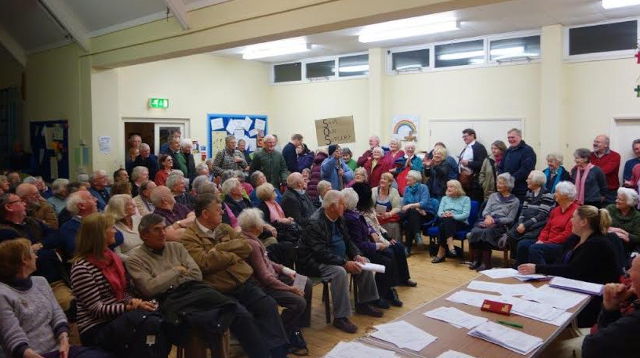 Thanks to Mayor of Yarmouth, Steve Cowley, for this update on the closure of Yarmouth surgery. Also included are questions and answers from Dr Thomson. Ed

Following news of the closure of Yarmouth Surgery I was invited to the Patient Participation Group on Thursday 27th February. This had been bought forward from the next planned meeting of March 6th.

Drs Thomson, Magee, Walker and Marshall were present with the temporary practice manager and 11 Patient Representatives

Loss of staff
The West Wight Medical Practice has or is losing four Doctors and the Practice manager.
There is a national shortage of Doctor going into General Practice.

There are 80 GP posts on the Island; there are currently 10 vacancies, four of which are at WWMP. Dr Thomson had provided help at other Practices with Out of Hours services over the last two weekends.

Difficulty recruiting new doctors
Dr Thomson said that younger Doctors had a different work life balance these days. As indicated in the letter to Patients circulated to all 11,000 patients, this includes 1,800 registered at Yarmouth. The Practice has one new female GP.

The remaining Doctors have asked NHS England to organise a new service for the West Wight in which they expect to be involved.

I asked who it was best to direct patients’ concern to, as NHS England were the group ultimately responsible for securing services for local patients. I was advised that all communications should be to the practice.

Share your views with NHS England
Dr Thomson has since the meeting advised me that he is meeting on Wednesday evening with the Clinical commissioning group in Newport, the only agenda item being the future for primary care in the West Wight Practice area.

I have spoken to NHS England about the situation here; they have confirmed that all communication should go initially to the Practice but can also be sent to them addressed to: Melanie Smoker, NHS ENGLAND, Oakley Road, Southampton SO16 4GX

Yarmouth surgery – statement Dr. G Thomson
The decision to close, temporarily, Yarmouth surgery has prompted several comments and questions. This is written in an attempt to answer those queries.

Q. Is this in fact permanent closure ?
A. I hope not. I was one of four doctors who opened that building in 1983, I have enjoyed my share of deputizing in Yarmouth since then and hope to reopen the surgery as soon as possible. Dr. Walker explained to the practice patient group last week that travel to and from Yarmouth at a time of acute doctor shortage would reduce time spent on health care.

Q. Is this all about saving money?
A. No discussion on that subject has occurred. This decision will have a minor negative effect in that direction.

Q. Why are all the young doctors leaving?
A. I cannot comment on individual decisions. It is true that G P is less popular than previously.

Q. Will Dr Walker see those patients who wish to see him?
A. Yes

Q. A letter was promised mid week but did not arrive until Saturday. The County Press knew of the story early in the week. Yarmouth staff were sworn to secrecy. Why was this?
A. Doctors spoke first to staff, then to organizations most affected by doctor shortage e.g. Ambulance, Accident / Emergency, Beacon GP centre and Pharmacies. I do not know who contacted the newspaper. When reporters asked me several times for comment I refused to discuss the matter until letters had been sent to patients. Royal Mail confirmed that letters had been sent on Wednesday.

Q. Why no consultation?
A. Drs. Magee, Walker and I did not know late last year that four doctors would be leaving within three months. Consultation would be required for permanent closure; I do not know the process and whether that would extend beyond Yarmouth.

newest oldest most voted
The Sciolist
This practice is run by Dr Thompson and Partners. The shortage of applicants to work with this partnership is quite possibly financial. The partners get a good share of the surgery income, the humble employed Doctor gets only salary. I cannot see how any potential Doctor would think this a fair system? I heard a rumour that a single weekend shift in Newport’s Beacon centre can now… Read more »
Vote Up00Vote Down