This ‘independent’ candidate in the local elections says he’s a member of both the Labour and the Conservative parties, but also had his leaflet printed at the IW Conservative Association 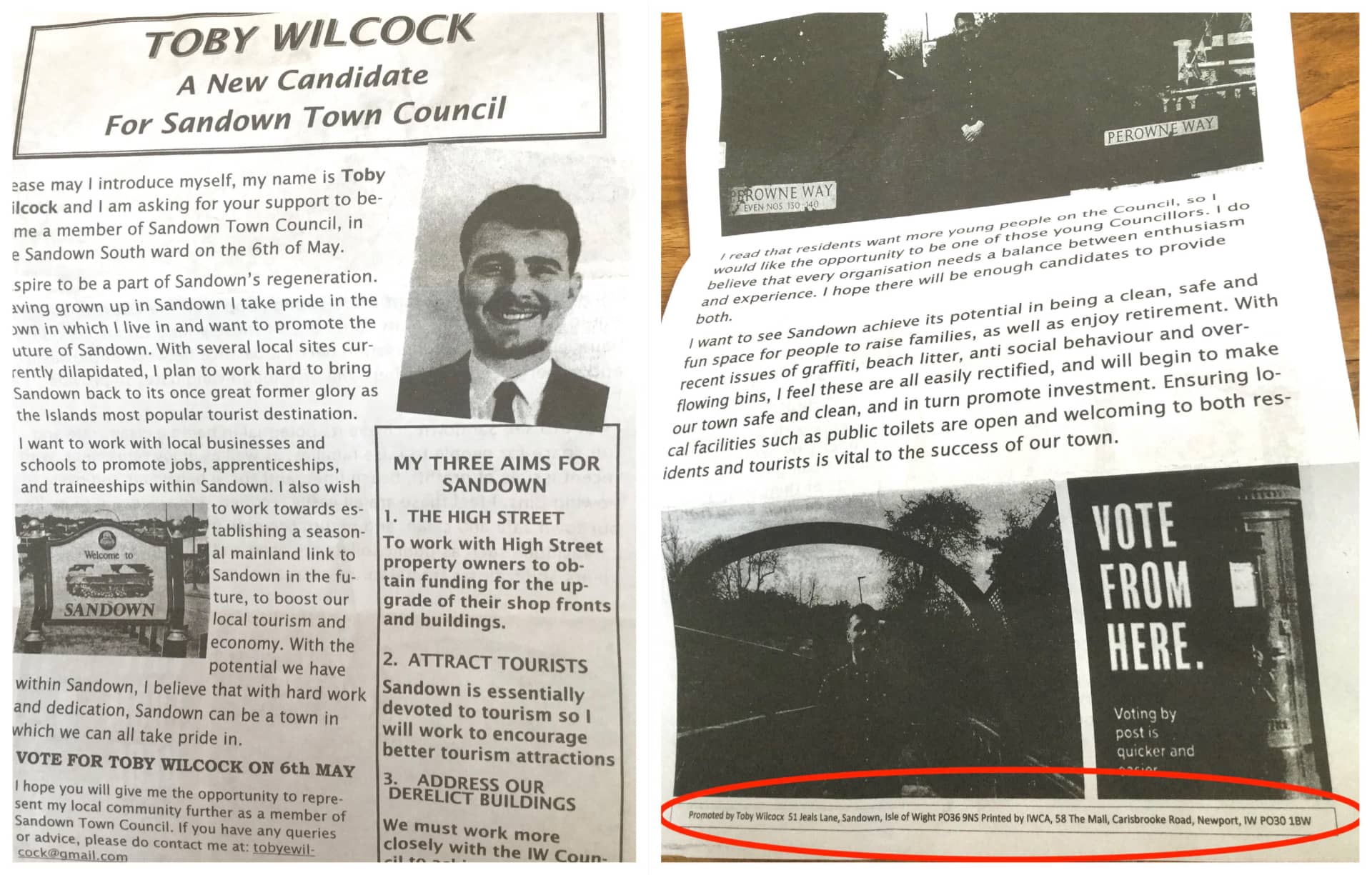 Debate has been hotting up over on the Sandown Hub Facebook page about the election leaflet for one of the town council’s election candidates.

Toby Wilcock is hoping to win the Sandown South seat in next week’s local elections. He posted his leaflet to the Hub’s page last week and when questioned explained that he was standing as an independent candidate.

Goodchild: “Would you feel ‘hoodwinked?’”
This afternoon however, it was pointed out by Sandown resident Ali Goodchild, that Mr Wilcock’s election leaflet was printed by the IWCA, 58 The Mall, Carisbrooke – the address for the Isle of Wight Conservative Association.

“Would you feel ‘hoodwinked’ if a candidate claimed to be Independent … then received their election leaflet printed by the Isle Of Wight Conservative Association?”

A member of two parties?
News OnTheWight got in touch with Mr Wilcock earlier today to ask whether he was a member of the Island Conservatives and why he had his election leaflets printed by them.

He explained that he was a member of both the Labour Party and the Conservative Party – something that is against the membership criteria of both parties.

“For the record, I am standing as an independent candidate for two reasons. Firstly, I do not believe the local council should be run by party politics. Secondly, I wanted to be elected on my own merit and not just because of membership of any party.

“I am a member of both the Labour party, and the Conservative party, but am not an active member of either, I have never attended any party meetings of either party.

“If I am elected I am keen to be able to maintain good relationships with those people and any others who are like myself, more interested in working to make Sandown better than in party politics.”

IWCA: Will consider this matter after 6th May
The mystery still remains how or why David Pugh’s IWCA is listed as the printer of this candidate’s leaflet.

Mr Wilcock chose not to answer our question on this. We’ve asked him again.

“Yes, we did print the leaflet. We often print leaflets for party members seeking election to town / parish councils.

“Given what I have now read in your article about Toby’s membership of two political parties, we will consider this matter after 6th May.

“In the meantime I wish him well with his election campaign.”

When Labour said anyone could join the party for a fiver, loads of Tories joined simply to cause chaos.

Now Conservative candidates are realising they are unelectable many are masquerading as independent or Labour candidates to fool the electorate.

Apologies – this is mentioned in the article.

Can someone tell Mr Wilcock please that April 1st was about 4 weeks ago??? Or is he really living in cloud cuckoo land? Seems that this is just about vote splitting…

I would simply avoid voting for him

This sort of clowning is precisely the sort of thing that damages genuinely independent candidates.

Unless it’s done by a clown called Johnson,then every one is in raptures…..

Vote Up16-3Vote Down
Bob Blezzard
I must confess to having voted for him by post before receiving his leaflet. Given the poor choice of candidates in Sandown South it seems to me that his greatest appeal is not being either Ian Ward or Gary Young, both of whom in my view have spectacularly failed as town councillors presiding over the 74% council tax hike in 2018. People will remember that it was… Read more »
Vote Up25-1Vote Down
grahamg

At least he disclosed his true allegiance on the leaflet, however inadvertent!
Unlike many other “independent” candidates across the island.
It’s not just this chap posing as independent, several are standing in town and parish councils as independent but also standing for IOW council seats as lib, lab or con.

Vote Up190Vote Down
Robert Jones
You can’t be a member of two parties at once, except in the case of Labour we do extend membership to members of the Cooperative Party. But not – which perhaps will not come as a surprise – to the Conservatives. Mr Wilcock needs to decide where his loyalties actually lie – youth excuses many things, but not applying to join a party whose membership criteria you… Read more »
Vote Up170Vote Down
Geoff Brodie

As the former Labour, Our Island candidate in Bembridge has discovered.

Talk about split personality – let’s hope he makes his mind up soon is he Conservative, Labour or Independent or a Waste of a Vote?

Vote Up110Vote Down
chausettes
This candidate should be investigated by and reported to the local returning officer (and/or Electoral Commission) IMO – it has the appearance of an attempt to try and split opposition votes (i.e. Mr Wilcock is a ‘patsy’ or ‘shill’ candidate) hoping to draw opposition votes away from other candidates and pave the way for someone else. I’ll even wager this is a deliberate strategy conceived by Pugh,… Read more »
Vote Up90Vote Down
Mr Magoo

Neck and neck…..at 7.36pm, those of you with you a sense of humour were just behind the po-faced.

Vote Up70Vote Down
Mr Magoo
Election time on the Isle of Wight brings out the true character of its inhabitants, they are inherently tribal. This is from Wikipedia: “Between the Neolithic and Roman eras, southeastern Britain experienced significant in migration from the continent. Finds of late Iron Age coins, such as the South Wight and Shalfleet Hoards, suggest trading links both with nearby tribes and further afield. “The coins and ingots from… Read more »
Vote Up5-5Vote Down
Mr Magoo

He sounds the ideal candidate for all those who want to keep party politics out of town and parish councils. A foot in both camps and pragmatic.