Tour of Britain: Final leg of prestigious cycling event to be held on the Isle of Wight

In September 2022 the Isle of Wight will host the final leg of the prestigious Tour of Britain cycling event, expecting to attract 150,000 spectators, and being shown on TV across the globe 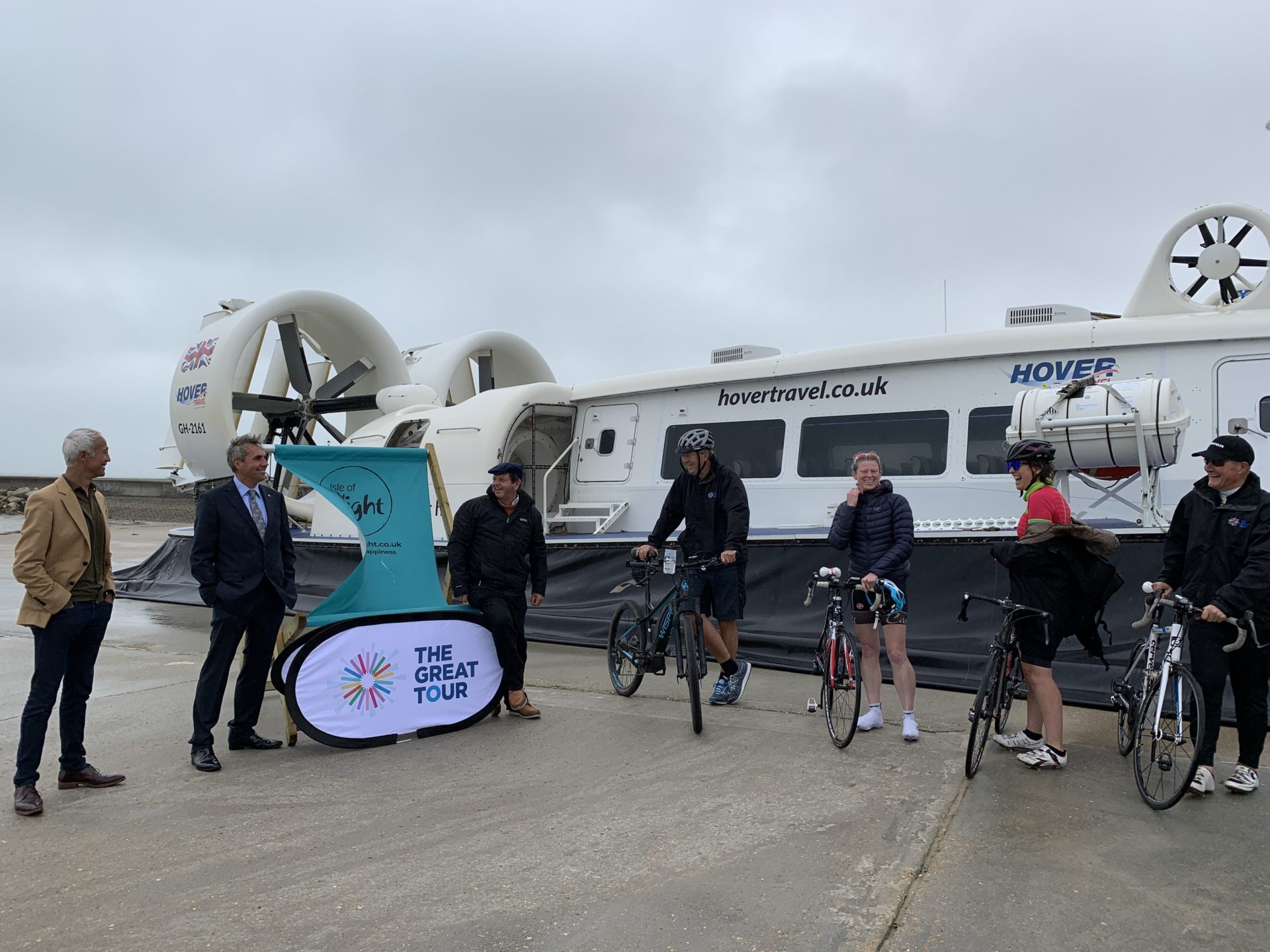 A national cycling event was launched today (Saturday) on the Isle of Wight — confirming the Island will host the final stage of the Tour of Britain.

Top cyclists will be making their way to the Island in September 2022 as part of the Tour of Britain.

Isle of Wight Council leader, Dave Stewart, signed on the dotted line, committing the Island to its hosting duties.

Start of charity tour
To mark the occasion, a team of cyclists, including professional cyclist Pippa York, set off from Ryde on ‘The Great Tour’ — a 6,700km 64-day ride around Britain raising money for charities.

Speaking at the event, Cllr Stewart said he wanted the whole Island to get behind the event, which could attract more than 150,000 spectators while being shown on television around the world.

Stewart: It is the first part of signing up to the Tour of Britain
He said:

“This has been a fantastic start to the fourth of July for the Isle of Wight – at Ryde. We have launched the Great Tour with some really top-level people. It is the first part of signing up to the Tour of Britain.

“I just want to get the whole Island behind it. I think it is fantastic: it is good for health and well-being, good for our Island, our economy and good for cycling and that is what we are all about now.”

2021 Cycling Festival
Other cycling events are also proposed to be held on the Island in the meantime, including a cycling festival next year.

Tour of Britain, managing director, Hugh Roberts, who is taking part in the circumnavigation of the British Isles, said they were launching the Great Tour in Ryde to help make the Island a future cycling destination – especially with the increased take up of cycling due to the Covid-19 lockdown.

Roberts: The epicentre of it all
He said:

“This is going to be the epicentre of it all. We start here in Ryde and go all the way around the Island, for about 88km today. Then we are going to go to Southampton and ride anti-clockwise around the island of Britain.

“We then come back here on the 5th September having ridden the whole circumference of the British Island.

“[The Tour of Britain] is really exciting news and we are hoping to try and turn the Isle of Wight into a place where people come for their cycling holidays in future.”

Mr Roberts said he thought the route might end in the south-western part of the Island with a big climb, but didn’t know any more specifics.

Whittle: Tour of Britain team and Sweetspot love the Island
Cllr Wayne Whittle, cabinet member for regeneration and business development, said the cycling event, like those the Island has hosted before, will help put us on the map.

“We have had lots of meetings with the Tour of Britain team and Sweetspot and they love the Island, they want to make it a venue for cycling renowned in the UK.

“Things like this put the Island on the map.  We want to open the Island up to all different demographics of the population to introduce them to our beautiful Island and that is what this is all about.”

Hosting Tour of Britain will cost £340,000
Holding the final stage of the cycling race is expected to cost the council £340,000 but said it hoped to meet most of the cost through sponsorship and had already agreed to appoint a third party to secure the funding.

12 Comments on "Tour of Britain: Final leg of prestigious cycling event to be held on the Isle of Wight"

Vote Up12-9Vote Down
Benny C
We get that many for a week at a time in summer. The island population doubles during tourist seasons and many many businesses survive and thrive as a result. We can easily cope. This is joining another league entirely, putting our tourist trade on the international stage , way better than that daft car racing idea in a Sandown that would have attracted a few mainlanders and… Read more »
Vote Up21-10Vote Down
chartman
Benny, I have to disagree… 150,000 visitors per week in the Summer? How do they get here? Across the bridge or through the tunnel? Not over the water that’s for sure! My point is that getting 150,000 ‘watchers’ here is complete bull ****.10,000 maybe… It’s just another totally unrealistic hype by the council. Oh, and don’t forget that in September all the ‘oldies’ flood the Island for… Read more »
Vote Up14-7Vote Down
Benny C
Cripes, please tell us how you get 10,000. There were over 44,000 visitor beds in holiday accommodation way back in 2005. So by your reckoning three quarters of them Went bust! Some probably have, as quite a bit of the stock is or was of terrible quality, but not 75%. My numbers are checked quite carefully. Even as far back as the early 2000’s visits were over… Read more »
Vote Up5-3Vote Down
Benny C

I should have made clear I haven’t factored in seasonal differences because they’re less clear but for August, peak month, Weekly flows will be huge And January Clearly will be almost nil.

Vote Up5-4Vote Down
Colin
I’m not sure if 150,000 visitors is going to happen; the article seems to suggest 150,000 spectators which is entirely different. If I was interested in watching a cycling race that was going the length of the UK then I would probably go to the nearest venue, not to an Island that is likely to have many roads shut for part of the day… However if half… Read more »
Vote Up9-1Vote Down
Benny C
Interesting point. I guess the real opportunity lies in the total viewers. Doubtless there will be a significant level of interest globally given it’s an international competition in an accessible sport with growing interest Across many generations. Working with the media to show the island off in its best light on camera would be of immense benefit to our economy and something IOWC will hopefully be planning… Read more »
Vote Up5-3Vote Down
Spartacus

4 wheels definitely better and safer than the two wheelers who infect us with their inconsideration. Think car!

Cyclists are the plague of our lives and are a law unto themselves. They have no consideration for anybody but themselves riding in numbers talking to each other thinking they own the road. Exciting news not, again it’s always abut the money never about residents who have to put up with those inconsiderate two wheeled space helmet idiots.

Vote Up3-10Vote Down
JossS
Ohh no, encouraging more cyclists to the island is the equivalent of sticking pins in your head, the roads aren’t good enough nor can they cope with any additional influx of those self-centred, I own the whole road, micra-wearing, toff numpties. This will now only make it a hundred times worse as we get infested with cyclists over the coming years meaning all residents can do is… Read more »
Vote Up8-25Vote Down
Sally Perry

“toff numpties” Is this really necessary?