The years-long practice of selling Isle of Wight Festival tickets on Wightbay has been brought to a sudden halt today. 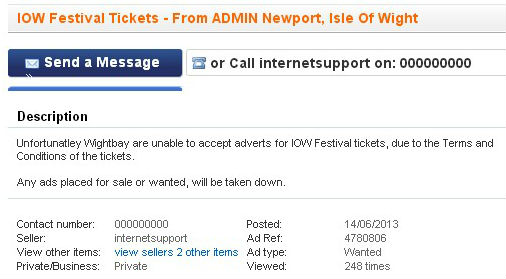 For as long as Wightbay has been around, the buying and selling of Isle of Wight Festival tickets on there has been a regular event.

Today that has been brought to an abrupt halt.

Lots in the past
Many an Islander regales tales of huge amount of money that they’ve made buying tickets early and then making a killing in the weeks before the Festival, selling them to those desperate to go.

This year, that demand for tickets appears to have dropped away, with Festival tickets selling through official channels for less than half price just the week before this year’s event.

Banned on Wightbay
The unexpected news from today is that WightBay have banned the sale of Isle of Wight Festival tickets, adding a message

Unfortunatley Wightbay are unable to accept adverts for IOW Festival tickets, due to the Terms and Conditions of the tickets.

Any ads placed for sale or wanted, will be taken down.

Wightbay say …
We contacted Wightbay asking, “When did [IW Festival] contact you asking you to do this? We don’t recall this happening before, has it?” They replied with the following:-

It is very difficult for our staff to ensure that tickets to any events are sold at no more than face value, and prevent fraudulent ticket sellers.

These scams are very common on the Internet as you can appreciate, and to a high profile event such as the Isle of Wight festival even more so.

We made the decision not to allow sales of these tickets via our website, due partly to previous years experience with the high number of fraudulent adverts for tickets, and partly due to the Terms and Conditions of the tickets which can be found here.

Terms 2 and 4 specifically state that tickets are not to be transferred at all to any third party.

In previous years we have attempted to prevent sales of these tickets via our site, but this year we have also removed wanted ads, as these can attract the ticket touts.

How many tickets have actually been sold?
Rumours of low ticket sales have been doing the rounds on the Social networks.

Earlier today we asked IW Festival for the official number of ticket sales this year. As spokesperson replied:-

We don’t confirm numbers of sold tickets, we are expecting up to 50,000 at the Festival.

When prompted (twice), they wouldn’t clarify how many of these tickets have been sold, and how many were issued to those working or volunteering at the Festival, or indeed a more accurate number than an ‘up to’ figure.

I thought the statement from Wightbay, which isn’t an IW company, made it clear?

You’re right – thanks. We’d left that second sentence in the summary, from a draft when we hadn’t heard back from Wightbay. Now removed.

And remember, this year he is trying to get a return on his car park investment – it’s £20 per car to park. Used to be free.

It’s looking likely the lack of organisational skills and contingency planning from the professionals last year, coupled with JG’s attitude, have inadvertently gelled the solution to the gridlock problems by deterring many festival goers from even attending. What goes around comes around

I wonder how much IW Radio are getting paid for plugging the event ALL day EVERY day.

Vote Up00Vote Down
DH
This just in from the ticket booths on site at the festival. http://www.youtube.com/watch?v=S8H2FIf1oH4 Wightbay have *always* sold tickets on behalf of those who cannot make the festival for some reason or another. The difference this year is Mr Giddings hasn’t sold enough compare to last year and has many tickets surplus to requirement. You can tell this by the number of people on site this year. I… Read more »
Vote Up00Vote Down
Highway to Hell
Dear Island Residents, Island Roads are pleased to announce that we are now authorised re-sellers for Isle of Wight Festival tickets. This years tickets are FREE to every island resident, even if you do not require them. However, after 7 years, a payment of £250 per year shall be debited from your debit card, for the next 25 years or thereabouts. We, at Island Roads, look forward… Read more »
Vote Up00Vote Down
caulk-ed

It’s obvious the ticket sales are way down, you only have to look at the shuttle buses running half empty. I do believe this is the beginning of the end for the festival. To make it work again you only need to change two things. 1. the location 2. the organiser.

Not to mention car ferry prices…

Ticket sales are so low they tried to sell off at less than half price ,if this is the slow decline and possibly end looming I hope the council don’t get left with sorting out the torn down hedges and roads built on fields when he leaves .
Bestival is thriving and not rocket science why it is …

Its a shame the organisers can’t be truthful with the local businesses, many of whom will have stocked up in anticipation of the apparent expected 50,000 and in fact will now be facing serious overstocking in in an economy where businesses can’t afford these mistakes.

I’m surprised that ticket sales have been underwhelming. I thought the prospect of standing in a sodden industrial estate in Newport watching Bon Jovi would have drawn hundreds of thousands of prospective ticket buyers.

Vote Up00Vote Down
kevin Barclay-Jay
35,000 weekend tickets have been sold…30,000 day tickets have been held back (10,000 a day). For years there has been a call for day tickets…now we get them people claim ticket sales are down. Current estimate for the actual turnout for the festival over the whole weekend is about 5,000 less than last year ..so about 65,000 Day tickets are available on the gate for £80. This… Read more »
Vote Up00Vote Down
ralph

Did the decision to ‘hold back’ 30,000 tickets come before or after it was apparent that they weren’t going to sell?

We don’t confirm whether the decision to ‘hold back’ 30,000 tickets came before or after it was apparent that they weren’t going to sell, we are expecting up to 50,000 at the Festival (we tend to quote a low estimate in order that we can claim an overwhelming success when we exceed it, although if asked we wont confirm or deny that either)

From what kind of source are your figures from, Kevin?

It seems odd that 10K tickets a day would be held back for same-day sale – people dropping by the Island on spec, or calculated for Islanders only? Especially after last year (& today?) when the weather on the day might put people off, instead of paying their money safely (from Solo’s point of view) in advance.

I would have thought that offering Islanders day tickets but payable in advance, would have been a more likely Solo response to any requests there have been for day tickets – assuming this was indeed a priority for Solo as Kevin implies.

Drove past the site at 16.00 ish and that’s the quietest I have ever seen it. Even the camp site seems less crowded. I’m not sure where the £80 figures appear from….. I was told from a worker there that £30 is more likely later on. But whatever the overwhelming impression is that the numbers are significantly reduced. What comes around etc etc

I’ve met people of all ages who enjoy the festival, including a man of 70 tonight who’s been thrilled by the atmosphere on the site…

Figured out why it’s quiet on the festival site, they are all outside the William Coppin supping cheap booze

Vote Up00Vote Down
caulk-ed
Thought of the week! John Giddings receives £1 for every passenger that uses southern vectis. As a taxi driver I was shocked that the amount of people coming to the school lane taxi rank was next to zero. I was then informed that the decision was taken to divert festie goers to the bus exit ??? apparently people were not allowed to leave via the main exit.… Read more »
Vote Up00Vote Down
fatheroporridge
Have to agree that its spookily quiet around newport this year. Only one car ferry from e cowes fully booked up for monday suggests a lot less cars coming over and no surprise after last year’s fiasco. I think Mr Giddens attitude may have been a big nail in the coffin of the Isle of Wight Festival which looks like it will cease to continue to be… Read more »
Vote Up00Vote Down
Paleo

Morison’s still stacked to the Gunwales with festi stuff on Sunday afternoon, Newport a Ghost Town (cue Specials for those of a certain age)

They stayed on site mainly to avoid paying £6.00 for a bus ride. Greed sheer greed.

Ticket sales were also banned on the Isle of Wight festival forum, but they didn’t stop the touts buying and selling tickets down the road from the festival.