Young Islanders were not deterred by Cllr Hobart’s announcement that Isle of Wight council will not declare a climate emergency. They showed their feelings after school outside County Hall last week. 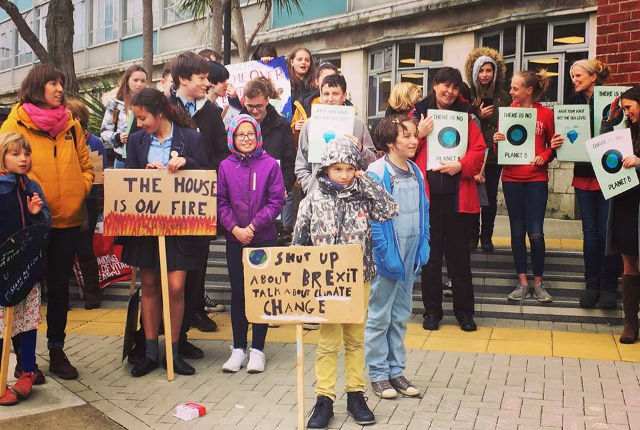 More than 70 Islanders, including 40 schoolchildren, gathered outside County Hall on Friday to protest against climate change.

However, the Isle of Wight Council has said it will not declare a climate emergency.

Call for ‘climate justice’
Among the protestors were the school council from the Bay CE School, accompanied by their headteacher.

“What do we want? Climate justice! When do we want it? Now!” Mathilda (pictured above), 11, from Niton, said:

“I feel governments aren’t doing enough about climate change, and we need to unite as young people and do as much as we can.

However, cabinet member for environment and heritage, Cllr John Hobart, said there were no plans to follow suit on the Isle of Wight. Hobart: Lead the way without creating a panic
Cllr Hobart said the council had other priorities and was already involved in a number of initiatives to help the climate.

“We are working extremely hard within our budget. It’s up to us to lead the way without creating a panic amongst our children.”

However, Cllr Hobart said he preferred speaking to children in schools, rather than protesting, adding,

“They have some fantastic ideas of what we should do, I would rather be in the schools.”

“This was part of the second UK Youth Strike 4 Climate, which was inspired by Greta Thunberg and the Fridays For Future campaign.

“The action was facilitated by XRIW to give concerned youth on the Island an opportunity to be heard and express their concern in light of the climate emergency.

“The science is beyond doubt and the time for denial is over. It is time for government agencies to rise to the challenges ahead and listen to the will of the people.”

Clearly the children did the homework and Cllr. Hobart hasn’t.

Vote Up21-6Vote Down
saveenergy
Steve, clearly you didn’t do the homework Climate is the average of weather. We are wet, mild, south-westerlies -that is our climate.  It has been our climate for the last 10k years and is the result of our geographical ( & geological) position on the planet.  We have had climate changes due to advancing and retreating ice ages, but right now we are interglacial and stable.  The… Read more »
Vote Up2-8Vote Down
saveenergy
(school council from the Bay CE School, accompanied by their headteacher. The group chanted: “What do we want? Climate justice! When do we want it? Now!” ) The headteacher should be in school teaching the scientific method, maths & physics; not encouraging senseless demands. Shame about the children – Young lions…led by donkeys I never cease to be amazed by the pomposity & arrogance of people who… Read more »
Vote Up5-14Vote Down
Steve Goodman
And I encourage senseless scientifically ignorant politicians and OTW posters to learn more about what is well beyond reasonable doubt on the subject of the suicidal consequences of historic and continuing human harm to our climate and wider environment. It’s a shame about the lions led by donkeys, and some people’s amazing pomposity & arrogance, but following Friday’s worldwide students climate crisis protest environment secretary Michael Gove… Read more »
Vote Up12-8Vote Down
Colin

Steve, with respect, it is unwise to attach too much credibility to anything Gove says. He is a politician of the worst kind. And like brexit there are many, often opposing views; calling OTW posters ignorant dowsn’t help your cause just because they hold a view different to your own.