The Head Master said this year marks the end of a period of significant change at A-Level which makes many of these achievements, the combined work of pupils and staff, the more impressive. 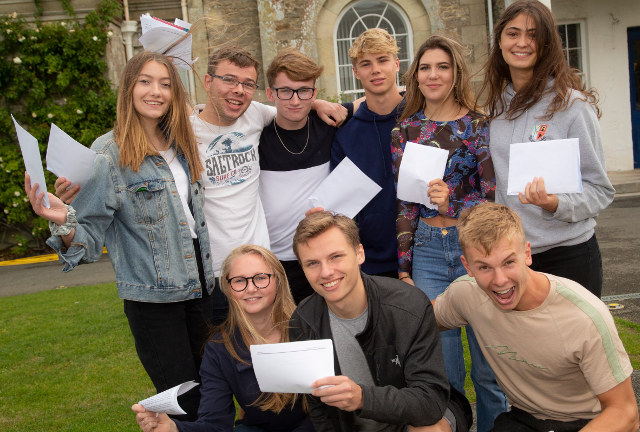 Today (Thursday) saw the publication of A Level results and so the final exam results for our Sixth Form leavers following IB and BTEC results earlier in the summer.

As all subjects are now part of the tougher new A Level structure we were pleased to see 25% of A Levels being graded A* or A, 50% of the Higher Level IB Grades at the equivalent (6 or 7) and 90% of our BTEC candidates achieving a double distinction or above (something 34% of candidates achieved nationally last year).

High achieving girls
Particular congratulations go to two high achieving girls securing places to read Maths at Bath and Nottingham: Annabel Luke of Ryde whose A* in Maths was complemented by A grades in Further Maths, Physics, Chemistry and the Extended Project and Joanna Orlik from Whippingham who received two A* grades for Maths and Art, alongside A grades in French and Further Maths.

Joss and Sophie are amongst several other students gaining at least two A grades at A Level including Rose Hosein and Vinnie Murphy from Ryde, Georgia Gibbs from Bembridge, Simon Lock of Shanklin, Ventnor’s Sophie Sieger, Ben Woodford of Seaview and Hong Kong boarder Felix Lau.

Onward journey
They leave to study a variety of courses including English at Bristol, Psychology at Bath, Design in London and Chemistry at Durham. Five students following the IB Diploma achieved the equivalent outcome, grades 6 or 7 at Higher Level, including Pip Andrews of Seaview and Freshwater’s Lauren Bromley who achieved an impressive 41 and 40 points respectively (out of a maximum of 45) putting them in the very highest cohort internationally.

Other success stories
All students taking the IBCP, a qualification which Ryde School was the first independent school to introduce and which combines academic and applied qualifications, secured high passes. Pupils celebrating include one gaining the maximum marks in his Sport BTEC, whilst success for Ariela Richardson from Ventnor means she will study Radiography in Birmingham.

This is the final year of A Level reforms, so all A Level students have now sat the new exams and many do a combination of A Level and other qualifications.

Taking A Level, IBCP and IB Diploma results together, the average UCAS points per student at Ryde is 138.5 which in the old system would be the equivalent to AAB at A Level.

Waldron: Supporting students our priority
Mark Waldron, Head Master, paid tribute to the continuing hard work and determination of both staff and pupils;

“Our priority over the next few days is to support our students as they negotiate the next stages of their career and consider the exciting and varied opportunities ahead.

“We celebrate, of course, those who have achieved the very top grades in their subjects, but also those quiet triumphs of individuals for whom exams do not come naturally but have given their very best and have much to be pleased with today.

“This year marks the end of a period of significant change at A Level which makes many of these achievements, the combined work of pupils and staff, the more impressive.”

Lovely to see these success stories, well done young people of Ryde School! It’s interesting that the A*/A rate is 25%, which is exactly the same as the national rate (JCQ figures); let’s hope the overall picture for the school has some positives to help it promote itself.