Are you related to one of the three Isle of Wight suffragists?

Three women from the Isle of Wight signed the 1866 Women’s Suffrage Petition, the first mass Votes for Women Petition submitted to Parliament. Hannah Griffiths is keen to see whether any readers can help fill in the gaps of her research. 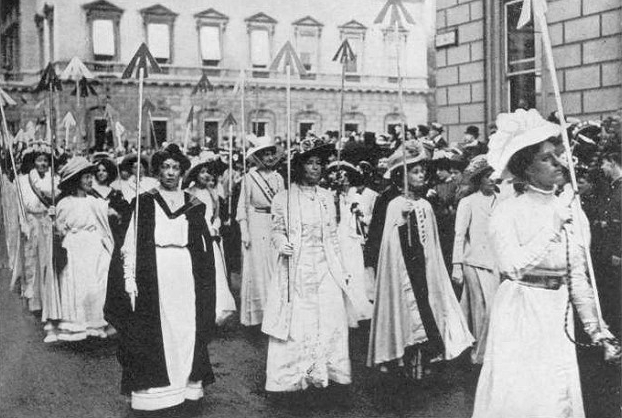 Hannah Griffiths from the Sudni Heritage Blog shares this fascinating insight into Early Suffragists on the Isle of Wight.

Perhaps you are related to one of the three women who signed the 1866 Women’s Suffrage Petition and know more about their history. Ed

7th June 1866 – 150 years ago, John Stuart Mill presented a petition to Parliament signed by some 1521 people, submitted by Emily Davies and Elizabeth Garrett. This was the 1866 Women’s Suffrage Petition, the first mass Votes for Women Petition submitted to Parliament. There were many more to come and a long fight ahead for the women (and men) involved in fighting for women’s suffrage.

It was a pretty rubbish time to be a woman (in modern terms), you were still owned by your father until you married and then you became your husband’s possession. The men in your life would have control of your money, your children and everything in your life.

I need a whole other article or two to go into this, so I’ll be back with more on this at a later date.

You can see that in the growing mill towns people would go from neighbour to neighbour, but how did the petition reach these women on the Isle of Wight? Perhaps through the Island’s artistic circles? That is what I am trying to find out!

I have been able to find some information on Ellen Cantelo – she was an artist and it would appear, fairly successful as she left £253 in her will after she passed away in 1898 – before the suffrage fight really began to take hold.

The money was left to Elizabeth Thompson (the same lady who signed the petition? perhaps her sister?). As for the other women, they both remain somewhat a mystery, but it’s still early days for researching.

Can you help fill the gaps?
I’m fascinated by these women, living in Newport in the 1860s, being involved in women’s rights and perhaps facing prejudice or taunts for being a woman with an opinion and I am excited to find out where things went from here. If you can fill in any of the gaps, please let me know.

To find out more about the petition and to look who signed it you can download the signatories.

Image: juliejordanscott under CC BY 2.0

7 Comments on "Are you related to one of the three Isle of Wight suffragists?"

newest oldest most voted
nico
No wonder you’re fascinated Hannah, these women sound really intriguing. Good for you to get on their trail! Even coming to the island about 15 years ago one of the first questions from older people was assuming I would have a husband, which I’m now connecting up as a vestigial remain from expectations that women would be ‘owned’! With the stereotype that we are a dull, stuck-in-the-past… Read more »
Vote Up00Vote Down
tiki

Contact the Isle of Wight Family History Society. There are a couple of people researching the Cantelo family. Good luck. Sounds fascinating.

Looking forward to hearing more about these ladies well done

Vote Up00Vote Down
ju3i
From a ten minute search of the internet, it appears that Ellen Cantelo (nee Cass) probably was a sister of Elizabeth Thomas (nee Cass). In the 1881 census (aged 55) Ellen is listed as ‘Artist in oil paintings’. On the Suffolk Painters website it suggests that Fanny Minns (1847-1929) received painting lessons from Ellen Cantelo (1825-1898). On page 168 of a book, “The Women’s Suffrage Movement in… Read more »
Vote Up00Vote Down
Sally Perry

Ellen’s great, great, great nephew has been in touch, so we’ll soon find out whether she had any involvement in the movement subsequent to signing the petition.

Vote Up00Vote Down
Suona
I hope we learn more — while the work of the suffrage movement leaders is well known, it is interesting to read about the rank and file. By the way, it was a long, long struggle. The arrows some of the women are carrying signify that they have been in prison, which dates the picture to 1905 or later. It is a WSPU march, and you can… Read more »
Vote Up00Vote Down