The occupiers say they have no wish to damage or disturb the building, instead they intend to preserve the cultural heritage of this almost 200-year-old building, once frequented by the likes of Lewis Carroll, Charles Darwin and Count Stroganov 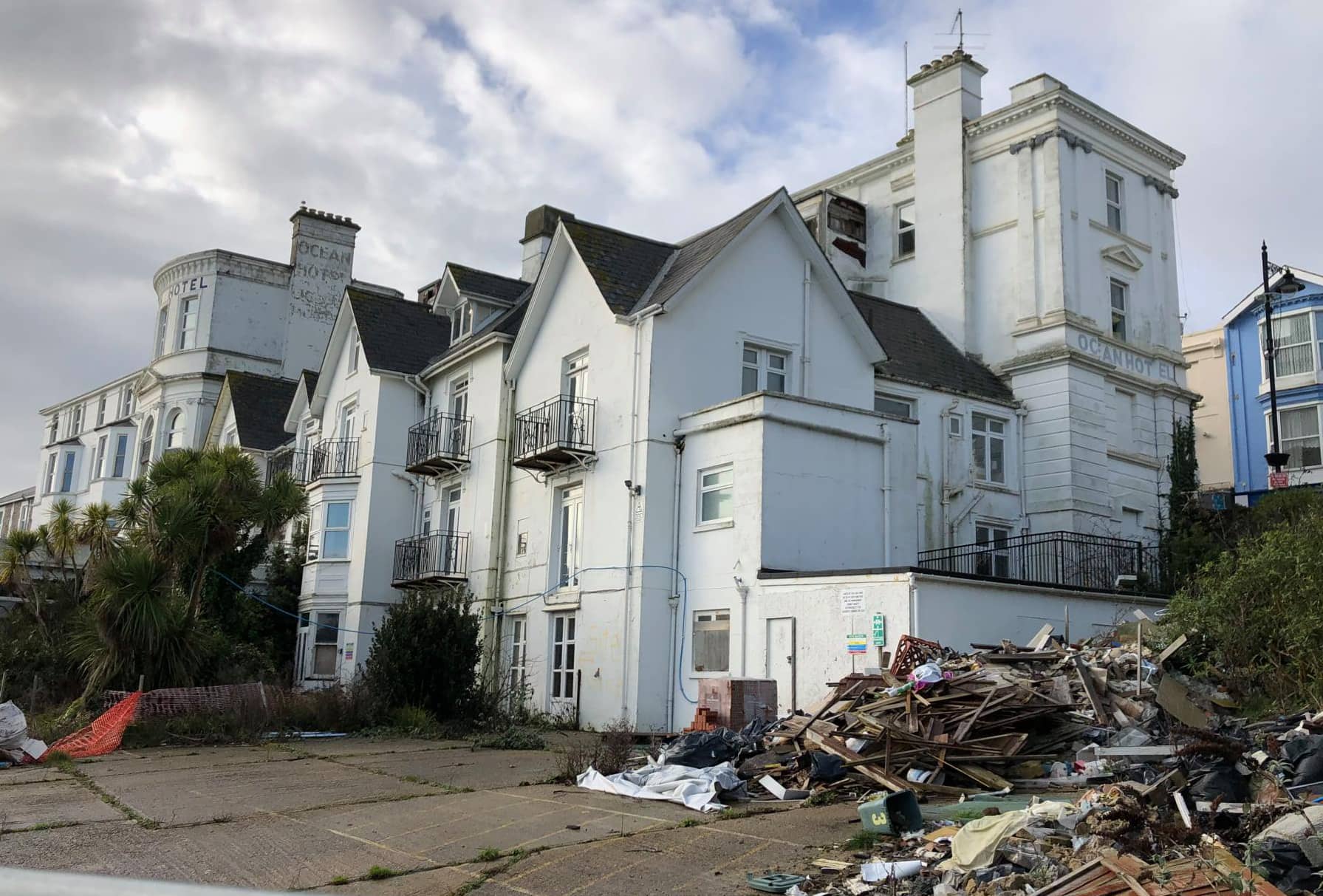 A group of people referring to themselves as ‘The Nutters Productions, Historical Preservation Society Branch’ are claiming the legal right to live in the derelict Ocean Hotel in Sandown and have issued legal warnings to anyone choosing to enter the commercial property.

After the Carlauren Group went into administration at the end of 2019, Sandown was left blighted by the unfinished renovation of The Ocean Hotel and King’s House.

Squatting The King’s Head
The occupiers have set up on the top floor of The King’s Head, the gabled section of Ocean Hotel, which they say became the favored residence on the Isle of Wight for Victorian author, Lewis Carroll.

The purpose of the occupation is to draw attention to the heritage of the former hotel.

“We want to preserve the history of The Ocean Hotel and attempt to clean up the shocking mess that has been left on the site. No visible restoration work has been done to the property since it was sold to Carlauren. The likelihood now is that ‘The Ocean’ could be left to decay for years to come before anything is done.

“Without the millions of pounds to invest ourselves, we decided this is how we can best attempt to save this beautiful and historical building.”

Occupiers: “No wish to cause any disturbance or damage”
The squatters urge residents in the town to support them by letting them continue their occupation in peace. They say their only interest is in preserving this important part of the town’s history.

“With a notable past that is both important and beautiful, this hotel should be a priority to anyone interested in the preservation of the Isle of Wight’s history and connections.

“The way it has been left to degrade in the manner it has is a scandal. The risks of the elements, strange fires, vandals and general decay is too great to ignore anymore. We wish to raise awareness of the situation as well as try to save what we can to the best of our abilities.

“Our group has no wish to cause any disturbance or damage regarding the building or trouble for the town of Sandown, If anyone would like to contact us with ideas or information, please feel free to. If you see any of our people on the site, the best way to support us is to be kind and courteous and let us continue in peace.”

Steeped in rich history
The occupiers have had an interest in history of the property for many years. Indeed, they filmed inside the hotel before it was vacated by the previous owners. Nutters Productions say,

“We filmed the property during its last week open for the Conway family who owned the building before the Carlauren Group bought it. We were there on its final night and they asked us back a few days later when they were packing, to kindly gift to us some incredibly beautiful guest ledgers from the hotel’s past.

“Part of the building was built before 1806 (appearing as ‘King’s Head Inn Sandham’ in the national archives) on land that was still then in the hands of the Wilkes family of the famed John Wilkes who lived at the high streets first premises ‘Sandham cottage’. By the mid-1830s, King’s Head had grown into a highly notable hotel, the first in Sandown with a grand staircase, accessed mid-way up from the high street level.

“For a hotel like this that is coming up to 200 years old, it is a shocking oversight that it hasn’t been listed and protected already. The original brickwork of the exterior of the King’s Head wing is beneath layers of plaster and paint. I think people would be pleasantly surprised to view it in its original glory if this were stripped back. With time and care, we believe this is entirely possible.”

‘On the Origin of Species
The Nutters Productions go on to explain the history further, saying,

“It was in 1858 that Charles Darwin arrived, fleeing an epidemic of scarlet fever with his family that had swept through his village. Bringing with him notebooks from which he would build his abstract that became ‘On the Origin of Species’. These notebooks made world headlines recently as they were discovered to have been stolen from Cambridge library and are possibly now lost for good.

“Like the effect on world language that Carroll’s work had, Darwin’s theory of evolution changed the world of science forever. As the population grows and hundreds of years pass by, more and more people will want to know what it was that they observed.

“The King’s Head will always be tied to the roots of both their works and when people ask of the origins of ‘Origin of Species’ it would be a tragedy if our generation was remembered as the shortsighted ones that destroyed it.”

Strauss, Munn and Stroganov
As well as Darwin and Carroll, the Group also say the Hotel was occupied other famous and important figures,

“The Ocean Hotel has ties to many names, with composer Richard Strauss staying there in 1902 and 1903, and Billy Munn, the Jazz musician whose music was used in the Bethesda Fallout games. In 1873 Carroll met Count Graf Sergey Alexandrovich Stroganov who would become the last representative of his family of highly successful Russian merchants, industrialists, landowners, and statesmen.

“The Stroganov family has a grand history, from the reign of Ivan the Terrible in the 16th century they were the richest businessmen in the Tsardom of Russia. Peter the Great elevated the Stroganovs into the nobility as Barons of the Russian Empire and the family owns the lavish Stroganoff Palace in St Petersburg.”

The Nutters Productions finish with this message for anyone who ever worked at on on the buildings.

“So, for anyone who put effort into this building over the last 200 years, be it they polished a door handle, painted a skirting board and stood back proud of their work, or simply watched the rain out the window on a forgotten holiday long ago, we simply want to protect our Island’s fading history and splendor for them and all of us before it’s too late.”

Our thanks to Paul Coueslant from Sandown Hub for his support and use of photos.

newest oldest most voted
Benny C
No one condones illegal or anti-social behaviour, instances of childish stupidity is just a depressingly frequent fact of life, but surely the bigger issue here is that this is what happens when terrible local councils fail in their duties to secure growth, long term future prospects via a strong, well thought through strategy. Sandown council are hopeless, as witnessed on recordings, failed projects and the general neglected… Read more »
Vote Up58-4Vote Down
Steve Goodman
“Motionless, inactive and apparently without a care in the world” Ian and his associates certainly didn’t deliver in the similar case of the Grade II Listed former Frank James Memorial Hospital, which the council had a duty to protect, but which was neglected for a decade before being rescued by more responsible residents who took control of the site and worked on it for five years –… Read more »
Vote Up470Vote Down
hialtitude
Well why not, I read fairly recently about the destruction visited upon the Ryde Theatre, so this can only be a good thing. There are too many unoccupied buildings and too little affordable accommodation for Islanders so good luck to them. Perhaps when the repairs are complete the spaces could be rented out housing association style, pretty sure lots of people would love to live in such… Read more »
Vote Up48-7Vote Down
Benny C
That’s a great point. Why couldn’t the building be recommissioned even if temporarily while a permanent solution is found? It’s been empty so long that the cost of resuming beneficial use might have been recouped by now. I wish the rates legislation trebled the impact on owners of empty buildings (with effective mechanisms to prevent scams operating whereby someone’s aunties nephews gerbil is lashed to the entrance… Read more »
Vote Up23-1Vote Down
beacher
Benny C On what planet is this. Its privately owned ( by a company in administration) with upwards of 60 leaseholders …they and any eventual purchaser are the only ones who can say what happens (except planning permission when / if it gets to that point/) thinking that the council can change that is pie in the sky ( many Sandonians wish that wasn’t the case..) but… Read more »
Vote Up7-13Vote Down
Mark L Francis
“60 leaseholders and a company in liquidation” is apparently the reason why the building is currently in such a derelict state and why somebody – preferably the Council, but if not then activists need to get a grip on the matter. Either that or the mysterious fires that break out periodically along Sandown seafront. Any court order should not be against the squatters but a compulsory purchase… Read more »
Vote Up28-1Vote Down
Steve Goodman

Where is the sense in failing to maintain and use existing buildings and continuing to destroy valuable farmland and other open space for new build?

Vote Up70Vote Down
snowwolf1
Through good investment I would have thought these beautiful buildings would have been beneficial to not only Sandown but the Island as a whole regarding tourism which is going to be more in demand with the covid threat still threatening the race world wide. Please do not be so short sighted – see the bigger picture rather than the negativity of thought and quick profit making. Good… Read more »
Vote Up240Vote Down
Jane

Don’t the Isle of Wight Council have a compulsort purchase order on this Hotel?