Dinosaur Island app: Get it here

Here’s the links to the Dinosaur Island app and to the OnTheWight guide to the sites around the Isle of Wight. 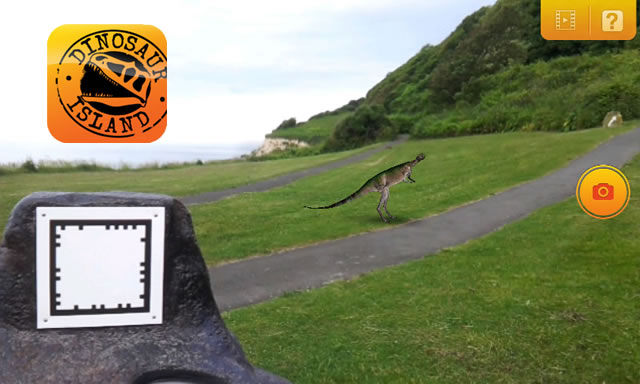 The Dinosaur Island app is available for some Apple iOS and Android devices. Best follow our links below, as there are a couple of apps with similar names that might cause confusion.

With it, while you’re at one of the six sites around the Isle of Wight (details below), you can ‘bring a dinosaur to life’ have have it wandering/flying around, superimposed on the landscape, with the roar or skreech of the animal coming out of the speakers.

A photo can be taken and then you can email that photo to family or a friend, or send it out on Twitter, or Facebook.

Dinosaur Island App trail guide
OnTheWight has prepared a guide to all six sites on the Isle of Wight that have the meteorites:-

Download the app here
It runs on two operating systems.

Android
Minimum requirement is Android 3+.
The support of the widely-owned Samsung Galaxy S2 has been dropped in the last day or so, since we tested it at the start of the week.

5 Comments on "Dinosaur Island app: Get it here"

newest oldest most voted
mittromneylovesiow
My phone isn’t new enough to support the app. I think we should install more of these meteors in non tourist locations so the locals can have their picture taken with dinosaurs. My suggestions are:- Outside KFC Newport – have your picture taken with a dinosaur that’s just queued for 3 hours to get a bargain bucket. In the Co-op post office counter – again queuing for… Read more »
Vote Up00Vote Down
Chris O'Brien

Feedback, BAD, can’t even install on an HTC Desire S, they want Android 3 or above. My 3 yr old daughter will be most upset that she cant see dinosaurs on daddy’s phone.

More BAD feedback, after updating my HTC Desire S to android 4, I still can’t install the app, friggin useless, get with it developers.

Soo its not just me at Newport KFC then.

‘App’arently not, Mark. You and the dinos are satisfying your ‘app’etites together…[That’s enough apps – Ed]

I can no longer see the App on Google App site