Christine says the mood among the packed audience was one of disbelief, dismay, shock, anger and sadness after the screening and talk about the abolition of the NHS. 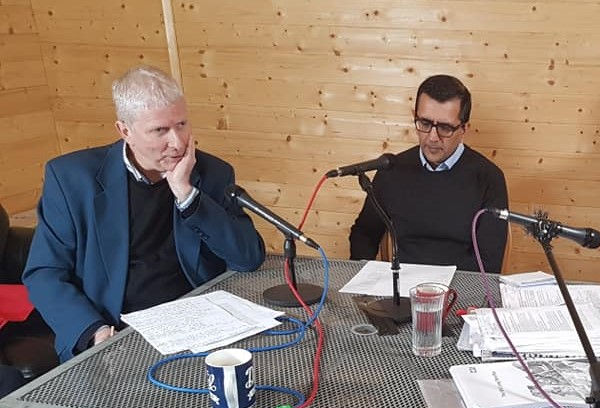 Christine Lightbody from IOW Save Our NHS Group shares this report from last week’s event. Ed

On Saturday 28th September IOW Save Our NHS welcomed visiting guest speakers Dr Bob Gill and Dr Paul Hobday to the public screening of Peter Bach’s film, “Sell Off – The Abolition of Our NHS”.

The film provides indisputable evidence of  how, over the last 30 years there has been a sustained undercover attack on our NHS with the long-term goal of privatising it.

Many years ago, Margaret Thatcher gave the instruction that, “Privatisation of the NHS should be carried out by stealth and in ‘salami slices’ because if they (that’s us) got wind of it, they (that’s us again) wouldn’t stand for it!” And that is exactly what has been happening despite the propaganda being fed to the public that insists on the lie that the NHS is in safe hands and will never be sold off.

Engineered attack
After the film, retired GP and author of “The Deceipt Syndrome”, Dr Paul Hobday, took the audience back through history with an astonishing factual account of how the attack on our most treasured public service has been engineered by consecutive governments for decades.

By identifying many of those complicit in the ‘plot’ and referencing past Government Legislation including the Health and Social Care Act 2012, which effectively abolished the NHS, he validated his claims so that there was no doubt as to their validity.

He spoke in detail, giving working examples of what’s happening to our NHS, the ongoing struggle to provide proper care and the effects on both patients and the work force.

He explained how more and more restrictions continue to erode the provision of services and how theses are being being developed and implemented behind a cloak of secrecy without parliamentary scrutiny or proper public consultation.

He explained how NHS England’s CEO Simon Stevens worked for many years for the global Insurance company UnitedHealth Group of America and how, since 2014 he has become the main orchestrator of the plans to fragment and dismantle the NHS supported by pro-privatisation politicians and MPs many of whom also have interests in private health care.

IOW Save OUR NHS will provide further details when it has been studied and analysed.

Profit will come before people, health rationing would become the norm for those who cannot afford to pay and many will die.

Lively Q&A session
To conclude the evening, there was a Q&A session. The mood in the room amongst the packed audience was one of disbelief, dismay, shock, anger and sadness that our NHS is being dismantled bit by bit and that we, the public are being misled and deceived by government and much of the main stream media and press. After the event one lady wrote:

“Went to this last night. Came away very saddened and shocked at what’s going on with  our NHS. Knew it was bad but this really got to the heart of it.

“Thank you IOW Save Our NHS for organising such a great event.”

The audience vowed to spread  the word and voted unanimously in favour of the motion that,

“This public meeting opposes the privatisation, outsourcing, cuts and closures off our NHS and calls upon the CCG (Clinical Commissioning group) and elected officials to actively oppose and reverse them.”

Watch speeches and Q&A
Derek Farrell filmed the doctors speaking and the Q&A for anyone who would like to see it. Around One hour and 20 minutess in length it has been posted in five parts all of which can be accessed here:

The film “Sell Off” can also be viewed here via YouTube.

newest oldest most voted
lifewriterbutmainlybeer
I attended what turned out to be a fascinating and enlightening presentation. The methodical dismantling of the NHS is something, perhaps, that we are all aware of, yet may not quite believe is really happening. Personally, I am aware that I get unsolicited mail with the NHS logo printed on it, offering me ‘queue-jumping’ of the waiting list, should I need it. Is that from the NHS,… Read more »
Vote Up33-6Vote Down
Alternative Perspective

I would urge readers to watch and listen carefully to the video.

If you genuinely care about our NHS then the only course of action is to use, and encourage your friend and family to use, their vote in the ballot box.

An interesting article from the Independent. It’s from 2015 but still pertinent.

How the NHS is being dismantled in 10 easy steps:

Another example of Tory policy, make sure to vote them out next time around

Vote Up40Vote Down
wellsm
” current government policy to privatise our NHS”. This is bad as the antivax campaign for misinformation. No government or party aspiring to govern in this country is going to privatise the NHS. The NHS does offer private patient surgery etc, it has always done so and the proceeds benefit the relevant NHS Trust. I know this because I had a heart procedure (angiogram) paid for by… Read more »
Vote Up15-27Vote Down
minnieb

Why on earth would any sane person want to save this inefficient third world service where you are treated like long suffering cattle; that’s when you can eventually get an appointment. Healthcare is so much better and ultimately more cost efficient in other countries such as France, Spain, Germany even little Cyprus. Abolition? Bring it on!

Vote Up7-22Vote Down
hialtitude
My dog cut her paw open on a sharp rock or maybe a bit of glass on the beach, it bled profusely, she had it treated at my local vet, they washed and cleaned it and gave me some antiseptic to use twice daily. The bill was around £70. Imagine the cost if you or a family member had cancer or another life threatening ailment and require… Read more »
Vote Up15-8Vote Down
Alternative Perspective

Minnie’s that is precisely what they want the public to think, and what this excuse for a Government, and their monied enablers, are driving towards. Their hope is to create a demand for private sector providers, don’t be fooled.