Another batch of unwanted bicycles have set sail from the Isle of Wight – with the help of Wightlink – destined eventually for Africa. 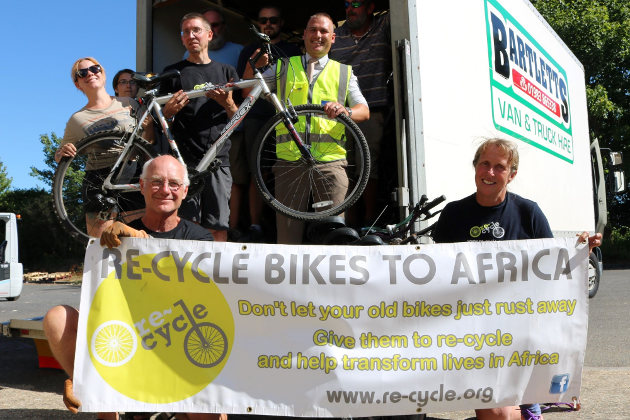 An Isle of Wight charity that collects unwanted bikes and sends them to Africa has received a helping hand from Wightlink.

Re-Cycle Isle of Wight provides bicycles to communities in Africa. They offer people a route out of poverty through work or education by providing cheap and sustainable transport.

Consistent support
For the past eight years, Wightlink has supported the charity by providing cross-Solent travel for a lorry to deliver the bikes to the charity’s national headquarters in Colchester, where they are sorted and refurbished.

To date, more than 1,200 bikes from the Isle of Wight have been sent to Africa via the charity. It’s not only the African communities that benefit from the charity’s work, Re-Cycle also supports people in the UK to learn about cycle maintenance.

Lending a hand
Wightlink’s Head of Port Operations Dean Murphy has visited the Island branch of the charity at its base at InnerSpaces in Cowes.

He helped load the latest batch of around 120 bikes into the lorry donated by Newchurch-based service station, Bartletts, ahead of a 04:00 sailing from Fishbourne on Tuesday 24 July.

“We are really grateful to Wightlink, Bartletts and InnerSpaces for their continued generosity as it means we can send even more bikes to people in Africa who need them.”

“We have been helping Re-Cycle Isle of Wight to transport bikes off the Island for several years. We are delighted to continue our support as we recognise the importance of the charity’s work in providing sustainable transport for people in remote communities in Africa.”

Find out more
The Re-Cycle Isle of Wight team is always happy to accept donations from Islanders and receives approximately seven bikes per week.

For details on how to get involved, please visit the Website.