Climate change campaigners are mobilising in Ryde this coming weekend (6th July) for a further public demonstration of support for action to tackle the Climate Emergency. 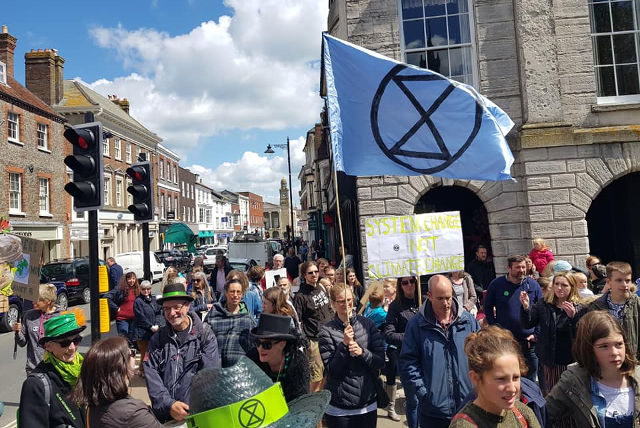 After a week of record temperatures on the continent – with even further evidence of the impact of planetary heating – climate change campaigners are mobilising in Ryde this coming weekend (6th July) for a further public demonstration of support for action to tackle the Climate Emergency.

Extinction Rebellion Isle of Wight have organised successful marches, speeches and petitions to put pressure on the IW Council to declare a Climate Emergency. But for the first time this activity will move from Newport to Ryde, and a new audience to widen the opportunities for greater participation.

Motion for climate emergency declaration
This move comes just days before the Full Council Meeting (24th July), which is set to debate the Isle of Wight Council joining 717 jurisdictions and local governments across the globe which have declared a climate emergency, and to commit to net zero carbon emissions in the next few years.

In Britain, 58% of the population now live in areas which have declared a climate emergency and have taken the first steps towards policies and firm action to protect our planet for generations to come.

XR IW: We must keep pressure on
An Extinction Rebellion spokesperson said,

“In the last six months the world has come a long way on climate change, but we must keep the pressure on locally to ensure that the Isle of Wight does its bit.”

The Isle of Wight relies on the protection and enhancement of our natural environment – only last month we were awarded the title of UNESCO Biosphere Reserve status, plus as an island we are significantly more vulnerable to the consequences of sea-level rise and coastal erosion.

This is overwhelmingly challenged by the scientific community, climate data, environmental experts and the public experience that we are witnessing from Australia to California and France in 2019. But the reality is that at a Full Council meeting it is the votes of all 40 councillors which will have the power to declare the Climate Emergency later this month.

Where and when
Please meet in Ryde, St Thomas Square, from 12.30pm on Saturday 6th July to show the strength of support for our Council to join with the hundreds of other councils across the world. Bring banners, instruments and speeches.

The sunny weather has been glorious though.

Will there be provision for parking at the event, don’t like leaving the range rover on the road.

Excellent. You can start by getting rid of all your electric using devices and chargers and stop travelling round the country and the world.
When you travel to meetings by foot and dump your phones then I might believe you.

Vote Up12-18Vote Down
Benji Smith
“You use the only existing system to benefit yourself.” is not a gotcha moment. I understand your point that they unwillingly have more of a cost on the environment than they would like to. I’m sure you’d be willing to back changes such as better public transport or cutting the emissions of (much more significant) factories, at the expense of taxpayers and the economy, but for the… Read more »
Vote Up16-4Vote Down