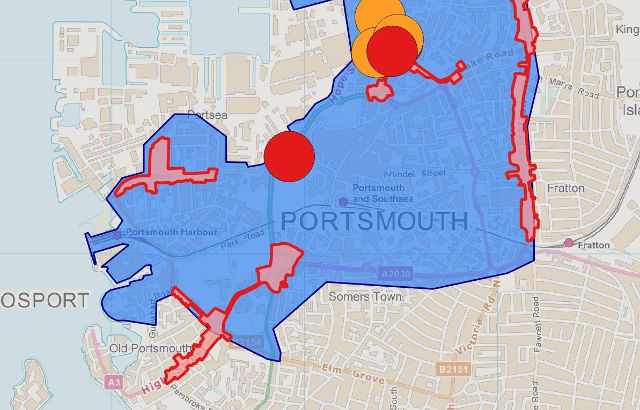 The centre of Portsmouth could become a chargeable clean air zone – rather than the whole of Portsea Island – if new plans are approved, but some are concerned this ‘will not be enough’.

In the latest government-imposed plan to bring pollution levels in Portsmouth down to a ‘safe level’, the council will consider a smaller, targeted zone in the south west of the city.

It comes after modelling conducted by the council showed a reduced zone to the west of London Road would still result in required air quality levels by 2022.

Vehicles going to and from the Wightlink vehicle ferry will have to drive through the chargeable clean air zone.

“It’s tackling what’s needed, it’s tackling the problem areas where the air quality is bad and it’s based on the consultation we had with people and businesses about how it would affect them.

We’ve modelled it on this area and it brings compliance within the shortest possible time.”

Only affects certain vehicles
Preference for a class B zone, which will only affect buses, coaches, heavy goods vehicles (HGVs) and taxis that are not compliant (euro 4 emission petrol vehicles and euro 6 diesel vehicles), still stands.

“My concern already was that the class B zone is not going to be enough to reach compliance.

“There have been examples of class D zones, where all vehicles are affected, in Germany where pollution has gone down a small percentage. That kind of drop still will not be enough for Portsmouth.”

Self-employed taxi driver Matt Cane, who is based in Havant, said:

“My car meets the requirements of the clean air zone but other drivers will end up having to do what has happened in London and just avoid the chargeable zone.

“And I think taxis will find a way to put prices up for customers to incorporate the charge. It will be the same with businesses who will have to raise prices for customers to make up for it.”

Bid for funds to help businesses
If the plan, which has to be submitted to government by 31st October, is approved, Portsmouth will be able to bid for funds from a £220m pot of cash to help any local businesses replace their non-compliant vehicles.

The cost of implementing the zone, including around 80 number plate recognition cameras that will be needed, will be covered in full by the government.

It is thought the clean air zone will be implemented by September 2021 if everything is approved.

Will Isle of Wight businesses get help to replace their non-compliant vehicles through the Portsmouth bid? or do our council have to do something useful and bid for part of this £220 m pot as well? Not that anyone from the council looks at what you and I think but you never know.

How does this Clean Air Zone affect cars with current MOTs? Which all should have, of course. Does it mean current MOTs are not stringent enough to protect health?
How much of the pollution is due to historical pollution from coal fire ashes, and industrial processes such as the power station in Old Portsmouth?

If busses on the Island were cheaper, it might encourage more people to visit without their cars. Public transport shouldn’t be run for profit any more. This would help our neighbours and the residents here a huge amount. Surely the council can see this.

It costs £57 for a family of 5 for unlimited travel by bus for 7 days. Do you really believe that’s more expensive than bringing a car over on the ferry? Or that people look up the bus fares on the Island before deciding whether or not to bring their car?

Vote Up4-1Vote Down
djmixmaster
A lot of the pollution is Portsmouth City Council making, they have Allowed conversion of so many Houses & old pubs into flats, allowed more flats to be built, which creates more vehicles in the city. I would like to know how it will effect local people, doesn’t that mean we have to pay to go in and out of the city? Personally if I had to… Read more »
Vote Up4-4Vote Down