Hundreds of teachers, head teachers, school staff and parents travelled to the Houses of Parliament from all over the country (including the Isle of Wight) to lobby MPs about school funding. 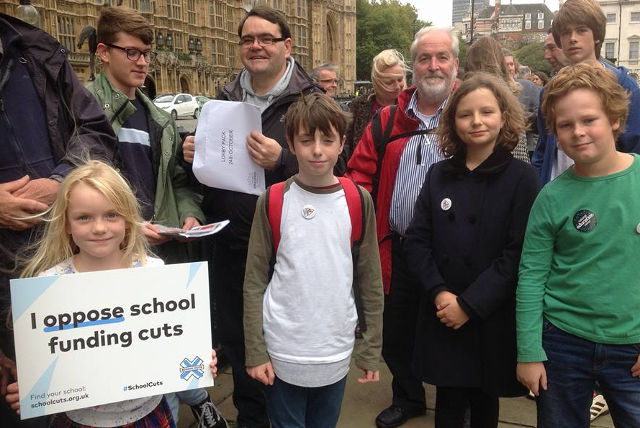 On Tuesday 24th October, hundreds of Teachers, Head Teachers, School Staff and Parents travelled to the Houses of Parliament from all over the country to lobby MPs about school funding. The lobby was organised by the School Cuts coalition of Teaching and Support Staff Unions.

Members of the National Education Union on the Island and Parents from Isle of Wight Save our Schools met Bob Seely MP in the Palace of Westminster.

We welcomed the fact that the new MP listened to our concerns about under-funding – though he seemed not to recognise that there is a significant problem facing Island schools.

He disputed the figures on the Schools Cuts Website preferring to quote a digest provided to him from the Department for Education. He also said he is continuing to work with the Secretary of State to look for additional support for education on the Isle of Wight.

Campaign continues
Both the National Education Union and Isle of Wight Save our Schools will continue to campaign to ensure that children and Schools receive the levels of funding they deserve.

The MP has sent copies of his figures to the Union.

We will be asking Schools to compare those Department figures with ours, so that we can see whose are closer to the truth.

If you have any information about budget increases or cuts at your child’s School, the NEU will be keen to hear from you.