The decision made by the Isle of Wight council Cabinet was called in and debated today. Read News OnTheWight’s comprehensive report 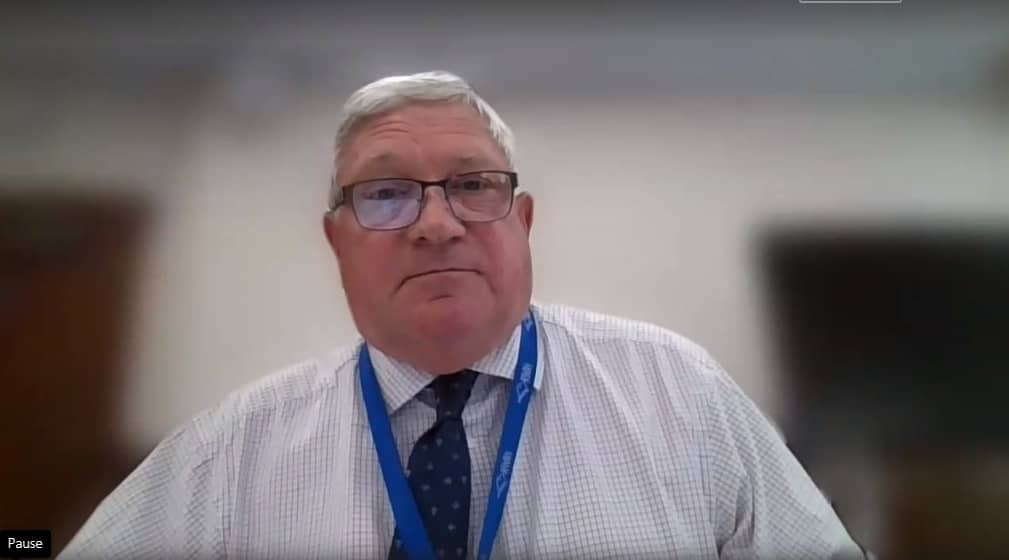 Members of the Isle of Wight Corporate Scrutiny Committee met this afternoon to discuss the call-in of the Cabinet decision on extending the loan term for the £1m investment in Perpetuus Tidal Energy Centre (PTEC).

It was the first meeting for new Chairman of the Committee, Conservative councillor, Richard Hollis.

Cllr Lilley presented the reasons for the call-in, namely that details about the extension to the loan term by another five years which were not presented to the Corporate Scrutiny Committee earlier in the month. Cllr Lilley believes the Committee could have come to a different decision in their recommendation if they’d had the extra detail.

Two motions voted on
After debate of almost an hour, a named vote was taken on recommending the Cabinet “do not change the terms of the existing loan in any way and to continue to have a place on the Board”.

This motion fell by five votes to two (see detail below).

A motion presented by Conservative councillor, Chris Quirk, to support the Cabinet decision was carried with fives votes in favour and two against (see detail below).

The detail
Cllr Lilley said he’d given a comprehensive report to Cllr Hutchinson on his misgivings based on market information on tidal energy, alongside other renewal energy sources such as solar and wind.

He said it was a “brave and good decision to not provide further funding”, but relaxation of the existing loan conditions would, in his view, put the existing public funds lent to PTEC at risk, not protect them.

Cllr Lilley said papers released in 2013 revealed that the IWC would be the first investor to have its loan repaid. He said there is, “no evidence that PTEC would be able to raise further funds, so why change the terms of the existing loan?”

The chief finance officer, Chris Ward, said he was also content that the decision was within the capacity of the Cabinet to make, and that it was in accordance with the IWC’s value for money responsibility and within framework for budget and policy.

He said it was not right for the council to invest the further £244,000 requested, but that if no other investors were found the project would fail.

Stewart: “It has a chance to success”
The leader went on to say that it was his understanding that if two thirds of the council’s shareholding was released to be sold to get through to phase 2a, it would achieve the investment needed, together with the additional recommendation on the loan terms.

However, he said, further investment would be needed to get to phase 2b, adding that by the council taking this action, “it has a chance of success”, and the original aspirations achieved.

“If PTEC continues to have no value, it’s immaterial whether it terminates as the council will not be ab le to recover its £1m investment.

Quirk: No change to recommendation
Cllr Quirk says that with the additional information provided, his position is that he would not have change the recommendation already made.

Andre: Concern about unsecured loan for £1m
Cllr Andre expressed her concern that, having read through the statement from the Section 151 finance officer, this investment was never intended for revenue generation.

She was concerned that the IWC had committed to an unsecured loan for £1m to PTEC and was not convinced that the evidence being asked for had been provided.

Ward: Necessary changes to incentivise alternative investor
Chris Ward replied that proposed changes were to relax the payment date – or extend it – and to relinquish the IWC’s senior debt status, “so it’s on an equal status with the other partner” – ie. being repaid at the same time, on an equal basis.

He said there were necessary changes to incentivise an alternative investor.

Metcalfe: Without extension “unlikely the project will proceed”
Cllr Andre asked whether the IWC still retains guarantor status on the licence.

John Metcalfe, CEO of the council, said the license being referred to was the agreement for the lease. He added that the IWC had an agreement for lease with Crown Estate which expires in March 2021. When PTEC becomes operational the IWC is required to convert the lease it has with the Crown Estate to a lease with PTEC.

Mr Metcalfe said without the continued period of time for PTEC to get its financial package to go beyond March, it’s unlikely the project will proceed.

Hollis: “The potential was phenomenal”
Chairman of the Committee, Cllr Hollis, reminded members that people were very excited about the project in 2013.

“The potential was phenomenal.”

Churchman: “Caught between a rock and a hard place”
Cllr Vanessa Churchman asks whether, “the company would be able to go for EU funding if we allow the shares to be transferred”.

She said they were caught between a rock and a hard place, adding that if Covid-19 was not around they IWC would probably give PTEC the £244,000 requested to get it to the next stage.

“If we don’t support them, what are we in for?”

Lilley: No need to reduce terms and conditions
Cllr Lilley still had several questions to ask. He said if the project is a real financial viability then the minority stake will not deter an investor.

He said there was no need to reduce terms and conditions to get favourability to other investors.

Mr Metcalfe said another shareholder has already added an additional £400k to help the company keep going. He said the IWC would be not having this conversation, but for the fact another company has partnered with another organisation of being able to secure EU funding from the Tiger Fund to help it achieve phase 2a.

Metcalfe: Invest to keep control
He added that if the IWC still wanted to have control over the company they would have to invest £244,000, retain shareholding at current level, keep a seat on the board, but would still have to extend the loan term as it ends in May 2022.

Cllr Lilley said the confidential document that was attached to the report states that before IWC makes a funding decision it should request more clarity from PTEC. He asked whether that had been received.

The Chairman and leader both interjected saying words should not be quoted from the confidential document.

CEO satisfied
The CEO said they had written confirmation from PTEC that the funds would be available subject to additional recommendation agreed by the cabinet, which was option E.

Cllr Quirk said he thinks it’s been debated and moved to support the decision of Cabinet.

“That’s why the shares aren’t really material at this stage of the game. If we pull out and they haven’t got the shares, they won’t be able to continue anyway.”

Lilley: “No concrete evidence shown”
Cllr Lilley said he did not support fully the additional recommendation made by Cabinet about extending the terms of the loan, because there was,

“No concrete evidence shown to the IWC that PTEC will be able to raise the funds, so why give away current terms and conditions, until there are clear funds on the table?”

He went on to add there were “too many uncertainties” and questioned the benefit to the Isle of Wight community, “which is unconvincing”.

“Cabinet to not change the terms of the existing loan in any way and to continue to have a place on the Board until an independent report provides evidence of investment that require changes to existing arrangements and these were clearly of benefit to IWC and residents in ensuring the loan is secure, will be repaid and IW interests are protected and promised benefits are realised.”

Named voting
The motion was seconded by Cllr Andre and a named vote was taken. The motion fell five votes against to two in favour.

Cllr Quirk proposed they support the decision of Cabinet made last week. This was Seconded by Cllr Churchman. The motion was carried with five votes in favour and two against.

How can this even be called a Scrutiny Committee?
With a Conservative Chairman, 4 Conservative Members and 1 that used to be (and still votes with them all) this is not scrutiny at all.
Just what is the point???

Just get rid of these secretive CONservatives in the forthcoming Council Elections.

Even the Houses of Parliament are not that bent as to always have a chair of an important select committee from the same party as government.

These jokers in out IW Council needed to be gone.

Sadly the report as presented did not make it clear the benefit of this huge investment to the Council tax payer. Someone somewhere will benefit/has benefitted to the tune of £1M already. How has the money been spent?– in words of one syllable please.

Shock news! Tory-controlled Corporate Scrutiny Committee endorses the Tory Cabinet’s decision by 5 votes (all the Tories, except the new Chair who did not vote, plus an ex-Tory) to 2.

N.B. You need to keep up with Cllr Lilley’s moves for personal advancement! He has been a member of the ‘Island Indy’ group since last March.

That’s been inaccurate for months.

I see David Pugh is still in charge of County Hall and the muppets are doing as they are told. Not their money is it, so why should they care.

Sad to wish life away but I can’t wait to get rid of this lot. Roll on next year’s elections.

I see Cllr Churchman is on the ball as always, asking if they can go to the EU for funding…

Vote Up190Vote Down
colinteller
Vote Tory Get Banged. Unless you own multiple properties and register them for Small Business Rate Relief – then not only do you pay no local tax at all, this year you received £10,000 per property from the council tax payer (the ones who pay to have your bins taken away, streets cleaned etc). Cushty! No wonder the council is skint and chasing down the poorest islanders… Read more »
Vote Up130Vote Down
Colin
No-one seems to have asked the question as to how the, er, “loan” is going to be repaid. There isn’t the money there now. So the only way the “loan” is going to be repaid is if there is a commercial investor or grant funds. Since we won’t be in the EU that little source isn’t there. Please, somebody read up on the Maygen scheme and realise… Read more »
Vote Up120Vote Down
Angela Hewitt

Why is David Pugh being given so much credit at being able to run County Hell??

Democracy, what a joke, nepotism and the masons right there.