£132k owing, some to Island companies and The Bees

The Summer Madness gigs promoter, Homegrown Events, has gone into insolvency the CP is reporting. 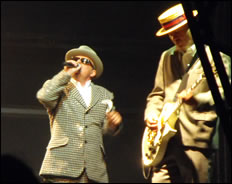 They say that the company has around £132k of unpaid bills, with creditors including, “Isle of Wight Council, Biffa, sound and lighting specialists Spyder UK and Island band The Bees, which is owed half its appearance fee for last year’s Summer Madness.”

Stuart Dungey, who owns Froglands Farm, Carisbrooke, where the gigs were held, is quoted as saying, “I was looking forward to having a third Summer Madness at the farm. But if I was approached again about another one, I would want a guarantee everyone would be paid.”

newest oldest most voted
no.5

Wouldn’t the the first time that John Curds festivals have collapsed into insolvency with loads of creditors, only a few years ago he did the same with Fflam Festival in Swansea

As usual, the dumb coouncil don’t get paid up front, despite the organisers track record. Still, it’s not their money is it, Beynon and his mates will still get paid however incompetent.

Vote Up00Vote Down
Pete
I work in this industry and unfortunately promotors on this Island, large or small, think its their god given right to pay suppliers after the event, out of the ticket money. Unless you are John Giddings, Promotors do not have money and are usually bad payers! Some customers look at me oddly when my company demands money and a cash deposit before the gear goes out. As… Read more »
Vote Up00Vote Down
Pete