The new sitcom, starring Joe Wilkinson of 8 out of 10 cats does Countdown and Diane Morgan of Cunk on Britain and a host of others, including Kim Cattrall (Sex and the City), is filming now. 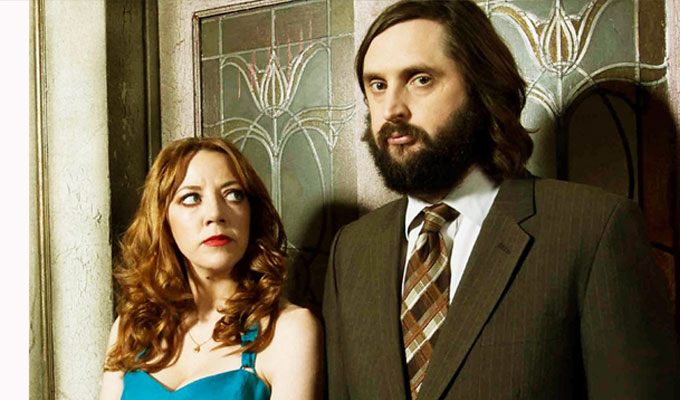 A new TV sitcom is being filmed on the Isle of Wight – and it’s got the potential to be a real cracker.

‘The Cockfields’ starts Joe Wilkinson (8 out of 10 cats does Countdown) and Diane Morgan (Cunk on Britain) and a host of others, including Kim Cattrall (Sex and the City).

Wilkinson stars as Simon, who is taking girlfriend Donna (Morgan) back home to the Isle of Wight for the very first time. There they’ll spend a long weekend as guests of his ever-doting mother Sue (Johnston) and controlling stepdad Ray (Ball).

40th birthday
Simon has been persuaded to mark the occasion of his 40th birthday back at the Cockfield family home and there’s a fair amount of Isle of Wight fun in store for the pair of them, alongside interruptions from Simon’s Alan Titchmarsh-obsessed stepbrother David (Ben Rufus Green, Alan Partridge’s Scissored Isle) and the Cockfields’ oddball handyman neighbour Andre (Jeff Mirza, Man Like Mobeen).

If that wasn’t enough, Simon’s father Larry (Havers) and his new American girlfriend Melissa (Cattrall) are causing tensions to rise. Can Simon survive a long (very long) birthday weekend with his biological and extended family without losing his cool, or his girlfriend?

“The Cockfields is a thoroughly modern family comedy about a relatable shared experience – that weekend back at home when your no doubt well-meaning relatives just get more and more annoying with every passing hour.”

The Cockfields will air on the UK comedy channel Gold later this year.

Thanks to Matt Edmunds for the tip after seeing it on Comedy.co.uk

Gold is on Sky, not for me then!

Jo’s best man was (we’ll still is) a guy called Simon Cockfield, who I know through work. I’m assuming he’s aware of the programme but I have just sent him the OTW link and asked if they want any extras?;)
Either very cool or embarrassing having someone use your name in a comedy- depends how good it is I guess.