As recently reported by OnTheWight, UK Oil and Gas confirm they’ve given up the licence for oil exploration off the coast of Compton but say their sights are now set on drilling in Arreton from 2019. 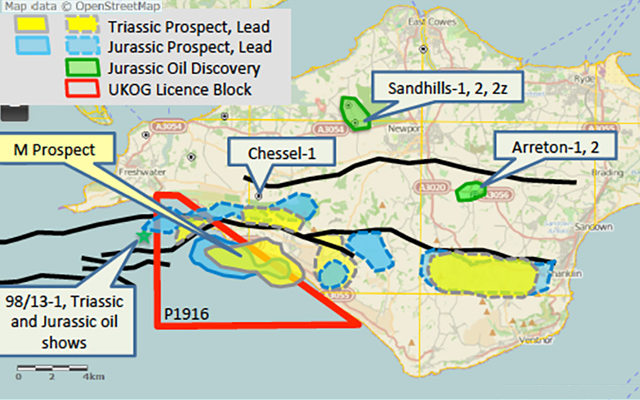 As reported last week, UK Oil & Gas Investments PLC (UKOG) have announced today they will not be pursuing any oil exploration in the area off Compton, Isle of Wight.

The announcement explains that due to “low geological prospectivity, high environmental sensitivity and consequential high associated drilling costs” the company have allowed the license to lapse.

227 million barrels of oil
However, UKOG also has licences to drill in other parts of the Isle of Wight, and the announcement goes on to say,

The company say “regulatory permitting activities are now underway to permit a planned appraisal drilling campaign in the first half of 2019”.

“The Arreton discovery on the Isle of Wight’s remains a key element of the company’s 2018 and 2019 growth strategy and plans.

“We look forward to working with our partners towards a successful 2019 appraisal drilling campaign.”

Gives with one hand, slaps with the other
Responding to the news, Keith Taylor, Green MEP for the Isle of Wight and European Chair of the Climate Parliament, said:

“While UKOG gives with one hand, by surrendering its Compton Bay drilling licence, it slaps the people of the Isle of Wight in the face with the other, by announcing destructive plans for onshore drilling in the village of Arreton.” 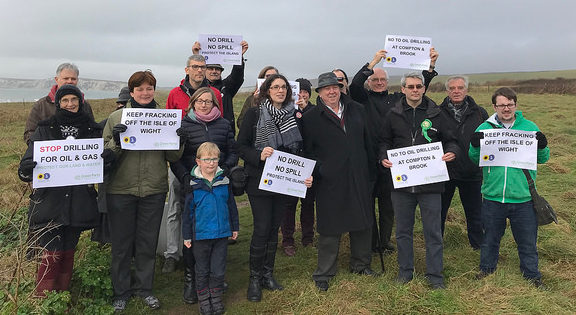 Mr Taylor visited the Isle of Wight on Saturday 20 January to campaign against oil and gas drilling on the Island. He added:

“Greens on the Isle of Wight are fighting doggedly against an oil and gas industry in bed with a Conservative Government that cares neither for the beauty of this precious Island nor the urgent reality of climate change. The further exploitation of oil and gas resources either by conventional or unconventional means is a form of dangerous climate denial, especially when the Island has the capacity to be a world-leader in renewable energy production.

“Earlier this month, two reports from scientists at NASA and academics at the University of Manchester revealed that not only is the oil and gas industry one of the least sustainable it is also the most responsible for the accelerating global emissions of climate-destructive methane. Methane is more than 80 times more damaging to our climate than CO2 emissions. At the same time, the UK Government’s own Climate Change Committee concluded that unless immediate action was taken Britain will fail to meet its legally-binding climate agreements by a huge margin.

“I will stand by the local campaigners and residents who will be fighting to protect their environment, their communities and the planet by opposing UKOG’s plans tooth and nail.”

Thanks to Andrew Nordbruch for the heads-up

newest oldest most voted
iowlady18
Regarding the dropping of offshore licence P1916 by UKOG. It is good news. We were aware during December 2017 that this licence had disappeared from UKOG and OGA documents, but no public announcement was made to investors so we remained sceptical. We were not sure if they were planning to re-negotiate to extend the 31st January expiry date, or whether the licence was being transferred to a… Read more »
Vote Up13-1Vote Down
Sally Perry

I guess the “low geological prospectivity, high environmental sensitivity and consequential high associated drilling costs” for P1916 as claimed by UKOG would make it unattractive to others.

Only in the current economic climate. The war is only won when the government ban fracking, gas and oil drilling and remove the licence for the Isle of Wight.
Considering the worrying news from Arreton today – that’s not going to happen any time soon.

Still up for a bit of quarrying and tree felling though?

And quarrying is OK then is it Vix?
I’m probably not the only one to say that I struggle to take anything you say seriously now!

If you consider quarrying “childish” then perhaps you could explain why?

No tree felling – actually plant forests including a large forest named after Shorwell resident Bob Keats which islanders visited last year. Plus maintaining tortoise reserves, mountain tracks etc.
Not sure why a serious story about the climate crisis caused by fossil fuel exploitation turns into something about me. Apart from a lame attempt to stop people talking about imminent oil drilling on our island.

Vix. From a reply written by yourself on this site – ‘They have planted 1400% more trees than we have felled in the last decade’. ( Poor English is yours and not a typo by me ).
By the way, I was all set to vote Green at the last election until you turned every issue into something about you.

Thanks to following UKOG operations at Horse Hill we already know what to expect. https://www.youtube.com/watch?v=ZrNB3DeqXog&feature=youtu.be

Interesting UKOG only release this after complaints were made to their nominated advisors, as we already know the licence was surrendered on 18th December. If this is how they treat their investors, gawd help the rest of us!

It is worth noting that out of the 227 million barrels identified in the headline, only 15.7 million are deemed to be recoverable under the acidification techniques to be used.
Check out Drill or Drop for further details https://drillordrop.com/2018/01/31/ukog-confirms-surrender-of-isle-of-wight-exploration-licence-six-weeks-after-it-happened/

Vote Up12-13Vote Down
Jacky
Thanks for all the information Vix Lowthion and ISLAW, glad to know there are people on the case here and fully supporting Frack Free Isle of Wight. The Green Party have shown all over the country that they are willing to stand by protesters ,we may be glad of them on here in Arreton soon. Why don’t some of the commentators on here put their energy into… Read more »
Vote Up8-8Vote Down