Over 100 residents attended a meeting on Saturday to explore options of Undercliff Drive being reopened to through traffic, becoming a ‘quiet road’ and other suggestions. Vix Lowthion who chaired the meeting shares her report. 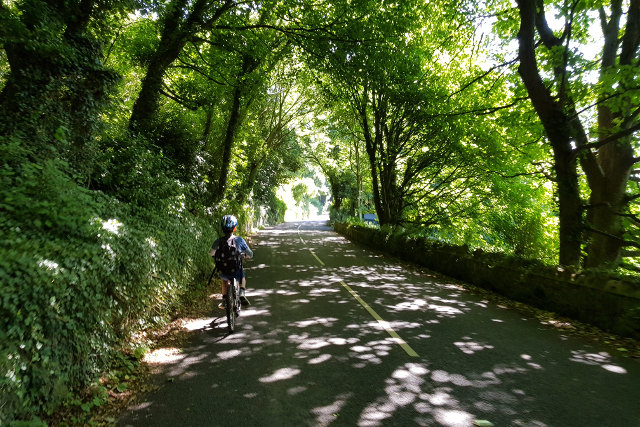 Vix Lowthion shares the following report on behalf of the Isle of Wight Green Party. Ed

Over 100 local residents packed into Niton Village Hall on Saturday 28th July to discuss the possibility of re-opening Undercliff Drive to all traffic.

The meeting was prompted by an event in Spring 2018, four years on from the most recent landslip which resulted in the closure of the road for through motor traffic, where local councillor and leader of the Isle of Wight council, Dave Stewart, presented the findings of a Bournemouth University Impact Study.

It claimed the closure of the road costs the local economy £1.4 million a year, and thus justified Cllr Stewart supporting the cost of engineering work at over £1.5 million to fully reopen the road to all traffic.

“Poor quality research” slammed
However, an increasing number of residents in Niton and St Lawrence attended the lively and energetic meeting, to voice their concerns over the “poor quality research” which underpinned the Impact Study (embedded below), and that there were many benefits to the area brought by experiencing reduced traffic over a number of years.

It became apparent throughout the meeting that there is no clear agreement to support Cllr Stewart’s plan to fully reopen the road.

Promote area for tourism
Many locals voiced concerns about the stability of engineering schemes, and support for developing and promoting the Undercliff area as a destination for walkers, cyclists and tourism.

In contrast, others wished to see a return of the road to its previous state with capacity for heavy traffic, mentioning loss of tourist amenities, the economic effects on local businesses, and the loss of public transport links.

Other concerns
Additional comments were made about the relationship between the road closure and that any long-term access solution must first attempt to tackle the complex issues surrounding drainage and geological slippage on the Undercliff.

In particular, inadequate signage regarding the closure – particularly on the Niton end – was leading to driver confusion and delayed access for the emergency services.

Signage must be tackled
There was unanimous agreement that improvements must be made immediately to signage in the area, and to lower speed limits to protect cyclists and families.

There was widespread dissatisfaction with the Council who have delayed tackling these issues for too long.

Short, medium and long term needs
The meeting listened to the full range of views and was chaired by Vix Lowthion from the IW Green Party.

“It is now very apparent that there is no local consensus in support of reopening Undercliff Drive to all traffic. Views were aired and discussions were heated.

“In the short term, the IW Council have to rectify the problems of speeding traffic and confused drivers.

“In the medium term, a full investigation is needed into the geological stresses faced in the area. But in the long term, along with the Military Road on the Back of the Wight, the future of Undercliff Drive must face the very real challenges brought by coastal erosion and consider the full range of options for protection, access and enjoyment – not just those dominated by vehicle traffic.”

A collection was made in support of the HIOW Wildlife Trust, with £49.08 to go towards their work in the area.

6 Comments on "Undercliff Drive: Over 100 residents share their views at ‘quiet road’ meeting"

newest oldest most voted
Colin
Yes, the road is bound to have some effect on the local economy, but £1.4million? Dream on. I would make the best of what now exists. Proper signage that is visible for a start. Then promote the area for what it is. A wonderful walk or cycle route with little traffic. Instead of fighting the land, try working with it. How about upgrading the Ventnor/Whitwell road so… Read more »
Vote Up32-5Vote Down
entropyjuggler

‘Instead of fighting the land, try working with it’

Is the lesson now facing humanity, in 8 words, spot on.

Vote Up17-2Vote Down
buckle
The Undercliff is a stunning asset and all options should be considered. Vix is right to open debate to consider other options. Like most things though, it all comes down to money both in the short term and in the long term for ongoing maintenance of whichever option is chosen. That the Undercliff is an area of geographical instability is true but that, per se, is not… Read more »
Vote Up13-3Vote Down
eddo

The property is in fact a Formed Public House, which failed due to lack of Trade

Of the 100 local residents I wonder how many were truly local and not nimby retirees? The road closure affects the businesses and residents of Ventnor so why not come and ask us Vix? On another note does anyone think Vix would have the bottle to chair a residents meeting in Brighstone regarding the state of The Countryman Pub?

Does being a retiree render people as non ‘local’?
As far as I’m aware the meeting was open to the all island residents, Ventnor included, I take it you went to voice your opinions and emphasise your views on the economic impact of ventor?
This is about a road built on a geological anomaly, what’s a pub got to do with it?